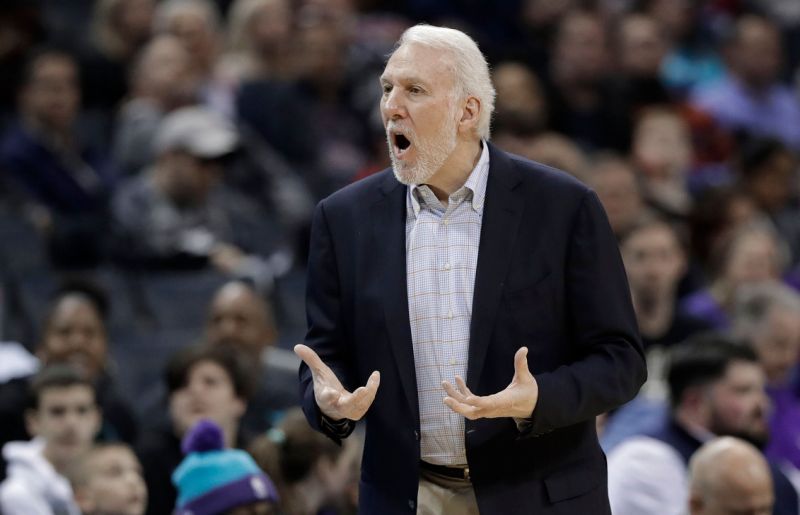 The San Antonio Spurs have long been the consistent contenders in the NBA’s Western Conference, but since the retirements of Tim Ducan, Manu Ginobili and Tony Parker the team has struggled to keep up with the ever-improving West. If the Spurs make the playoffs this season they will set a new record for consecutive playoff appearances, but it won’t be easy. The 2019-20 NBA season will boast the toughest Western Conference since Hakeem Olajuwon, David Robinson, John Stockton/Karl Malone and Clyde Drexler were battling it out for Western Conference supremacy.

Gregg Popovich is the undisputed greatest NBA head coach of all time, and it is his leadership that will dictate how far the Spurs go this season. The odd departure of Kawhi Leonard from the Spurs’ fold left a gaping hole in their offense, with LaMarcus Aldridge and DeMar ReRozan expected to step up and fill the void, but neither was up to the challenge last season. For the Spurs to make the playoffs, much less get past the first round, it will take more of the Popovich magic that Spurs fans have come to expect over the last two decades.

The Spurs have solid depth and a good one-two punch in Aldridge and DeRozan, but the problem is they don’t really have a Batman. Instead, they have two Robins, and you don’t win playoff series without a Batman. Aldridge is very capable of being the go-to guy for San Antonio, but unlike his idol Tim Duncan, Aldridge has never consistently been able to shoulder the burden of being the franchise cornerstone, role he was eager to cede to Brandon Roy while with the Portland TrailBlazers. The same is true of DeRozan, who was all too happy to defer to Kyle Lowry when he was a Toronto Raptor and is now trying to hide behind Aldridge when it matters most.

Although their scoring stats from last season are virtually a tie, LaMarcus Aldridge is by far the more efficient of San Antonio’s two stars. While DeMar DeRozan averaged 21.2 points per game for the Spurs, he shot just 48% from the field, as compared to Aldridge’s 52% shooting for his average of 21.3 points per game. Aldridge is more than capable of putting up All-Star numbers when he asserts himself as the leader of his team, but he simply is willing to do that night in and night out and that will be San Antonio’s undoing this season.

The Spurs are no longer the league-leading defensive juggernaut they were when Duncan, Ginobili, Parker and Bruce Bowen were all in their primes. As their core group got older, Popovich adjusted his gameplan to be more offense-oriented, and he never looked back. The best defender on the Spurs’ roster is LeMarcus Aldridge, who averaged 1.3 blocks per game last season, but he’s not exactly striking fear in the hearts of the opposition. It would be best for San Antonio is another player emerged as their best defender, perhaps point guard Dejounte Murray.

The Spurs spent much of last season without either of their assumed floor leaders: Derrick White and Dejounte Murray. This season, they expect to have both of them healthy and at 100% for the opening of training camp. The best hope for the Spurs to see improvement over last season’s disappointing finish is for one or both of their floor leaders to take significant steps forward, and under Gregg Popovich’s guidance there is no reason to believe that both players won’t do just that.

The biggest issue the Spurs have is that they do not have a consistent clutch threat. LaMarcus Aldridge and DeMar DeRozan ranked 24th and 32nd, respectively, in clutch scoring, meaning that games decided in the final moments were as likely to end in losses as wins. Barring an unforeseen circumstance, like Dejaunte Murray suddenly emerging as a clutch playmaker, the Spurs will need to be clutch by committee.

The Spurs didn’t exactly rock the world in free agency, most notably re-signing their own Rudy Gay rather than chasing one of the many big names in July. They did, however, land DeMarre Carroll in a three-team trade with the Washington Wizards and Brooklyn Nets. Carroll is a consistent threat from three-point range, meaning he will create space for both Aldridge and DeRozan to operate. He will also save wear and tear on Rudy Gay by filling some of the minutes Gay has been filling. The Spurs are going to win by committee, and Carroll is a solid addition to that effort.

The Western Conference is loaded with clutch players who can single-handedly lift their teams in game-winning situations. James Harden and Russell Westbrook, Antonio Davis and LeBron James, Kawhi Leonard and Paul George, Nikola Jokic and Jamal Murray, Donovan Mitchell and Mike Conley, Damian Lillard and Jusuf Nurkic…. Who will deliver for the Spurs? If they can’t find a legit and consistent answer to that question, Gregg Popovich’s playoff streak could be in serious jeopardy.