The AL East is one of the most competitive divisions every Major League Baseball season. Lets take a look as to what is in store for 2021. 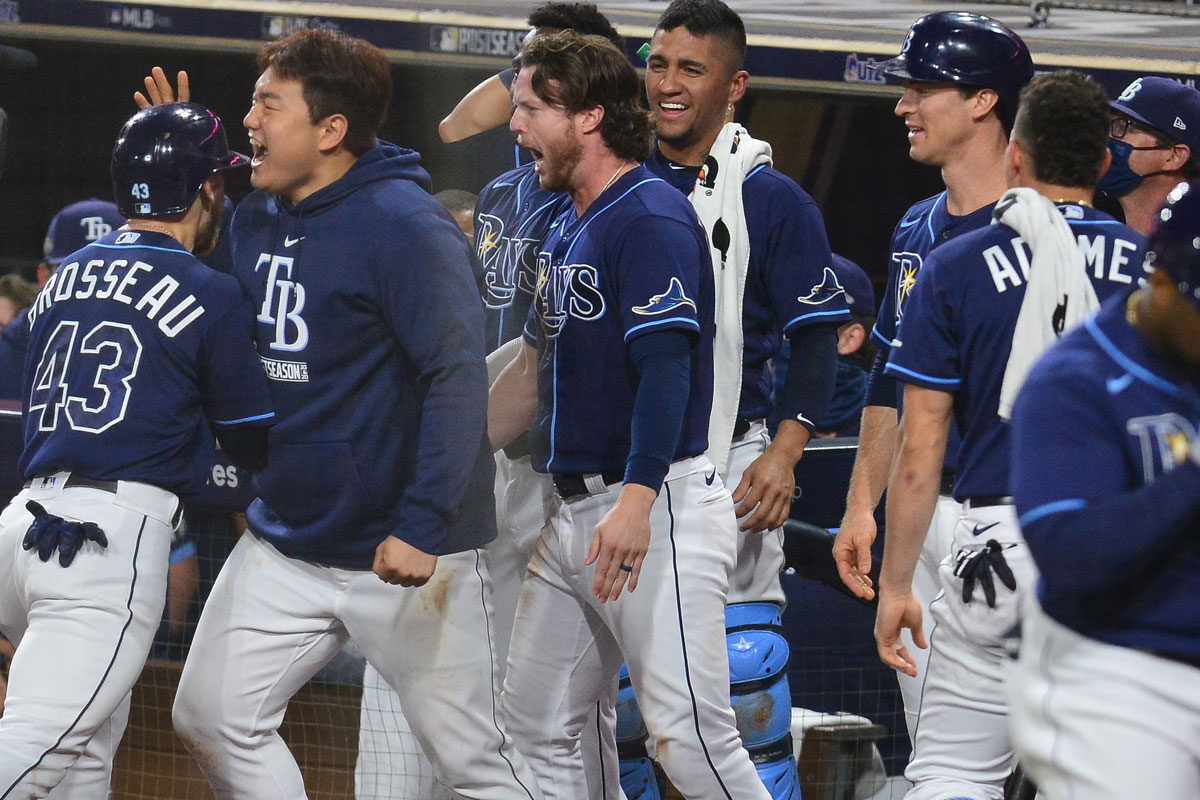 The American League East Division (AL East) has a lot to offer this 2021 Major League Baseball season. Some teams made drastic improvements, while others took strides back. Here is a preview of each team in the AL East going into the season:

Someway and somehow the Tampa Bay Rays finished first in the AL East last year. Unfortunately, their season ended after losing in the World Series to the Los Angeles Dodgers. This offseason, the Rays lost two key members of their rotation. They traded Blake Snell to the San Diego Padres and lost Charlie Morton in free agency to the Atlanta Braves. Luckily, they still have an ace in Tyler Glasnow who can hold down the fort. They also brought back Chris Archer in free agency and signed Michael Wacha to replace Snell and Morton. But, their rotation is definitely a downgrade from last year.

There is one main player to highlight on offense for the Rays. That is up and coming star Randy Arozarena who came out of nowhere last year in the playoffs. In fact, he set a record for the most home runs ever in one postseason. He is a power hitter on a team that wins by getting on base and his bat is necessary in order to produce runs. Brandon Lowe also helps the Rays in the power department and could play a big role as well. Someone who would also help produce runs is the number one MLB prospect, Wander Franco, who may possibly be called up this year. Especially, considering the Rays’ bullpen is lacking this year compared to some of the teams in the MLB, so they will need heavy hitters on offense.

In order to be competitive, they’ll have to lean on their starting rotation again this year and utilize the big guns at the back of their bullpen. These include Diego Castillo and Nick Anderson who both pitched phenomenally in relief last year. Anderson will be out until past the All-Star break, as it was announced on Thursday that he has a partial tear of an elbow ligament. In addition, the Rays will need the stellar defense they brought to the table in the 2020 season to compete. Many people believe the Rays have gotten worse, but there is still undeniable potential in their current roster.

The New York Yankees finished second place in the AL East before falling to the Rays in the American League Division Series last year. Their biggest moves to bolster the starting rotation were signing Corey Kluber and Jameson Taillon. Kluber only pitched one game before experiencing a season-ending injury. Taillon was out all of last year after undergoing two surgeries, but has looked good in Spring Training. The Yankees will need them healthy this year if they want a chance to win the AL East, given the loss of Luis Severino until sometime in the summer due to Tommy John surgery. Domingo German is returning to the rotation after serving an 81 game suspension due to domestic violence allegations. He showed promise before being suspended, but he has to be on top of his game as the Yankees cannot lean completely on their ace Gerrit Cole.

The Yankees lineup will look relatively the same this year after they re-signed Brett Gardner and D.J. LeMahieu. They have a lot of depth and promise but have been plagued by injuries these last couple of years. Their deep bench could be utilized more in 2021 to keep their stars rested such as Aaron Judge and Giancarlo Stanton. It is hard to keep those guys out of the lineup, but, if it means preventing injuries, it is definitely beneficial for them in the long run.

Clint Frazier will be a very interesting player to watch, as he finally will be starting in the outfield for the Yankees on Opening Day. He could be a real game changer in the lineup with his great power and speed. If he can get on base more consistently and strikeout less, the Yankees offense may be one of the best in baseball this year. But, they will need catcher Gary Sanchez to return to form as well after a down year, as he is one of the most pivotal parts of their offense.

In addition, the Yankees bullpen will have to be stellar once again which should be expected. The additions of Darren O’Day and Justin Wilson will be key to the success of the team. If they pitch like they did last year, opposing hitters in the AL East will struggle. Plus, you can never forget the lefties at the back end of the bullpen in Aroldis Chapman and Zack Britton. Britton will be out for some time to begin 2021 as he is recovering from elbow surgery. Consistency is a vital aspect that the Yankees need this year in order to bring another title to the Bronx.

In the 2020 season, the Toronto Blue Jays finished third in the AL East. Their biggest loss is Taijuan Walker who signed with the New York Mets this offseason. However, they managed to bring in Steven Matz through a trade with the Mets. Despite this, the Jays still lack a solid rotation as no one besides Hyun Jin Ryu has been exceptional. Young right-hander Nate Pearson will have to live up to his potential for them to have a chance to win the division. Other starters such as Tanner Roark and Robbie Ray have had periods of success in their career. With that being said, they have not pitched well for the Blue Jays and it is hard to know what to expect from them.

On offense, the Jays added three-time All-Star outfielder George Springer and shortstop Marcus Semien. Springer was the big addition and can provide veteran leadership in the locker room along with Semien. The Jays’ young talent includes three sons of former MLB All-Stars in Vladamir Guerrero Jr., Bo Bichette, and Cavan Biggio. They also have Teoscar Hernandez and Lourdes Gurriel Jr. who should continue to improve as well. Their high-powered offense has the likelihood to produce a lot of runs, which could win them some tough games.

The Jays added closer Kirby Yates to their bullpen, but he will likely miss the season due to Tommy John surgery. They also brought back David Phelps who has had success with Toronto in the past. But, the Blue Jays are not even playing in their home ballpark to begin the year. Instead, they will begin the 2021 season playing at TD Ballpark in Florida. This could have an impact on the players in some way or another. Overall, the Blue Jays’ young and inexperienced roster could be the key to success or the ticket to their downfall.

Honestly, I would not be surprised if Baltimore Orioles fans would mind finishing fourth in the AL East division again in 2021. It is a miracle they beat out the Red Sox last year. The Orioles are a historic organization, but as we know, they are in rebuild mode right now. Their ace currently is John Means who had a rough 2020 season, but look for him to bounce back strong. The most notable names on their entire pitching staff besides him are Felix Hernandez and Matt Harvey who are way past their prime.

Even though they have had their struggles in recent years the biggest positive for the Orioles this year is that they are getting Trey Mancini back. Mancini posted incredible numbers in 2019 before missing the 2020 season as he was battling stage 3 colon cancer. But he is back now, and will once again take the field at first base. They also went out and got third baseman Maikel Franco in free agency who will provide another big bat in the middle of their lineup.

Plus, the Orioles have some other young pieces that should continue to improve in Anthony Santander, Cedric Mullins, Austin Hays, and Ryan Mountcastle. The Orioles won’t be contenders but any improvement for them at this point is progress. Keep an eye on former 2019 number one pick Adley Rutschman as even though it is not likely, do not rule out the possibility of him making his big league debut this year. Even if the offense performs very well the Orioles will have to maintain some sort of consistency in the starting pitching department to even have a chance to contend in 2021. Do not get your hopes up for the Orioles to do anything special. But, if they prove me wrong, I’ll give them a tip of the cap.

Probably the biggest surprise in the AL East last year was the Boston Red Sox finishing last. This was something that had not happened since 2015. But, this year the Red Sox brought back manager Alex Cora for a second stint with the team. They fired him back in early 2020 due to his involvement in the Astros cheating scandal.

In addition, last season the Red Sox were missing their two top starting pitchers. Their ace Chris Sale underwent Tommy John surgery over a year ago but will still be out to start the year. The hope is he will return sometime mid-season. Eduardo Rodriguez had a heart issue related to COVID-19 last year and could not pitch. Rodriguez is back and healthy, however, and should get the ball on Opening Day. Nathan Eovaldi will likely be behind Rodriguez in the rotation. He has been a consistent pitcher the last couple years and should provide some stability for the Red Sox.

The Red Sox offense is loaded with talent but they struggled last year in a shortened season. If they get back on track opposing teams may struggle pitching to them. Watch out for young guns Rafael Devers, Alex Verdugo, and Bobby Dalbec this year as they provide a lot of pop to the Red Sox lineup. New addition Enrique Hernandez will fill the hole of now retired second baseman Dustin Pedroia. They also added Hunter Renfroe who will help defensively in the outfield after the Red Sox lost outfielders Jackie Bradley Jr. and Andrew Benintendi. Xander Bogaerts should continue to play at an elite level and J.D. Martinez will look to have a bounce back year. The lineup has to get hot and stay hot. The Red Sox will not have a shot if they go through cold spells.

The bullpen for the Red Sox does not look much different as most of their offseason additions came on the offensive side. They did add former Yankees reliever and grizzled veteran Adam Ottavino. It likely will be him or Matt Barnes in the closer role. The bullpen is definitely the weakest point for the Red Sox right now. If they can bend and not break who knows where the Red Sox will be come the postseason.