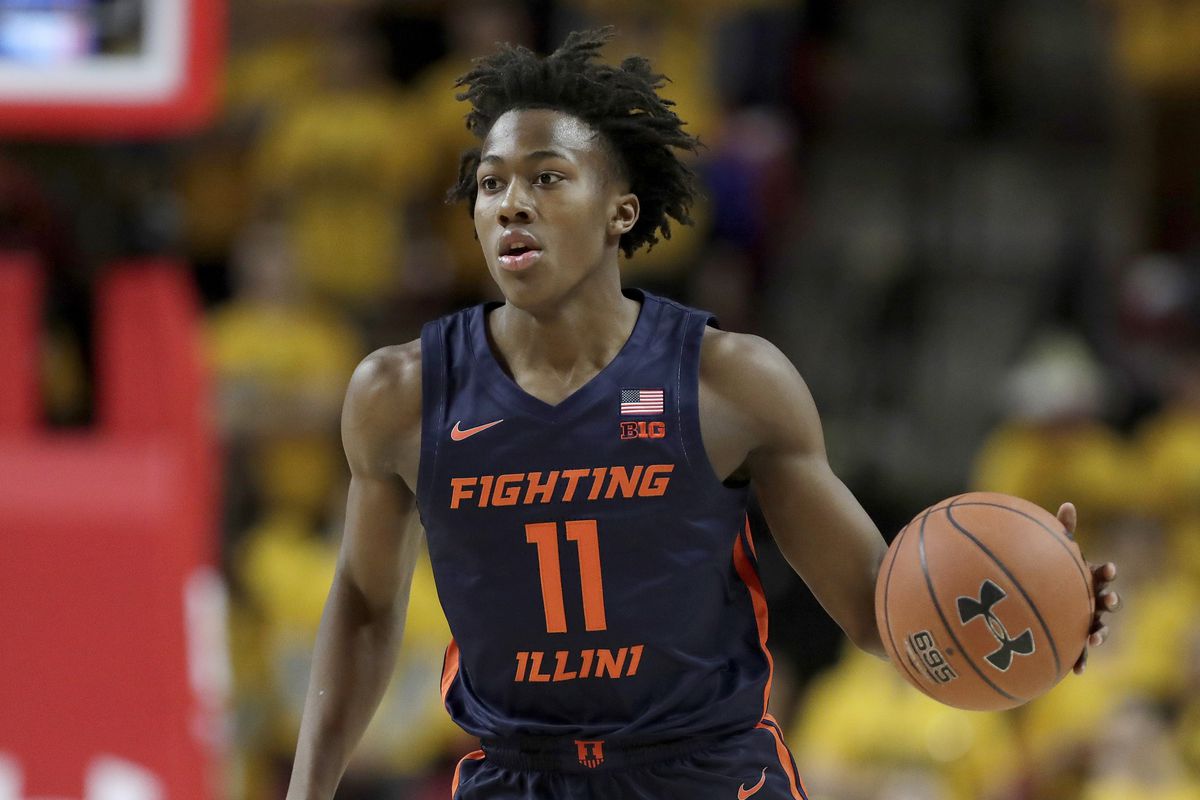 Just because a player gets selected in the lottery, doesn’t guarantee that they’ll become a star, let alone a starter. Every year there are teams that miss on lottery selections while there are players who fall outside of the lottery who end up overachieving in the NBA and the 2021 NBA Draft will be no different. Some notable players in recent memory who were drafted outside of the lottery consist of Giannis Antetokounmpo (15th overall in 2013), Kawhi Leonard (15th overall in 2011), and Nikola Jokic (41st overall in 2014 and one of two MVPs to be drafted in the second round). Here’s a look at picks 15-30 in my post lottery mock draft.

Analysis: Although this would be the third year in a row that the Wizards would take a wing, the Wizards need a player to space the floor, and Moses Moody is the best option available. Not only can Moody shoot the three, he can score from all three levels and has shown flashes of playmaking and defensive potential. Moody recently turned 19 so he still has a lot of room to grow his already polished game.

The Oklahoma City Thunder could use some scoring help in the backcourt to help out Shai Gilgeous-Alexander, who seems to be their franchise player. Their best option available would be to draft James Bouknight from UConn. He’s a great athlete that is wired to score but will have to improve as a playmaker as well as using his athleticism to his advantage on the defensive end.

Last month, fellow BackSportsPage writer Adam Teich wrote an article called The Memphis Grizzlies Have a Sixth Man Problem. To that end, I mean it in the kindest sense when I say that they could use an irrational confidence player off the bench, and Cameron Thomas is the best player available who fits that description. Thomas is capable of scoring from all three levels but will have to prove that he’s not just a one-dimensional player. He’ll have to improve as a playmaker as well as show more effort on the defensive end.

Analysis: It’s a common theme for international players to fly under the radar until it gets closer to the draft. We see it every year. That being said, Alperen Sengun is an 18 year old center who has an advanced back to the basket game with playmaking skills and an improving perimeter shot. However, he’ll have to continue to grow his  outside shooting along with his defensive technique to compensate for his lack of athleticism in order to succeed as an NBA-level player. As for the Thunder, this would be a good gamble to take and he fits the youth movement of the organization.

Analysis: This offseason, the Knicks could potentially lose both of their point guards asDerrick Rose and Elfrid Payton enter unrestricted free agency. Ideally, the Knicks should take a look at a point guard who is ready to play under the bright lights. Just months ago, Jared Butler won Final Four Most Outstanding Player on college basketball’s biggest stage. Butler is a combo guard who is capable of shooting off the dribble as well as on the catch. He’s also capable of wreaking havoc on the defensive end which is how he will earn his minutes playing under Tom Thibodeau.

Analysis: Going into last season, Tre Mann was perceived to be a highly touted prospect who could have perhaps been a first round pick in 2020. However, Mann didn’t perform as well as expected. This past season, he came back a better player and reportedly grew 2 inches (from 6’3” to 6’5”) which will raise his draft stock even more. As far as his skill set is concerned, he’s a three level scorer who can operate out of the pick and roll as well as use a floater as a weapon when getting a foot into the paint. However, he’ll have to improve as a finisher around the rim which can be attributed to his average athleticism. As far as his fit on the Hawks, they desperately need another ball handler next to Trae Young. Although the Hawks have Kris Dunn, he’s an upcoming free agent and hasn’t seen consistent playing time this season. Therefore, Mann makes a lot of sense in Atlanta.

Analysis: In all likelihood, the Lakers are probably going to trade this pick. However, if the Lakers were to keep their pick, they would ideally draft a point guard that is ready to play in prime time games. Out of all of the guards remaining on the board up to this point, Dosunmu seems to be the most ready for that situation. The only thing working against him is that he’s a jack of all trades but a master of none at the guard position. That being said, he possesses the basketball mind that a contending team like the Lakers would look for.

Analysis: Before the season started, Ziaire Williams was a projected lottery pick. However, he didn’t have the season that many scouts thought he would have, mainly because of injuries and inconsistent play. That being said, Williams is worth taking a chance on and his upside isn’t something that should be overlooked. A team like Houston is probably the best scenario for Williams’ early development while also earning minutes in the NBA.

Analysis: Just like the Ziaire Williams selection, the selection of Isaiah Jackson is a swing for the fences. A team like the Rockets is an ideal situation for him since they’re rebuilding. Jackson is one of those prospects that teams are going to have to be patient with. With the proper development of his skills all-around, the Rockets will be glad they took a chance on him.

Analysis: If not for his poor shooting percentages (39% from the field and 22% from three point range), Sharife Cooper would be a lottery pick. That being said, Cooper is arguably the best pure point guard in the entire draft. The most impressive attribute about Cooper is his ability to deliver on time, on target passes with either hand similar to Trae Young. However, if he wants to have a long career in the NBA he’ll have to improve his outside shot.

Analysis: Although Springer doesn’t fit the direction of the Denver Nuggets, it never hurts to add youth to your roster. Also, the Nuggets could use a versatile backup guard, especially knowing that Will Barton will be an unrestricted free agent this offseason. A lot has been made about Springer’s age (18 years old; doesn’t turn 19 until September) which is something that can work in his favor but can also work against him depending on where he falls in the draft. In Denver he won’t have as much room for error whereas teams such as Houston or Oklahoma City would give him more freedom to make mistakes and learn from them. Overall, Springer is a jack of all trades but a master of none will have to prove that he can make 3s with consistency at the next level.

Analysis: The Brooklyn Nets desperately need a rim protector and there’s no better option left on the board than Charles Bassey who was once a highly touted prospect coming out of high school. Bassey is also a lob threat who has shown flashes of an ability to knock down outside shots. That being said, Bassey still needs to improve his overall feel for the game but that should come with experience, especially on a championship contending team. In Brooklyn, Bassey won’t be asked to do much except be a rim protector and a lob threat in transition and out of pick and rolls.

Analysis: In today’s NBA, you can never have enough shooters. Although Johnny Juzang didn’t have the performance many scouts expected from him at the Draft Combine, his film from the NCAA Tournament should be more than enough for him to be selected in this year’s draft. He may seem like a reach in the first round but Juzang is more than just a shooter. He showed that he can score from all three levels, especially under the bright lights of the NCAA Tournament. However, he will have to improve as a defender if he wants to earn playing time during the early stage of his career.

Analysis: This offseason the Phoenix Suns could potentially lose Cameron Payne who has been a key contributor to their playoff success in free agency. Along with Payne, combo guards Langston Galloway and E’Twaun Moore will also become free agents. This opens the door for an under the radar guard prospect like Nah’Shon “Bones” Hyland who really helped himself at the NBA Draft Combine recording 17 points, 5 rebounds, and 4 assists in a scrimmage. At VCU, Hyland ran the show at point guard but the Suns would likely ask him to play both on and off the ball since he’s a tweener at the guard position.

Analysis: During Mike Conley’s absence in the 2nd round against the Clippers, one of the major flaws that was exposed was the lack of a backup point guard on the Utah Jazz. Although Max Abmas isn’t a traditional point guard, you can never have enough scorers, especially on a contending team. Like Johnny Juzang, Abmas didn’t have the draft combine performance that many expected but his film from the NCAA Tournament should do him justice.

Where Do the 76ers Go From Here? Part 3: Tobias Harris
How Orlando Can Use this Offseason to Rebuild their Magic