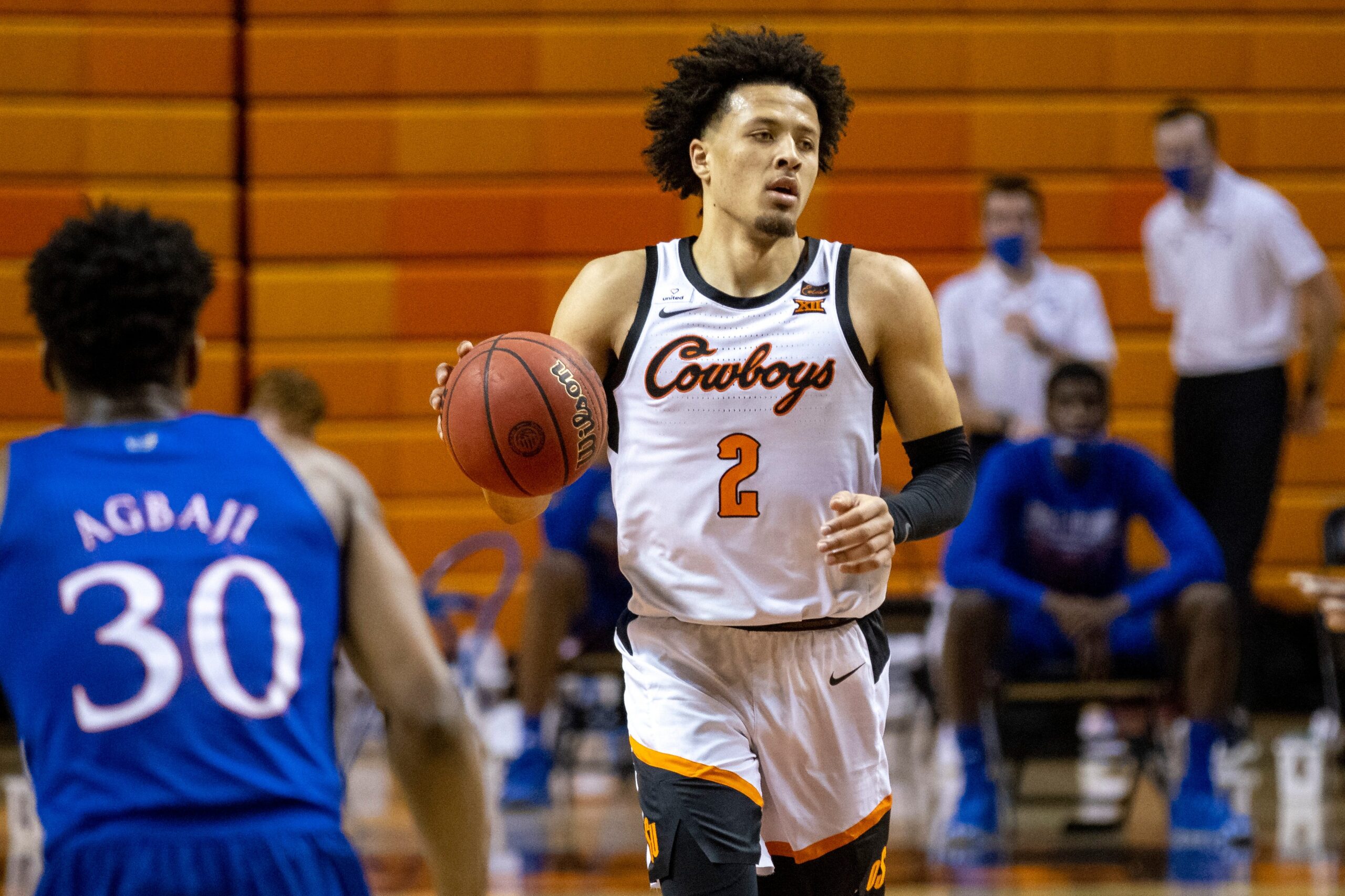 The Detroit Pistons landed the 1st overall pick in the 2021 NBA Draft after finishing with a 20-62 record which was second worst in the NBA. The last time the Pistons held the first overall pick was in 1970 when they drafted Basketball Hall of Famer Bob Lanier out of St. Bonaventure. The Pistons were tied with the Houston Rockets and Orlando Magic for the highest odds to land the first overall pick at 14 percent. It’s also worth noting that the Toronto Raptors made the biggest jump from potentially landing the 7th overall pick to landing the 4th overall pick in the which landed them a top 5 pick for the first time since 2011 when they selected Jonas Valanciunas from Lithuania. Although there were no trades in the lottery last year, the draft order isn’t set in stone. With that said, let’s see how the 2021 NBA Draft could potentially shape up after all of the lottery picks have been revealed.

Analysis: Although the Detroit Pistons took Killian Hayes last year with the 7th overall pick, the Pistons’ strategy should be to draft the best player available and figure the rest out. Had the Pistons ended up with a lower pick, Evan Mobley would have been the no-brainer and still deserves consideration for being the first overall pick. That being said, Cunningham seems to be a generational talent and it would be foolish of the Pistons to pass on a prospect that is arguably the most complete draft prospect of the past 10 years.

Analysis: Many mocks probably have Evan Mobley being selected with the second overall pick. However, I decided to go in a different direction. With an aging John Wall seemingly out the door, it makes sense to pair Jalen Suggs with Kevin Porter Jr. If Suggs can improve his outside shooting percentages as well as grow into the defender that many draft experts are billing him to become, the Rockets’ future all of a sudden looks a lot more promising.

Analysis: Although the Cavaliers have Jarrett Allen at center, we as fans can’t be so sure on whether Evan Mobley is a 4 or 5.He’s not quick enough to guard smaller 4s but doesn’t possess the toughness to guard NBA 5s as of yet. Overall, if Mobley develops into the franchise big man that many scouts believe he can become, the Cavs will be glad they drafted him but time will tell.

Analysis: In my last mock, I had Jalen Green slipping to the Toronto Raptors with the 7th overall pick. In this scenario, Green ends up on the same team but would be earning more money than he would have in the last scenario. Fred VanVleet is going to need a backcourt mate with the upcoming free agency of Kyle Lowry and Gary Trent Jr. The good thing about VanVleet is that he’s capable of playing either guard spot so whether or not the Raptors draft a point guard or shooting guard won’t hurt him. As far as what Green would give to the Toronto Raptors, he is a world-class athlete who can score from all three levels. However, he’ll need to improve on the mental aspect of his game which is the difference between him becoming an irrational confidence player versus a star at the next level.

Analysis: The Orlando Magic could use some youth and athleticism at the wing and Jonathan Kuminga gives them both of those qualities. During his time in the G-League bubble, Kuminga has flashed the abilities to score, handle, and set up his teammates for easy baskets. However, his feel for the game isn’t there yet. He could improve on becoming a more efficient scorer as well as showing more effort defensively.  If Kuminga applies himself on the defensive end at the next level, he and Jonathan Isaac could potentially cause problems along with Wendell Carter and perhaps Mohamed Bamba as their big men. At the moment, Kuminga is only 18 years old and is just scratching the surface on what he can eventually become.

Analysis: Like the Detroit Pistons, the Oklahoma City Thunder are in a situation where their strategy should be to draft the best player available. Scottie Barnes is one of those prospects that seems to have both a high floor and a high ceiling because of his high motor.  Barnes has the potential to become more than an energy guy but it all depends on how the Thunder use him.At the moment it is best to use him as a small ball five with the second unit. His best quality is that he has a legitimate chance to be able to start and guard all 5 positions. However, his outside shot is a major concern and can be the major difference in him becoming a star versus a glue guy.

Analysis: If the Warriors decide not to trade their two first round picks for a star, it is ideal that they draft players who are ready to play under the bright lights right now, especially if the Warriors dynasty wants to get back on their feet. Davion Mitchell certainly fits that description based on his performance during the NCAA Tournament. In this scenario,  Mitchell is a combo guard who can space the floor, defend, as well as give the Warriors the secondary playmaker they lacked this past season.

Analysis: Now that the Magic have selected Kuminga and Wagner (hypothetically), they’re redundant across all positions which can be a good problem to have for a young team that is trying to figure out their direction. Wagner is a versatile wing that can score from all three levels and shows some promise on the defensive end. He’s also shown flashes of being a jumbo-sized playmaker. The challenge for the Magic will be figuring out who they will be moving forward with as their core for the future. It’s also worth noting that he would be teaming up with his older brother Moe Wagner who also played at Michigan.

Analysis: The Sacramento Kings have lacked at the wing for years and especially on the defensive end.  Keon Johnson is arguably the best athlete in the entire draft and has the most upside left on the board up to this point. Not only that, he uses that athleticism to his advantage, particularly on the defensive end where he was a regular on the SportsCenter top 10. However, Johnson will have to improve his three point shooting if he wants to have a long career in the NBA.

Analysis: Last offseason, the New Orleans Pelicans made the mistake of not addressing the need for three point shooting. Even worse, they traded two of their best shooters in J.J. Redick and Nicolo Melli to the Dallas Mavericks for James Johnson and Wesley Iwundu, who aren’t known as three point shooters.  Passing up on Corey Kispert who is the best pure shooter in the draft would be a head scratcher for the Pelicans.

Analysis: Going into the season, Jalen Johnson seemed like a slam dunk as a top five selection in this year’s draft. However, a combination of injuries, inconsistent play and his decision to opt out of the season early have caused his stock to drop. Although the Charlotte Hornets have a logjam at the wing, you can never have enough versatile wings in today’s NBA. Johnson has the potential to become one of those players that has a better professional career than college career.

The San Antonio Spurs have a logjam at the guard and wing positions. However, they could use some help at the 4 or 5 positions, after the departure and retirement of LaMarcus Aldridge. Therefore, Kai Jones makes the most sense in this scenario. At this stage, Jones is considered a project. Luckily for him, Jones fits the direction that the Spurs seem to be headed which is going young. The Spurs are usually known for making the safe pick but this one would be a swing for the fences. Fans will have to wait a few years on Jones’ development in order to see the full extent of his potential but time will tell.

Analysis: Although Josh Giddey is only 18 years old, he has the experience of playing against grown men in the NBL which could prepare him to play for a team like the Indiana Pacers who could perhaps make it back to the playoffs next season. T.J. McConnell’s contract is set to expire, so the Indiana Pacers should look for a backup ball handler to replace him. Giddey has a long way to go in his development but his experience playing against grown men, although brief, shouldn’t be something scouts take for granted.

Analysis: Chris Duarte may seem like a reach at 14. However, as I mentioned with the Davion Mitchell selection, the Warriors ideally would want players who are ready to perform under the bright lights right now and do what is asked of them. As an older prospect, Duarte is ready for that. His role will be as a 3 and D guy who the analytics guys are going to love.

Where Do the 76ers Go From Here? Part 2: Doc Rivers
Is Khris Middleton too inconsistent in the Playoffs?