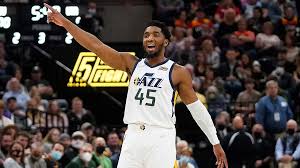 A tumultuous offseason for the Jazz saw them part ways with defensive stalwart Rudy Gobert, signaling the end of an era in Utah. Regular season success failed to translate to the playoffs, and a rebuild seems inevitable. Disgruntled superstar Donovan Mitchell has hinted that he wants out, with the New York Knicks emerging as the favorite to land the former Louisville guard. A possible mid-season blockbuster trade is on the horizon as the Utah front office looks to initiate a full on rebuild. Assuming Mitchell starts the season on the Jazz, let’s take a look at how the current roster could play out.

Mike Conley will once again be the starter, yet figures to be incongruent with the assumed rebuild considering his age and massive contract. A declining 34 year old with two years left on a 68 million dollar deal will prove difficult to move for Utah, as contending teams that could use Conley won’t have the cap space to trade for him. The only other point guard on the roster is second year player Jared Butler, who will have ample space to improve but likely will not exceed his expected backup role. Point guard is a position of need, and CEO Danny Ainge might need to look to the draft to find his point guard of the future.

Donovan Mitchell will handle any and all scoring duties assuming he’s still part of the team once the season starts. Injuries hampered him all of last season, and he’ll need to improve on his dwindling defensive showings to continue his progress towards All-NBA status. Unlike point guard, the shooting guard position in Utah has no lack of depth, consisting of Malik Beasley, Jordan Clarkson, Nickeil Alexander-Walker, Leandro Bolmaro, and Johnny Juzang. Clarkson and Beasley’s abilities are redundant on the same roster, as they are both high-scoring guards that can spark an offense off the bench, so look for one of them to potentially be traded.

Just months after acquiring stifling point guard Patrick Beverley from the Minnesota Timberwolves, Utah traded him to the Los Angeles  Lakers in return for forwards Talen Horton Tucker and Stanley Johnson. Known as THT across the league, he’s an interesting return for the Jazz, given his high ceiling, and will be given the chance to earn a starting berth. In LA, he demonstrated he could be a capable three level scorer, albeit only sparingly. Glaring inconsistencies and mental lapses will need to be eradicated from his game in order for his tenure in Utah to be a successful one. Italian rookie Simone Fontecchio will likely be dueling with veteran Rudy Gay for the backup minutes, while second year man Xavier Sneed could struggle to see the floor.

Bojan Bogdanovic has been an excellent player during his three year stay in Utah, playing the best basketball of his career. At 33 years old, however, he does not seem to fit a roster that could be destined to tank this season. Currently in the last year of his contract, Bogdanovic should attract interest from plenty of teams and a move seems likely. Behind him(for the time being) is a luxurious backup in Jarred Vanderbilt. A young, athletic player with a remarkable motor, Vanderbilt is much more consistent with Utah’s timeline than Bogdanovic and could contribute to the Jazz project beyond next season.

Rudy Gobert’s defensive presence at center was integral to Utah’s success over the past half decade, and they’ll need to address that void after he was traded to Minnesota in July. Walker Kessler, the 22nd overall pick in this year’s draft from Auburn, will help address some of those issues and should be a solid role player moving forward for Minnesota. The team’s only other true center, Udoka Azubuike, will almost surely see increased time on the floor, but his limited stints in the league so far haven’t shown much more than backup ability. This is certainly a position that will need to be upgraded in the future for the Jazz to return to the pinnacle of the Western Conference.

While Donovan Mitchell’s future hangs in the balance, the Jazz are essentially stuck in neutral. If Mitchell is offloaded, the tanking era will be fully underway and they can look to stockpile assets and target the draft. If Mitchell were to stay in Utah, it’s unclear if the Jazz would look to retool rather than rebuild, similar to what the Portland Trail Blazers have done after Damian Lillard committed his future to the organization. Either way, the immediate future looks bleak in Utah with the current construction of the roster. Look for the Jazz to miss the playoffs for the first time since 2015-16.