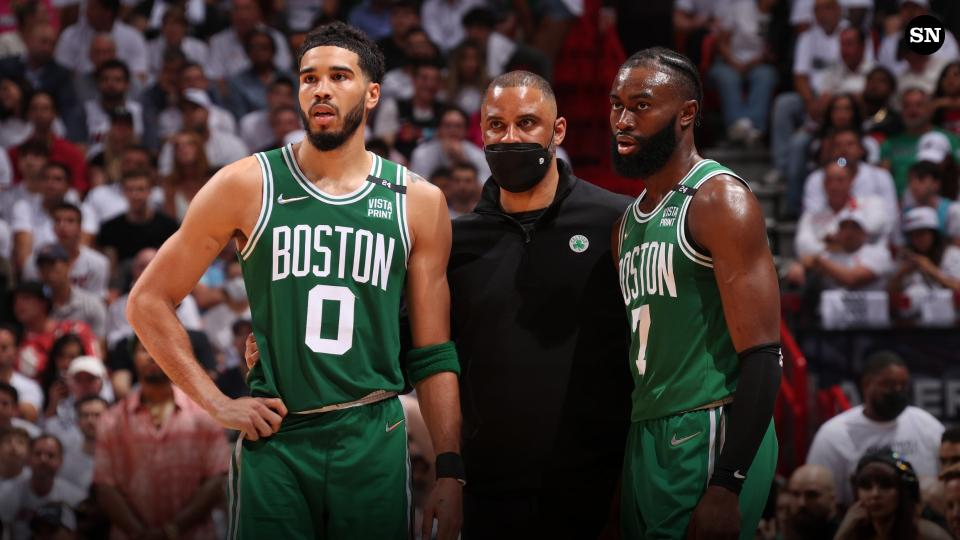 After their first finals appearance since 2010, the Boston Celtics only have one goal in mind… the Larry O’Brien trophy. The C’s finished with a regular season record of 51-31, good for 2nd in the Eastern Conference. They won 14 games in the playoffs, but were eventually halted by the Golden State Warriors in the finals losing four games to two. All eyes will be on the young superstars Jayson Tatum and Jaylen Brown next season with strict expectations of getting back to the finals.

Boston upgraded the point guard position this off-season bringing in Malcolm Brogdon from Indiana. At the moment, it looks like Marcus Smart will remain as the starter, leaving Brogdon with the 6th man role. The Celtics will also bring two more guards off the bench in Derrick White and Payton Pritchard. It is tough to see how these guys’ minutes will play out next season behind Smart and Brogdon. Nonetheless, this is a deep and young core of guards that can all step up in big moments.

Jaylen Brown will be the guy at the two guard. He averaged 23 points and 7 boards in the playoffs last season, and averaged 23 and 6 in the regular season. Heads have now turned towards Brown who is now considered a star in the NBA. Critics put a lot of emphasis on his turnover and efficiency numbers, which were a bit inconsistent last season. I think it’s the last hump he needs to get over to get to superstar potential. But first, let’s get him into an All Star Game…

This is Jayson Tatum’s team, and it is his time to prove he is one of the best players in the league. In the regular season Tatum averaged 27, 8, and 4 at just 24 years young. Like his running mate, Tatum also had the turnover bug during stretches of the regular season and the playoffs. Maturity on the court will be key going forward for Tatum as he enters his prime. At times, he can get frantic with the ball and try to do too much. He has a very solid crew behind him that can all make plays when needed. Trusting his teammates to get him the ball is what Ime Udoka preaches. If Tatum can lower his turnover numbers, he has the ability to take this league over completely.

There is a promising future at power forward for the Celtics. Currently the position belongs to 36 year old Al Horford. But if the Celtics can win a championship, there is a chance he could retire. This is where Grant Williams slides in. Williams (23) was a standout role player for the Celtics in the second half of the season. His toughness on the defensive end was on display against KD, Giannis, and Butler during Boston’s playoff run. Not to mention Williams led the NBA for most of the season in three point percentage. He proved throughout the playoff run, he can make shots and play within himself on offense. We saw a side of Grant Williams we never saw in his collegiate years at Tennessee. His lethal three point shooting ability. His breakout game in game 7 of the Eastern Conference semi finals, where he exploded for 27 points, 7-18 from three point range was the point Boston fans knew he was sticking around. Another glue guy they need.

The freakishly athletic Robert Williams lll is the man in the middle for Boston. One of the best shot blockers in the league and offensive rebounders. Coming off an All Defensive Second Team award, he is known for his put back dunks and blocks that reach the second row. Going into his fifth season, we are about to see prime Time Lord next season. We don’t see many energy guys at the center position anymore. A guy that can amp the crowd with one posturizing2 dunk. Williams lll gives us freakishly athletic plays on both ends of the floor. Expect Rob Williams to be another top defender on the league next year. Health issues have been a concern in the past, but if he can stay healthy he is easily a top 10 center in the NBA.

The Boston Celtics were a few turnovers away from a championship last season. They averaged three more turnovers per game than the Warriors in the finals. They now bring in Malcolm Brogdon who has one of the best assist to turnover ratios in the league.

The question is, can the Celtics stars limit the turnovers in the playoffs? The rest of the game is there. Defensively and offensively one of the most efficient in the league. They have all the tools, can they put the final piece of the puzzle together?