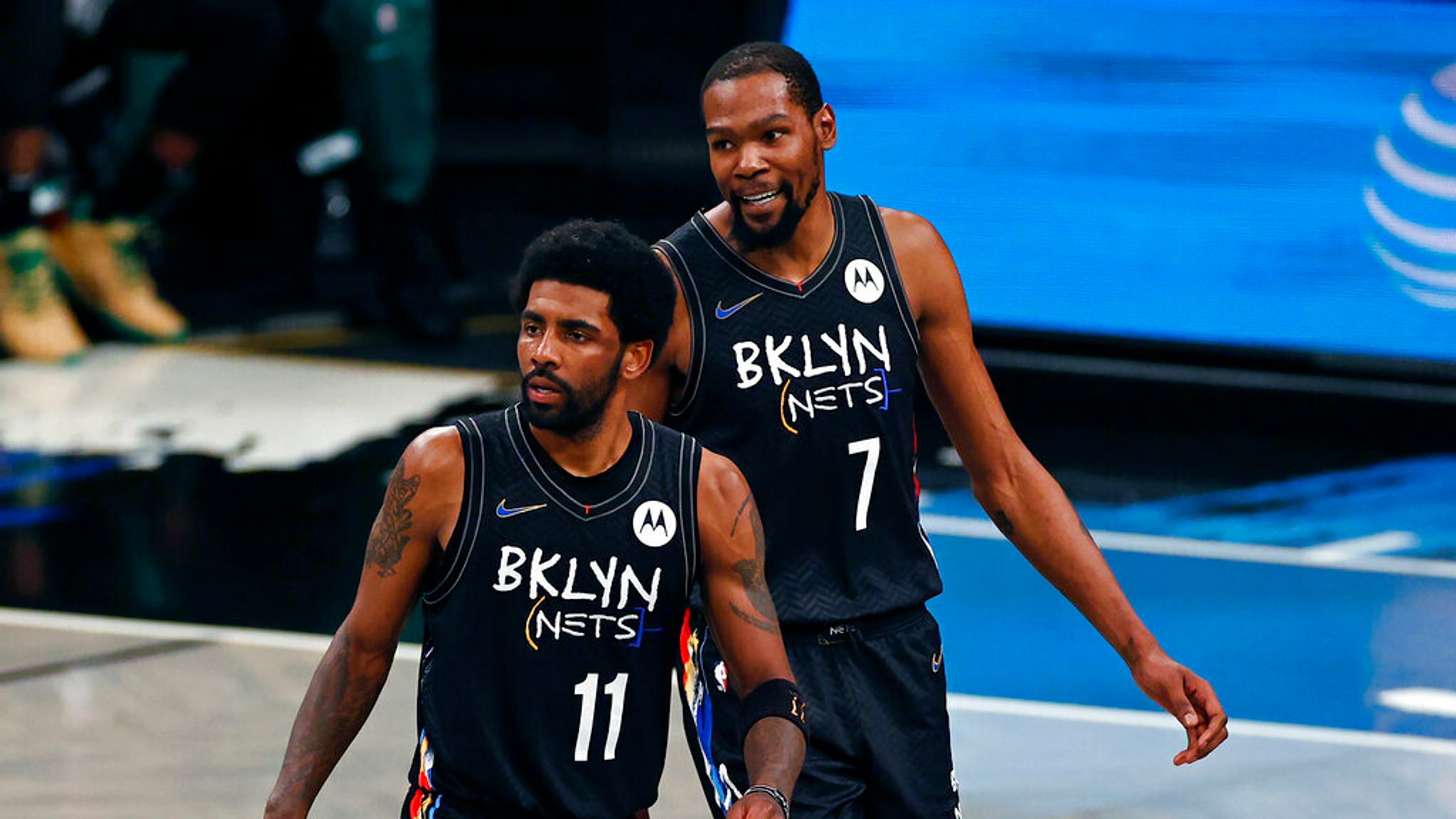 The Brooklyn Nets made the playoffs this past season as a seven seed where they were shockingly swept by the eventual Eastern Conference Finals Champion Boston Celtics. It is very common a seven seed loses to a two seed, however the Nets are not an ordinary seven seed. They have one of the best players on the planet in Kevin Durant and one of the more skilled point guards in the league in Kyrie Irving.

At the point guard position, the Nets are set with a star in Irving if he remains with the team. However, due to the vaccine and a two-week break during this past season, Irving only played in 29 games. In his three-year tenure with the Nets, he has only played in a mere 103 games out of a possible 226 which is not very good. Behind Irving on the depth chart is 2014 NBA Champion Patty Mills, who got his ring with the San Antonio Spurs. Mills in his first season with Brooklyn averaged 11.4 points per game while shooting 40% both from the field and the charity stripe.

At the shooting guard position, the Nets have two guys who are very similar as they are both sharpshooters in Joe Harris and Seth Curry. Harris averaged 11.3 points per game while shooting 46.6% from three. He is also a former three-point contest winner as he won back in 2019.

Harris only appeared in 14 games before missing the rest of the season due to needing surgery on his left ankle, but in those 14 games he shot 45.2% from the field and 46.6% from three averaging 11.3 points per game.

Curry, who is the brother of Stephen Curry, is not as big of a star as his older brother but similarly lethal from downtown. Curry was third in the league in three point percentage at 52.2% behind teammate Mills and Kevin Knox of the Atlanta Hawks.

The only knock on Curry is that he is an undersized shooting guard with a height of 6’2.

As mentioned earlier, the Nets have Durant who is one of the best scorers in this generation. The two-time NBA Champion and twelve-time All-Star averaged just under 30 points this past season. However, who knows if Durant will remain on the Nets as he mentioned his dream destination is to go to the Celtics to play with Marcus Smart.

This would not be the first time Durant left a championship caliber team to join another one, especially a rival team. Durant was on a star studded Oklahoma City Thunder team with Russell Westbrook and James Harden. However, after losing in the NBA Finals and Western Conference Finals he decided to join the dynastic Golden State Warriors.

The Nets depth at the wing is worth noting and could be very underrated. They signed defensive minded Royce O’Neale. Although listed at 6’4, O’Neale can play the three or the four. In addition to his defense, O’Neale can be a decent scorer off the bench as he averaged a career high 7.4 points per game shooting 45.7% from the field.

The Nets also signed small forward TJ Warren who could be one of the biggest steals and most underrated moves in free agency. Warren has fallen under the radar as he has not played since 2020 and not a full season since 2019 due to healing from a stress fracture in his left foot.

What could make this signing a steal is how Warren performed in the 2020 Bubble. When NBA players were locked away from their families, Warren’s game was locked in as he averaged 26.6 points per game, 6.3 rebounds a game, and 2.4 assists.

If the Nets can get just a fraction of that from Warren watch out as this Nets team has more scoring depth than last season.

Projected to start at power forward is Ben Simmons. Simmons has missed the past two seasons due to battles with mental health and injuries, and he has not played for the Nets since being traded on 10 February.

Simmons is a great defensive player and even though he is listed at 6’11, he can play any position with his speed and ball handling abilities. There are, of course, a few knocks on his game, including his durability, attitude, and being an awful shooter. Simmons is a career 14.7% shooter from the charity stripe. Simmons is such a bad shooter that he considered switching his dominant shooting hand as he is ambidextrous. Also, Simmons has not played in a game in over two seasons so who knows if he can be back to the same level he once was once he gets back into shape.

Playing the five position for the Nets this year is Nicholas Claxton. Claxton had career highs in points and rebounds per game this past season at 8.7 points per game and 5.6 rebounds per game. However, at just 215 pounds, Claxton was often bullied by larger big men as he even struggled to rebound the ball.

Claxton had a very interesting free agency as it was reported that the Nets were unlikely going to match any mid-level offers since he is a restricted free agent. However, two days later the Nets gave him a two-year, $20 million dollar contract which is equivalent to that mid-level offer.

At the backup center position, the Nets have Day’Ron Sharpe who makes up for Claxton’s lack of size. At 6’9 and 265 pounds, it would not be as easy backing down Sharpe as opposed to Claxton. In his rookie year, he averaged 6.2 points per game and 5.0 rebounds a game.

Sharpe had a great summer in summer league, and hopefully he can continue that success. In a summer league game against the Minnesota Timberwolves, Sharpe put up 20 points and 10 rebounds. His dominant summer league performance and a solid training camp, that might be enough for him to earn more minutes as the backup center.

Irving and Durant both requested trades this summer. Irving wants the extension he thought he was getting and Durant gave Nets owner Joe Tsai an ultimatum picking between him or General Manager Marks and rookie head coach Steve Nash.

Tsai has already backed his staff and has given them full support, however who knows what is going on in this drama show of Brooklyn. Nash might not be the best coach or most experienced, but he should not be fired or blamed for their season. In the regular season, Durant played in 55 games, James Harden played in 44, and Irving played in only 29 games. Also, Ben Simmons didn’t play at all for the Nets.

In addition to letting Celtics stars Jayson Tatum and Jaylen Brown go off, the Nets struggled to defend Grant Williams and Al Horford in the paint. If Irving and Durant remain with the Nets, they, in addition to Simmons, need to stay healthy and fix the chemistry issues between the players and staff. Or, if Durant and/or Irving is traded, the new acquisitions need to come in and thrive in order to compete for a championship.