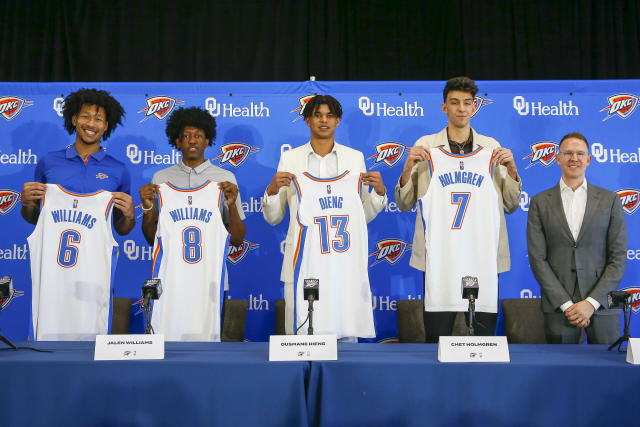 The Oklahoma City Thunder had one of the most promising young squads in the NBA last year with the eye-opening rookie year of Josh Giddey, recently extended Lu Dort and the steady blossoming of fourth-year guard Shai Gilgeous-Alexander. The Thunder only bolstered their young core by drafting the highly recruited Chet Holmgren second overall & continued adding with their selections of Ousmane Dieng, Jalen Williams and Jaylin Williams. The Thunder are likely to be lottery bound again next year but that seems to all be a part of GM Sam Presti’s ingenious plan to build another title contender from the ground up with his bottomless war chest of future draft picks.

The Thunder will most likely continue to run a hybrid offense without a true traditional PG with Shai Gilgeous-Alexander & Josh Giddey splitting time as the play initiators. SGA has bounced between the PG & SG positions since he was drafted and tends to lean more towards the two in terms of his scoring tendencies. Giddey had a breakout rookie season and showed flashes of brilliance as a distributor but will need to work on his perimeter shooting in order to be able to properly space the floor and maximize his passing abilities.

Tre Mann will also see minutes at PG fitting closer to the traditional size and prototype of a PG. Mann has higher upside as a shooter than Giddey at the moment but there is still room for improvement with a paltry 1.5 APG while averaging 22.8 MPG. That will have to improve this year if Mann plans to take on more minutes in this spot.

The shooting guard room will be a bit more crowded than at the one due to the incoming rookies from this year’s draft. Josh Giddey is technically slated as a SG but will play quite a bit of PG throughout the season. Lu Dort, who freshly inked a five-year $87.50M contract extension, will occupy some minutes at this position but more predominantly at SF in small ball lineups. The Canadian export took a step forward in his scoring output last season with a solid 17.2 PPG but will need to improve upon his 33% from outside if he wants to play meaningful minutes. You will see Jalen Williams, the twelfth overall pick this year, receive some minutes at the three as well.

Lu Dort will likely be playing more as an undersized three in small ball lineups and may concede minutes to Kenrich Williams as well as the NBL rookie Ousmane Dieng. Kenny Hustle is likely to take more minutes from Dieng at the start of the season as the New Zealand native gets acquainted with the pace of play and physicality of the NBA. It wouldn’t be shocking to see Dieng accrue more minutes toward the end of the year though when the Thunder are confirmed to be out of playoff contention and want to let the young guys run.

The power forward position will likely be run by committee with no clear front runner for the position. Veteran Derrick Favors in all likelihood will be dealt at some point to open up roster spots for players that fit the Thunder’s rebuilding timeline. Jeremiah Robinson-Earl, Darius Bazley & Aleksej Pokusevski could all see minutes here to start the season depending on the type of lineups OKC plans to run.

There isn’t a great deal to be excited about here unless there are plans to have Chet Holmgren play at the four due to his size. Pokusevski needs to progress forward this year after stagnating in 2021 at similar splits and minutes from the previous season with significant time spent in the G-League. The hope is that he will continue to adjust & adapt to the American game and start to live up to his potential for his size, speed and play initiating ability.

All eyes will be on Chet Holmgren in his rookie campaign to see how his frame will hold up against the rigors and physicality of the NBA. The hope will be that the former Bulldog will be able to begin packing on more muscle with the assistance of professional facilities and nutrition programs at his disposal but there should be no question about his determination & grit despite his size.

Chet should be able to counteract his lack of strength with his defensive instincts and length, standing at 7’1” with a 7’6” wingspan. Holmgren will likely be given the bulk share of minutes here to develop but his rookie contemporary Jaylin Williams will also see time here and Mike Muscala can serve in more of a mentorship role as the longest tenured player on the roster.

There aren’t really many questions regarding the Thunder’s roster this year outside of Chet Holmgren’s development. The lottery pick is integral to Sam Presti’s plans going forward and the expectations for his performance will be high entering the season. The rest of the team won’t be under the same kind of pressure to succeed as Holmgren but the level of competitiveness and tenacity he possesses will push his teammates to expect more of themselves.

That being said, OKC is the youngest team in the NBA with an average age of 23.1 and Presti has been rather transparent about their plans as an organization. This team needs time to develop & progress as a unit and will be relegated to the bottom of the Western Conference as they learn the necessary lessons of youth. The Thunder will be exciting to watch as a team with a handful of versatile “position-less” players that could continue to revolutionize the way basketball is played in the NBA.

The terrifying thought here though is the idea of another season spent working through kinks and hardships leading to the Thunder having a shot to draft Victor Wembanyama, one of the more fiercely anticipated draft prospects in the last decade. The future is looking up for OKC but don’t expect too much from them this year.