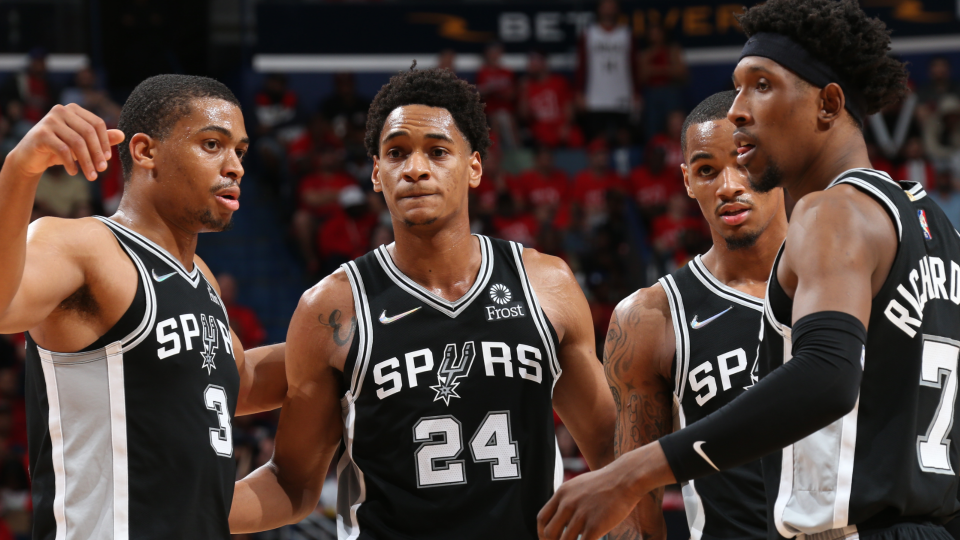 San Antonio is officially now in a full teardown of their roster, concluding another disappointing season which ended in a Play-In Tournament loss as the tenth seed falling to the New Orleans Pelicans. With the departures of Kawhi Leonard & DeMar DeRozan in recent years and All-Star Dejounte Murray’s trade this offseason, the Spurs are in the midst of a new beginning after failing to rekindle the success of the Tim Duncan-led championship teams of the 2000’s & 2010’s.

A rebirth may be on the horizon with the highly anticipated 2023 NBA Draft sweepstakes entering its infancy and the top prize being arguably the most hyped NBA prospect since LeBron James, the 7’3” French product Victor Wembanyama.

Dejounte Murray, now an Atlanta Hawk, averaged 9.2 assists per game as the Spurs’ primary initiator on offense. That ball handling production will be missed along with his prolific scoring ability and that most likely will not be replaced by anyone else on the depth chart.

Tre Jones will likely fill the role with Devin Vassell, Josh Richardson, Joshua Primo and rookie Blake Wesley all potentially competing for touches depending on head coach Gregg Popovich’s rotation throughout the season. Tre Jones averaged an efficient 5.1 assist to turnover ratio in 16.6 mpg last year and fits more of the traditional PG prototype with the rest of the roster’s guards fluctuating more as hybrids that can extend to the SG and SF positions.

Devin Vassell will take up the mantle as the starting SG for the Spurs next season and will split minutes with Joshua Primo & Josh Richardson. Devin Vassell showed some upside last year, averaging a low 0.8 turnovers per game & will have to shoulder more of the scoring load with Murray in Atlanta and Keldon Johnson becoming more of the focal point of the offense.

Malaki Branham, the Spurs 20th pick in the 2022 Draft, could also see some minutes here and at the SF position but that will be predicated upon Popovich’s belief in the former Buckeye.

Keldon Johnson recently signed a four-year $80.00M contract with the Spurs on a rookie scale extension to remain with the team. Keldon Johnson could flex up to PF in small ball lineups but naturally seems more equipped to play the three. Johnson will have more pressure placed on him with Dejounte Murray’s ATL departure to score at a higher clip than previous years and take on more of the offensive load for the Spurs. Doug McDermott will also receive minutes at the SF position as San Antonio’s resident sharpshooter.

Do not be surprised, however, if the Spurs attempt to move him for picks later in the season towards the trade deadline assuming any contenders come calling seeking a reliable floor spacer. McDermott’s contract is one of the highest remaining on the team and at 31 years of age he may not fit into the timeline of a potential Spurs rebuild. If that does come to fruition you could see rookies Malaki Branham & Jeremy Sochan see more minutes at this position.

Zach Collins will most likely be starting at PF to start the season and hopefully will be able to stay healthy, which has been an issue for him. Collins could be challenged by Baylor rookie Jeremy Sochan for minutes but that will hinge upon how rapidly the Big 12 Sixth Man of the Year develops especially as a shooter.

Sochan had the ability to cover the 1 through 5 defensively at the collegiate level and that will translate well in the NBA, but his scoring ability is raw and will need to improve. Sochan’s ball handling and play initiation was promising in his lone season at Baylor so hopefully with time he can round out his game more and become a valuable building block in this rebuild.

Jakob Poeltl will start at the five for the Spurs but could concede minutes to Zach Collins in small ball lineups. Poeltl ranked second on the team in PER last season behind Dejounte Murray as well as averaging 13.5 PPG on an efficient 61% from the field and grabbing a solid 9.3 RPG.

The Austrian native will be a solid and consistent presence in the front court for the Spurs going forward but certainly won’t dazzle anyone with his style of play. Gorgui Dieng is the only other true C on the roster besides Poeltl, returning on a one-year deal after spending last year in Atlanta.

There are several critical questions surrounding the San Antonio Spurs going into the 2022-2023 season. How long is Gregg Popovich willing to stick around to try to rebuild the Spurs into a champion again? Will he assist in the dirty work of the teardown and help pass on the finished product to Brett Williams?

Do the Spurs embrace a full tank this season to have a shot at drafting the generational talent in Victor Wembanyama? Questions remain about the future of the Spurs but with over $24.00M in available cap space this season, the Spurs can leverage that into taking on bad contracts and building a cache of draft picks to reconstruct themselves back into the perennial contenders  they once were.