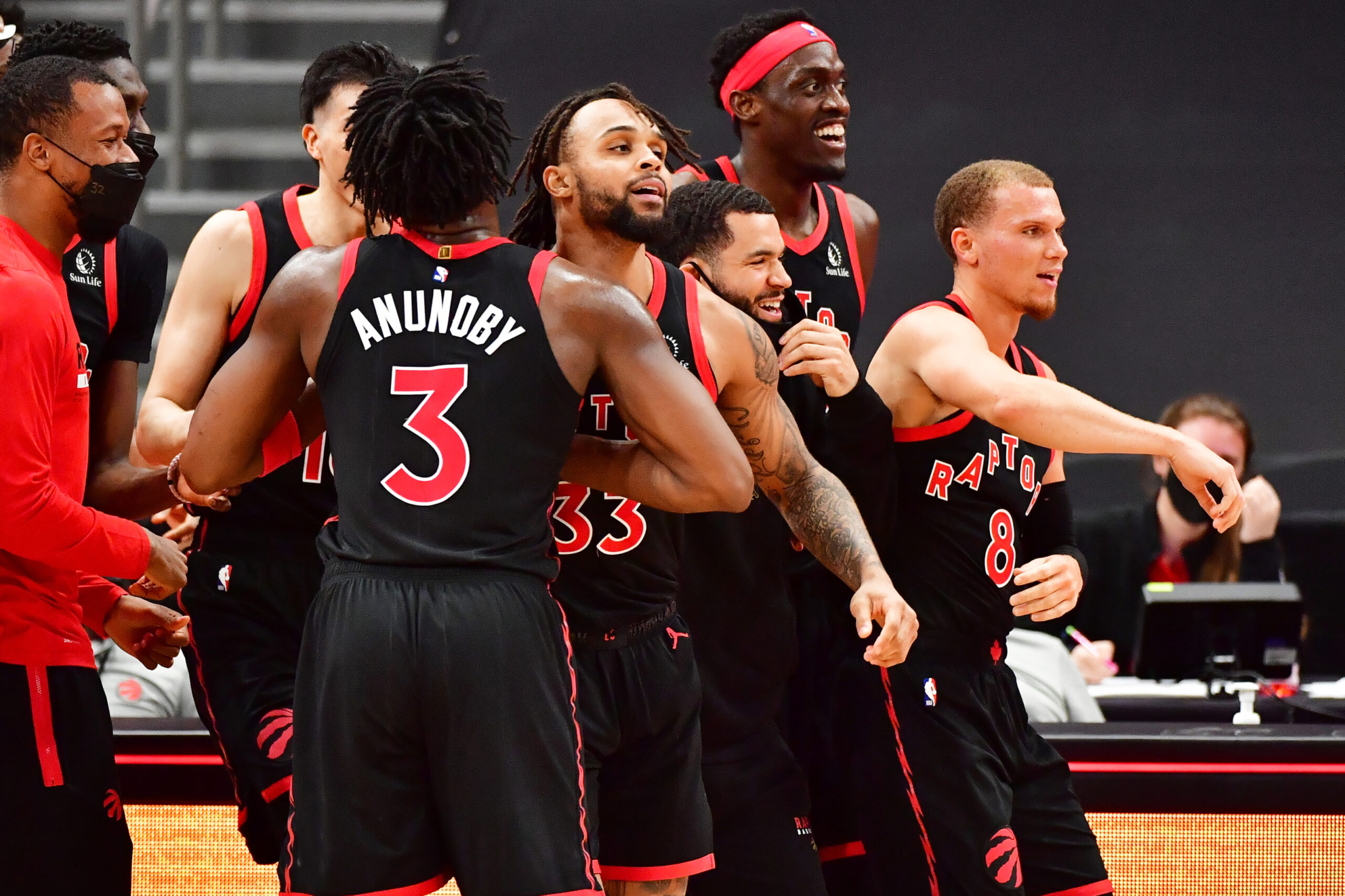 Rookie of the Year

Similarly to the Cleveland Cavaliers, the Toronto Raptors were not expected to make much noise in 2021-2022. In the end though, they found themselves in the playoffs with a 48-34 record. In fact, due to some collapses on the part of other teams, the Raptors wound up the fifth seed and gave the Philadelphia 76ers all they could handle in the first round. Coming off a displaced, injury-riddled season in 2020-2021 where they finished 12th in the East, it’s understandable that most thought last season was going to be middling at best. Most outlets had them as a fringe .500 team, maybe making the play-in if things went well. Instead, Nick Nurse proved he was one of the best coaches in the league and took a solid team of lengthy, athletic players to the playoffs. The Raptors had a few players step up and play unexpectedly well, and their rookie, Scottie Barnes, was far from the least. On his way to a Rookie of the Year win, Barnes proved much more polished on offense than anticipated, averaging 15.3 points per game on 49.2% shooting. While most of his points were scored on the run or attacking the basket, he also proved he could handle the rock, averaging 3.5 assists and he’s already deadly in transition. Defensively Barnes also looks the part, and he has an all-around game reminiscent of a younger Giannis Antetokounmpo or Ben Simmons. Those two guys are on very different trajectories now, and where Barnes goes will come down to whether he can develop a usable outside shot.

Fred VanVleet is entering seventh year in the NBA, and he’s improved every single one of them. That’s not an exaggeration either, as he has increased his points per game each year culiminating in 20.3 in 2021-2022. When VanVleet gets hot, he’s one of the best scorers in the game, although that is counteracted by him going ice-cold every once in a while as well. VanVleet marries great range and elite shooting with being a better defender than someone his size has any right to be, with some of the most active and pesky hands in the league. Offensive consistency will be the key for VanVleet going into next season. Perhaps playing more off-ball will help him there. Gary Trent Jr. adds more scoring, especially outside shooting, that the Raptors lineup desperately needs. That being said, there is something of a roster crunch here, and with him on a contract year he could be dangled as trade bait. Playing their five best players leaves an awkward fit at places, and the projected starting five for 2022-2023 was not even a plus lineup last year. Still, Trent is coming off a career year, scoring 18.3 per game, importantly with 38.3% shooting from deep, tops on the team. Without him and VanVleet, the spacing takes a dive, so Trent has a crucial place on this lineup. As expected of any player on a Nick Nurse team, Trent also improved defensively, enough not to be a detriment there, and with his size and wingspan he can continue getting better.

Speaking of breakout players, OG Anunoby also had a bit of a stepping out in 2021-2022. He averaged a career high 17.1 points per game, and did it in a number of ways. His ability to drive mixed with an acceptable three-point shot made him an offensive threat. Still just 24, Anunoby is another guy that seems to really be getting better every single year, and he’s also a plus defender. Noticing a trend here? Anunoby struggled with injuries last year, but played some of his best basketball in the playoffs, particularly in Games 1 and 2. Anunoby will be looking to take another step on offense next year to continue that development, and if he does that might be what the Raptors need to truly contend. 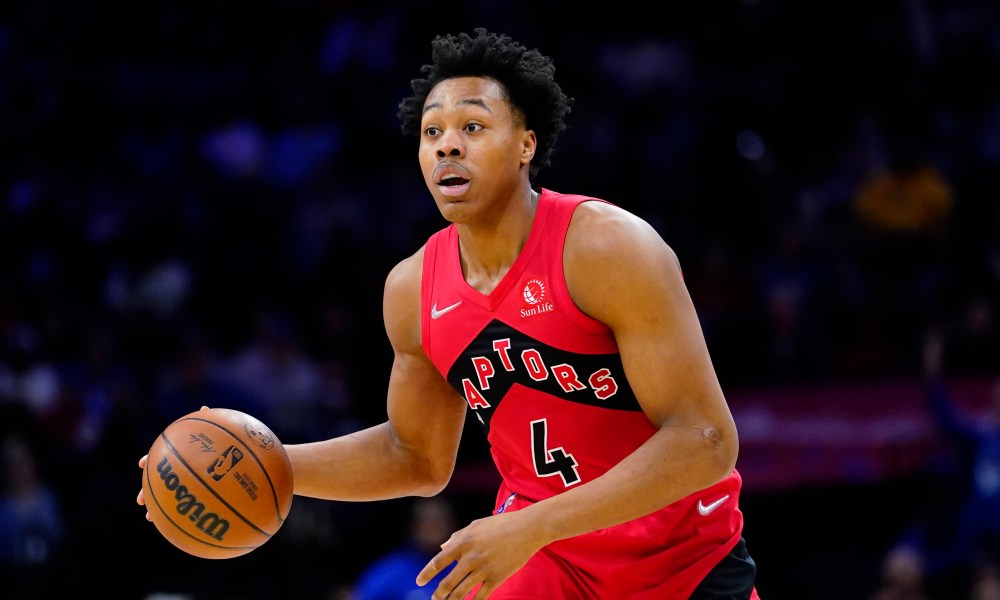 The next two positions are a bit odd for the Raptors, as they will likely trot out three guys that could all, and maybe should, be playing the four. The likely candidate here is Scottie Barnes, coming off a great rookie year. Barnes ability with the ball in his hands lets VanVleet play more off-ball where his three-point ability can really shine, and his athleticism is a dangerous on the break or cutting to the hoop. For all that he already can do though, it’s all about development for Barnes this year. Just like much of the rest of his team, Barnes was a capable offensive player, but needs to add additional dimensions to take the next step. Overall, that is the common issue with the Raptors. They have a ton of guys that can put the ball in the hoop, but none of them are really three-level scorers, none of them are going to go out and score a consistent 25 points either. Still Barnes has as much potential as anyone, with ball-handling skills that are atypical for a player of his size and wingspan. Precious Achiuwa could also get some run here, and he’s another young gun that has some real potential. This is also Pascal Siakam’s natural position, and if they do slide everyone up (whether for injury or roster moves), both Chris Boucher and Khem Birch might see starts at the five.

Pascal Siakam is arguably the best player on the team, so he’s got to be in here somewhere but this is far from a normal position for him. Standing just 6’9” he’s undersized for the position, although the 7’3” wingspan does help. Put simply, Siakam is a nice All-Star level player. He’s excellent bull-dozing through the lane and a great finisher, scoring 22.8 points per game on 49.4% shooting. Couple that with great defense, and Siakam seems like someone you could really build around. Unfortunately, while the short to mid-range shooting has improved, the three-ball hasn’t. It’s not impossible for him to improve there, but 28 isn’t young anymore, and it’s more likely that Siakam is what he is. An All-Star, but not a superstar. Therein lies the crux of the Raptors issues, and it’s familiar territory for them.

Go back just five or so years ago to the Dwayne Casey Raptors. Led by Kyle Lowry and DeMar DeRozan, Toronto was a permanent playoff fixture, often entering with a top four seed after winning the division. Unfortunately, early and disappointing playoff exits were what they became known for, and it was really their lack of a true superstar to carry them through that kept doing them in. DeRozan and Lowry were significantly less effective in the postseason, and the lack of a closer that could get them consistent buckets in the clutch kept seeing them ousted in often embarrassing fashion. Then they got the superstar they were missing in Kawhi Leonard and ended up winning it all. On the way, Leonard gave them possibly the biggest shot in their franchise history and he also almost single-handedly carried them through their middle series, scoring 34.7 points per game against the Philadelphia 76ers and 29.8 against the Milwaukee Bucks, both 10+ the next closest Raptor.

They find themselves in a similar situation now. They had five guys score over 15 points in the regular season in 2021, but their leader was Siakam at just 22.8. None of their players are multi-dimensional scorers either, having just one or maybe two offensive weapons, and even the things they are good at you’d be hard pressed to say they are THE best at any of them. They can all shrink in the toughest moments, and they don’t have one guy that you would absolutely trust to take over. Contrast that with the Miami Heat having Jimmy Butler, the Bucks and Giannis, the Golden State Warriors and Stephen Curry, the Boston Celtics and Jayson Tatum. Nearly all the other playoff teams, and the ones with real championship aspirations especially, all have A Guy. The Raptors don’t. They need one, whether by trade or by development. Luckily, they do have quite a few guys on the roster now that might take that next step. It probably won’t be their current All-Stars in VanVleet or Siakam, but they have a trio of young prospects that have a chance. Barnes, Anunoby and even Trent are under 25 and have improved every year. If just one of them can ascend to that next level and become a superstar scorer, this Raptors team will go from fringe playoff team to championship contenders. They are elite defensively; lengthy, athletic and switchable, and have a number of guys who can do some damage of offense as well. Now they just need a finisher.