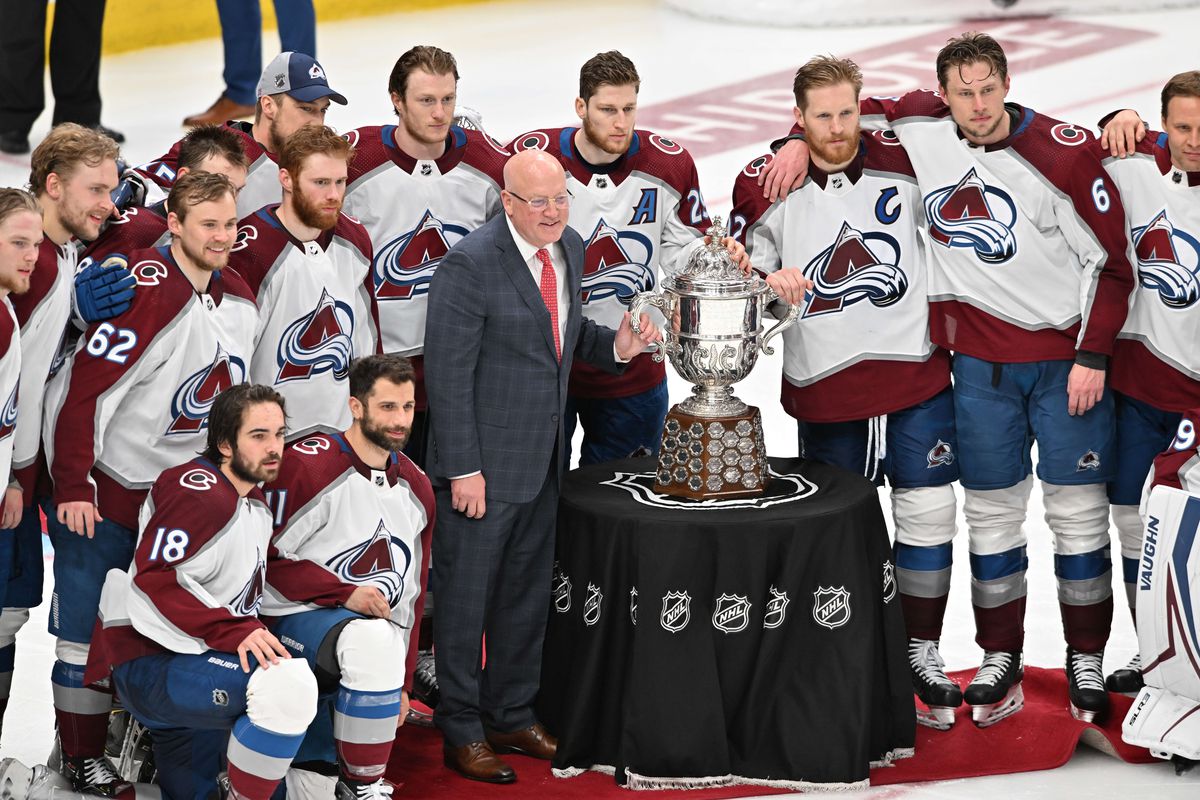 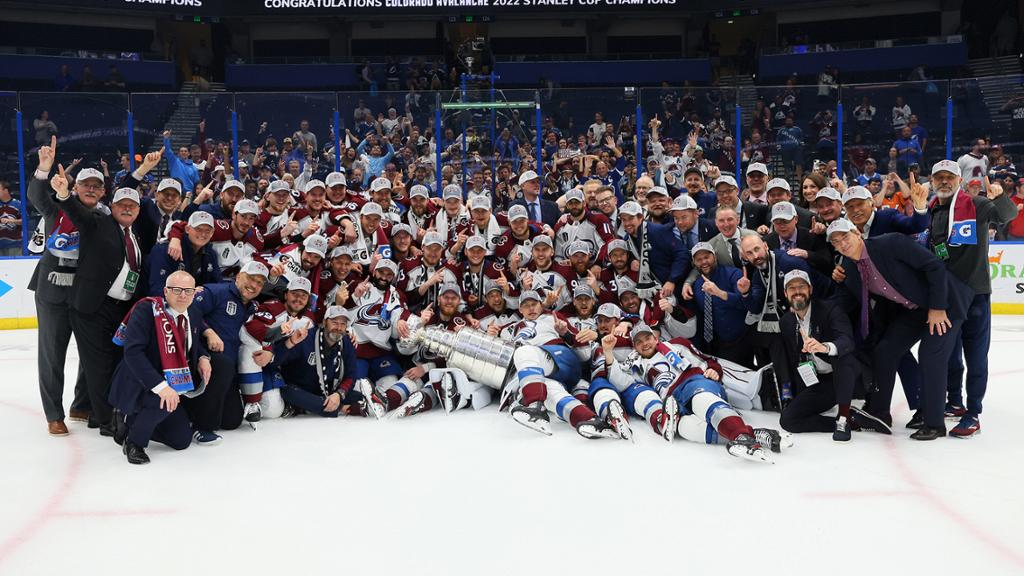 The defending Stanley Cup champions will be running it back with relatively the same core.

The Colorado Avalanche are coming off their first Stanley Cup victory since 2001.

The Avalanche have been a Western Conference powerhouse for the past three seasons and will continue that trend heading into the 2022-23 season.

Last season, Colorado finished with a record of 56-19-7 and 119 points. Colorado placed first in the Central and in the Western Conference. The team placed third in goals for (312) and 7th in goals against (234).

As of now, the Central Division, and the Western Conference will be theirs to lose.

This offseason has been one of celebration and jubilation for the Avalanche players. But for General Manager, Chris MacFarland, there have been numerous moves and acquisitions that had to be made.

Entering the offseason, Colorado had a lot of key players with expiring contracts but had a good amount of cap space to work with.

One of those free agents was goalie, Darcy Kuemper. Kuemper not returning to the team was all but confirmed when the Avalanche traded 2022 3rd and 5th round picks along with a 2023 3rd round pick to the Rangers for Alexandar Georgiev.

The first recipient of a big payday was Valeri Nichushkin. After one of the best comeback seasons in the NHL, Nichushkin was clutch in the playoffs as well.

Nichushkin scored a career-high 25 goals and 52 points in 62 games played. As well as a 15-point campaign in the playoffs.

His career year earned him an 8-year contract with a $6.125 million AAV.

Next would be Artturi Lehkonen. Another key contributor to the cup run, the former Canadien signed to a 5-year contract with an AAV of $4.5 million.

MacFarland did a great job bringing back these players, but couldn’t resign Andre Burakovsky or Nazem Kadri.

Both players elected to move further west with Burakovsky signing in Seattle and Kadri signing in Calgary.

Losing both of those players hurts, especially Kadri, but with the main core remaining intact, the Aves remain Stanley Cup favorites for 2022-23.

You can’t talk about the Avalanche without going into one of the most dominant lines in the NHL.

Nathan MacKinnon, Gabe Landeskog, and Mikko Rantanen have been as productive as they are skilled and unrelenting for years now.

MacKinnon is a top 5 player in the league and one of the best skates the NHL has seen.

Last season MacKinnon scored 88 points in just 65 games played. MacKinnon has scored over a point-per-game every season since 2017-18 and has shown no signs of slowing down anytime soon.

Mikko Rantanen lead the team in goals last season with 36 and points with 92. A 40, maybe even 50-goal season is only a matter of time for Rantanen at this point.

Landeskog adds leadership and physicality to the line while still contributing offensively. The team’s captain recorded 59 points in 51 games played.

This line will continue to dominate the league during the 2022-23 season, and I have zero doubts about that.

Like the past few seasons, the Avalanche won’t only rely on the first line to put up points.

The depth may not be as impressive as last season, but newly signed Lehkonen and Nichushkin should provide more scoring on the second line.

J.T. Compher will fill the role of 2C but I think 21-year-old Alex Newhook could make big strides towards filling that role throughout this next season.

Overall, Colorado still poses one of the most dangerous offenses in the league. With MacKinnon playing in a contract year, he may break the 100-point mark for the first time in his career.

On the blueline, the Avalanche have a guy named Cale Makar.

I could end this section right there. That’s how great he is and how much better he’s going to be.

In just three seasons in the NHL, Makar has a Stanley Cup, Conn Smythe (playoff MVP), Norris trophy(Best defenseman), and a Calder trophy (Rookie of the year).

To earn all those accomplishments so early in a career shows that Makar’s talent is generational. The cherry on top is his steal of a contract. Makar is making an AAV of $9 million for 5 more years.

The best part for Colorado is the fact that Makar isn’t the only game changer on the blue line.

Makar’s partner, Devon Toews, was one of the most underrated defensemen in the league. It wasn’t until this past season that Toews’ ability to shut down anything the other team throws his way were properly discussed.

Sam Girard and Josh Manson add even more skill and depth. Those four already give Colorado a stellar defense.

Byram has dealt with concussion issues throughout his career, but his performance during the 2022 playoffs showed his ability to enter the offensive zone and create scoring chances all on his own.

If Byram can stay healthy, he’ll receive much more ice this season and will prosper with the extra minutes.

Even if the forward group took some hits this offseason, the d-core will provide even more offensive output while still doing the right things defensively.

The Avalanche will go with the goalie tandem of Alex Georgiev and Pavel Francouz.

Both goalies have spent most of their careers in a backup role however, both look ready to move up to a starting role.

I imagine the Aves will go split the starts evenly until a bonafide starter emerges.

Francouz seems to have a slite edge at the moment with his performance during the playoffs. He wasn’t out of this world good, but he was solid when the team needed him.

Georgiev, however, is coming off a bit of a down year for him.

Georgiev will be playing to prove himself as a starting caliber goalie which could contribute to a possible bounce-back year for him.

With two solid options in net, I don’t see goaltending being an issue for Colorado.

As I said earlier, the Central Division and Western Conference are Colorado’s to lose.

It’s easy to just pick the defending champs as the cup favorites but I do think Colorado has a good shot at heading right back to the finals. This team still has the means to make the playoffs and go on another deep run.

Their core continues to produce and they even have some young players looking to take some strides in their own game. This team is already dangerous, but if players like Byram and Newhook continue to develop, Colorado will only continue to dominate.

They’re fast, skilled, experienced, and can play physically when they need to. They’ve gotten over the hump and will no doubt be looking for more.