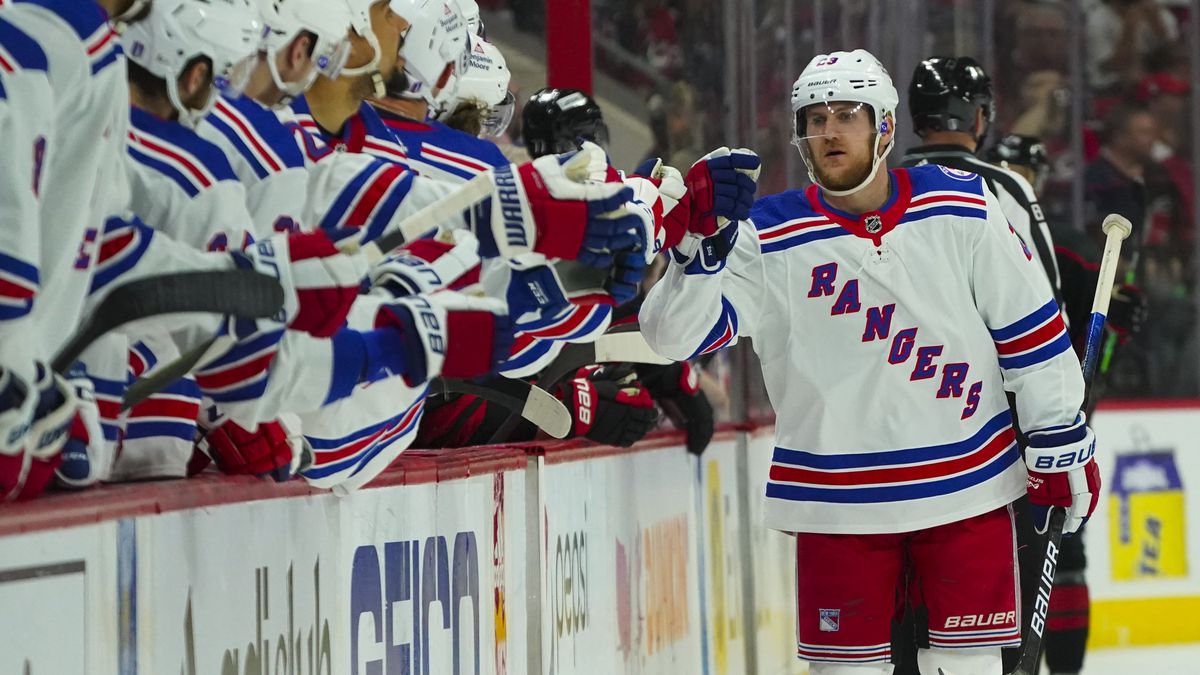 In their first playoff appearance since 2017, the Rangers are looking to remain a playoff contending team.

The Rangers finished the 2021-22 season with a 52-24-6 record, and 110 points, enough to finish second in the Metropolitan Division. The Rangers held a 2-0 series lead over the Tampa Bay Lightning in the Eastern Conference Finals, but couldn’t contain their lead long enough, and lost 3-1 in game 5. Despite giving up a series lead, the season was an overall success for the Rangers.

The team finished the regular season 7th in the league in overall stats and goaltender Igor Shesterkin took home the Vezina trophy, while Chris Kreider was top 3 in the league in goals scored this season with 52 goals and 25 assists.

From the Carolina Hurricanes, Vincent Trochek will provide the Rangers with much needed center depth for 7 years at $5.625M AAV. Trocheck has been with the Canes for 2 years and put up good numbers with them, scoring an average of 28 goals and 47 assists over his time with them. He’s not a fantastic goal-scorer but he is a great assister and can clearly back up the major Rangers goal-scorers like Chris Kreider, Mika Zibanejad, and Artemi Panarin. Trocheck will be extremely useful to the Rangers and it is a very exciting prospect to have a center depth player like him for 7 years.

From the Calgary Flames, the Rangers got Ryan Carpenter for 1 year and $750K. Putting up only 26 goals and 45 assists in his career so far, Carpenter doesn’t have much to his name, but that doesn’t mean the Rangers isn’t a good stepping stone for the center. The forward played for Worcester in 2014-15 and almost all of 2015-16 with San Jose of the AHL and made his NHL debut for the Sharks against the Minnesota Wild on Dec. 12, 2015. Carpenter got an 11-game recall in 2016-17 and scored his first NHL goal against the Los Angeles Kings on Nov. 30, 2016. He could be a power forward and provide some added center depth if needed, but I don’t expect to see him in the top lines.

As well as this, the Rangers also made fantastic draft picks with Adam Sykora who played in 46 games with HK Nitra of the Slovakia league in 2021-22, recording 10 goals and seven assists for 17 points. He also played for Slovakia at the World Championships this past spring. And Bryce McConnell-Barker who recorded 49 points (23G-26A) in 68 games with the Soo Greyhounds of the OHL. His point total ranked fifth on the club.

While Chris Kreider will continue to shine and propel himself up the goal scoring ranks, little attention is placed on his linemate, Mika Zibanejad. Since Zibanejad joined the Rangers, he ranks first on the team in assists (199) and points (364), and second in goals (165). Zibanejad is one of six skaters in the NHL with 165+ goals, 360+ points and 65+ power play goals since 2016-17.

The Rangers defense needs more work this year, yet with a hopefully better performance from Adam Fox and Jacob Trouba, the Rangers defense should propel the team further and not let all the weight fall on the goaltender’s shoulders. And with the new captaincy of defenseman Jacob Trouba, there is high hopes that the defensive quality will improve with stronger leadership.

A trade of backup goaltender Alexander Georgiev to Colorado prompted the Rangers organization to look for goaltenders to backup Vezina winner Igor Shesterkin. And goaltenders they found.

From the Winnipeg Jets, the Rangers drafted Jaroslav Halak for a 1 year contract for $1.55M. This is a great deal with Halak as the Rangers need a backup who is stable and seasoned, which Halak is. Boasting a .916 overall save percentage, Halak is clearly skilled enough to join Shesterkin’s goalie tandem and provide much needed depth in the Rangers goalie lineup. And with a .919 playoff save percentage, having Halak on backup during the playoffs would prove useful to the Rangers if we can clinch a spot once again.

From the Pittsburgh Penguins, the Rangers contracted Louis Domingue to 2 years and $775K AAV. The goaltender, often nicknamed “Chef Domingue” after an interview with a reporter in the 2022 playoffs when the French Canadian boasted that he cooks his own pre and during-game meals, is a bit less in caliber and skill than Halak but provides much needed comfort and safety within the crease. Domingue has a current .905 save percentage but set a record during his time with the Coyotes for wins by a rookie goalie and was named NHL Rookie of the Month in January 2016, going 6-3-2 with a 2.20 GAA and .925 save percentage. Thus demonstrating that Domingue is a great backup goalie, proved by his performance in the playoffs this season. Filling up the Rangers’ backup goalie necessity.

The Rangers will stay near the top of the Metropolitan Division, with a strong likelihood of clinching the playoffs yet again if the team remains healthy.

The offseason moves combined with a newfound confidence coming out of the playoffs, the Rangers should remain one of the best teams in the league moving forward.