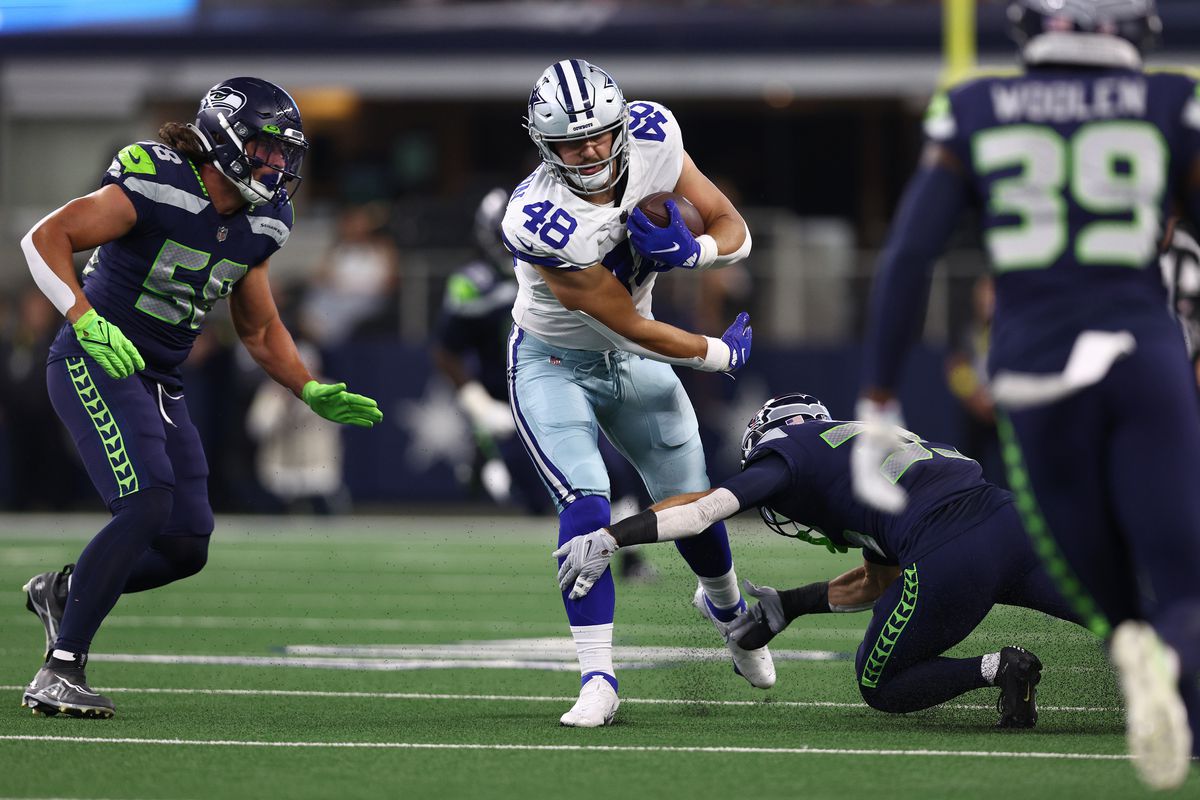 The Cowboys landed the third seed in the NFC playoff picture last season after an exceptional year. However, their winning ways did not translate into the playoffs. They lost in heartbreaking fashion to the sixth-seeded San Francisco 49ers. A game that will be remembered by OC Kellen Moore calling for a QB draw as the game clock ticked down to zero.

Dallas fans are used to their favorite team coming up short, time and time again. But as another season rolls around the optimism rises like clockwork. The Cowboys lost quite a few key pieces to their roster but added some talent also. In the weaker NFC, the Cowboys need to capitalize and flip their past fortune come playoff time.

One strong ability the Cowboys organization has, year in and year out, is their intelligence in the draft room. With the 24th overall pick in the NFL Draft, the Cowboys selected OL Tyler Smith from the University of Tulsa. Picking a lineman in the draft is never flashy and won’t excite many fans but Dallas addressed a huge need. While Tyron Smith is getting older and has been off the field often, Tyler Smith will look to fill the left tackle role once Tyron calls it a career. Smith will likely start at left guard this season and is already a phenomenal run blocker.

Another addition to the Cowboys is former Minnesota Vikings LB Anthony Barr. He has earned Pro Bowl honors four times throughout the 2015-2018 seasons. Barr’s veteran experience could help teach the relatively young linebacker room that contains Micah Parsons, Leighton Vander Esch, and Jabril Cox. Barr will make an immediate impact at the second level on the defense.

Lastly, the Cowboys added WR KaVontae Turpin, former USFL MVP. Turpin showed his speed and playmaking ability this preseason when he returned a kickoff and punt for touchdowns in the same game. He will specialize in the return game on special teams but will also be used as a versatile gadget in the offense.

The Cowboys lost some big contributors this off-season. It will certainly impact this team but how will they be able to replace their production? That is something only time will tell.

On March 11, the Cowboys traded WR Amari Cooper to the Cleveland Browns for two late-round picks. Cooper was traded due to his hefty contract of 5-year $100 million. In Cooper’s time with Dallas, he recorded 329 receptions, 3,168 yards, and 21 touchdowns. Ceedee Lamb is set to be the new number-one receiver in Dallas.

On March 12, OT La’el Collins was released. Collins had spent his entire six-year career in Dallas. The right tackle position will be taken over by OT Terence Steele. Steele had success when on the field last season, there should not be a drop-off in production at the right tackle position. Nonetheless, losing a veteran lineman does hurt Dallas’ depth on the line.

Probably the biggest departure this offseason is DE Randy Gregory. In 12 games played last season, he recorded 6 sacks, 3 forced fumbles, and 17 QB hits. Gregory was ready to re-sign with the Cowboys but backed out after certain language in the contract made him second-guess it. Unfortunately, Gregory sought out other options and signed a five-year deal with the Denver Broncos. Not having his production at the defensive end position will be noticeable all season.

Expect QB Dak Prescott to put up MVP numbers this season. The leader of the Cowboys got paid this offseason, is happy with the organization, and his body feels better than it has in some time. Prescott is going to be out to prove he is worth his contract. The offense led by Dak was the highest-scoring offense in the NFL last season.

Another player to keep an eye on is RB Tony Pollard. Even though Pollard will split carries with Ezekiel Elliott, Pollard will have his opportunities this season. He recorded 169 touches, 1,056 yards, and 2 touchdowns last season. OC Kellen Moore plans to utilize Pollard’s speed and playmaking ability more in 2022.

Lastly, the reigning Defensive Rookie of the Year, LB Micah Parsons, is only going to get better this season. Parsons moved all around the defense last year, using him in every way possible. The 2021 DROY recorded 84 tackles, 3 forced fumbles, 13 sacks, and 30 QB hits last season. Parsons was all over the field last season and look for more of the same this year.

Once again, in week one the Cowboys will face the Buccaneers. Right off the bat is a real test for both teams. Last year the Bucs won 31-29 on a last-second field goal to sneak by the Cowboys. Anytime you play Tom Brady it will be a battle until the clock strikes zeros across the board. It will certainly be another close game this season as both teams are playoff contenders.

Week five vs the reigning Super Bowl Champions will be another great test for Dallas. These are the kind of games the Cowboys need to win so that other teams take them seriously. The Rams improved their roster this offseason by adding LB Bobby Wagner, longtime Seattle Seahawk, and WR Allen Robinson. They’re not a team to look at lightly.

The Cowboys have the talent to win the NFC East in back-to-back seasons, something that hasn’t been done since the 2003-04 seasons by the Philadelphia Eagles. Fans have been waiting, for what seems forever, for the Cowboys to make a jump and make a deep playoff run. As long as the defense can put up similar numbers as last season and Prescott has an MVP-type season, anything is possible, especially in the NFL.