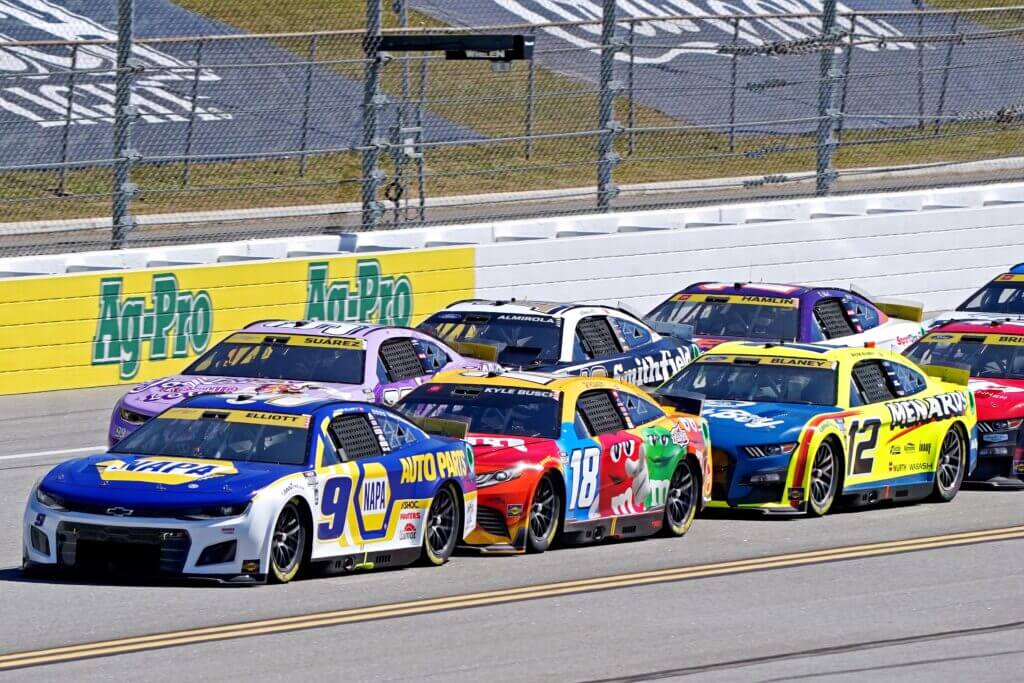 While NASCAR’s season won’t fully begin for another 3 weeks it’s never too early to start talking about playoffs, right? Either way, today I’ll be giving my predictions for this season’s playoff field. Some drivers are pretty much locked in barring a disastrous season while others are trying to figure out their best chance to make the postseason. With all that said, let’s get into the picks.

Like previously mentioned, some of these guys are in my opinion locks for the playoffs this year. The odds they don’t make the playoffs are very slim. The drivers in that group are Kyle Larson, Chase Elliott, Joey Logano, Denny Hamlin, Ryan Blaney, William Byron, and Ross Chastain.

As for Harvick, many have already predicted he wouldn’t make the playoffs but that was before he announced his retirement. I truly believe he will have a great final season and I think he’ll certainly see victory lane, maybe more than once.

For Kyle Busch, moving to a new team is tough and while many drivers have had success many drivers have also struggled at first as well. I think Kyle will make the playoffs with at least one win, but I don’t believe this season will be like the last time Busch switched to a new team where he notched 8 wins. He’ll struggle early on but will come on strong during the summer stretch.

As for Tyler Reddick, he’ll also be moving to a new team as he completes his move to 23XI Racing a year earlier than originally anticipated. I think he’ll have a great first season with the team and most notably, Reddick will win one of the four crown jewel events this season.

Reddick’s teammate, Bubba Wallace will make the playoffs this year as well. Bubba got his second career win at Kansas after just barely missing the playoffs. His team looked really sharp during the playoffs despite not being included and I believe that success will carry into 2023.

Alex Bowman is a driver I really wasn’t too sure on as he hasn’t been quite as successful as some of his other teammates. However, Bowman tends to accelerate when the cards are stacked against him. It’s not talked about but Alex Bowman is one of the most clutch drivers in the series. I think he’ll have a chance to prove that once again this season and when he does he’ll lock himself into the postseason.

This is probably my boldest pick of the bunch, but I stand by it strongly. Haley improved immensely throughout the 2022 season and he’s racing for a great organization in Kaulig Racing. His improvement last year was no joke and I expect him to win a superspeedway race or even lock himself in on points. Haley’s teammate, AJ Allmendinger could also very likely make it in instead of Haley, but I fully believe Kaulig Racing will field one playoff driver.

The driver of the famous number three car has made the playoffs five times in his career and this season he will make another. Dillon has been solid at RCR but he’s been their most experienced guy for quite a while. With the addition of Kyle Busch at RCR, Dillon will have a great mentor to help lead him and the team through the season. That mentorship is going to pay off at some point and Dillon will be in the playoffs once again.

The only rookie I have making the playoffs this season is the always entertaining Noah Gragson. Gragson moves to what’s now known as Legacy Motor Club and similar to Dillon, Gragson will have a great mentor. The organization added 7-time champion Jimmie Johnson to the owners list and with his addition this team will be strong. Gragson is aggressive and will do what it takes to win. He’ll probably have 3-4 races with a shot to win in the end and I expect him to display his talents in at least one of those to lock himself into the playoffs.

The last guy I have making the playoffs in 2023 is Martin Truex Jr. The 2017 champion missed the postseason last season but he’ll bounce back accordingly this season. Truex had quite a few chances to win last year and just couldn’t get it done. I think he’ll get at least one win before the playoffs arrive, locking him in with a shot at a second title.

Those who didn’t make it

Did you agree with my list? If you didn’t, allow me to explain some of the drivers and teams who I don’t have making the postseason.

If you have noticed, I believe only one SHR car is going to make the playoffs this season. Almirola was on his way out of the series last year before signing an extension and has been declining over the last few seasons. Ryan Preece, the newest driver in the stable, is joining a 41 team that has only won a single race since Kurt Busch’s departure. Lastly, Chase Briscoe struggled last season despite making the playoffs and the round of eight. He just wasn’t consistent enough and I expect more of the same.

This one may be a shocker considering Bell’s championship four appearance last season. However, I believe Toyota is going to take a step back this season and I think that will be most notable in the 20 team. I think Bell could get a win but similar to Kyle Busch’s 2020 season, it may not come until very late in the season.

Suarez is the guy I didn’t put on the list that I think is most likely to prove me wrong. He was strong last year and has steadily improved throughout his time at Trackhouse racing, but I feel they may decline slightly and possibly miss the playoffs with the amount of talent in the series right now. Like I said though, Suarez could easily prove me wrong.

The 2023 season is sure to be an exciting one and if my picks end up being accurate, we will be in for a crazy year.