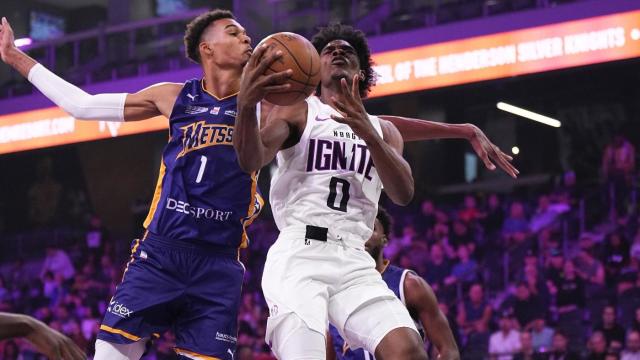 This week NBA scouts as well as NBA fans watching from home will get an early look at the top of the 2023 NBA Draft in a matchup between NBA G-League Ignite and Metropolitans 92 of the LNB Pro A French League. The games will feature the projected top two picks in June’s draft, Victor Wembanyama (Metropolitans 92) and Scoot Henderson (NBA G-League Ignite).

Wembanyama, the projected number one pick, possesses a lanky 7’4” 210 pound frame with an eight-foot wingspan at 18 years old. Along with his measurables, he also demonstrates the skills of a guard with his ability to shoot, handle the ball, and run the floor with fluidity. On the other side of the ball, Wembanyama is able to use his length to stay with smaller players even when it seems like he’s out of the play and block their shots without jumping.

Wembanyama has drawn comparisons to other international players such as Giannis Antetokounmpo, Kristaps Porzingis, and Rudy Gobert. But Wembanyama is one of the more unique prospects in NBA history and doesn’t believe his game is comparable to one specific player.

“I don’t think any comparison is accurate because my goal is really to be one of a kind and I know I’m going to be,” Wembanyama said.

With being a top overall pick comes high expectations and Wembanyama expects no different.

“I expect to be great, not less,” Wembanyama said.

Wembanyama thinks highly of fellow prospect Scoot Henderson while also maintaining that he’s the best prospect in next year’s draft.

“He’s really a great player. If I was never born, I think he would deserve the first spot,” Wembanyama said.

Similar to his counterpart, Henderson already has professional experience as an aspiring NBA player. At the age of 17, Henderson averaged 14 points, 5.0 rebounds, and 3.6 assists per game last with NBA G-League Ignite.

Henderson believes his experience with G-League Ignite will work in his favor when it’s time for general managers to make their selections in June.

“I think what separates me from the rest of the players in my draft class is I just played an entire season in the G-League,” Henderson said. “I’m basically a pro. I’ve been around pro settings and pro development and that’s really helped prepare me for next year.”

Although Henderson has the attention of NBA scouts he looks at this upcoming season with NBA G-League Ignite as his coming out party.

“This year is going to be my breakout year to where I’m going to be able to separate myself from my competition and my peers,” Henderson said.

Henderson also acknowledged what Wembanyama brings to the table along with the potential depth of the rest of the 2023 NBA Draft class.

“Both of these kids are going to be special,” Spears said.

To catch an early glimpse of next year’s draft class, tune in to ESPN 2 and the NBA app on Tuesday October 4th at 10 PM ET and Thursday October 6th at 3 PM ET.