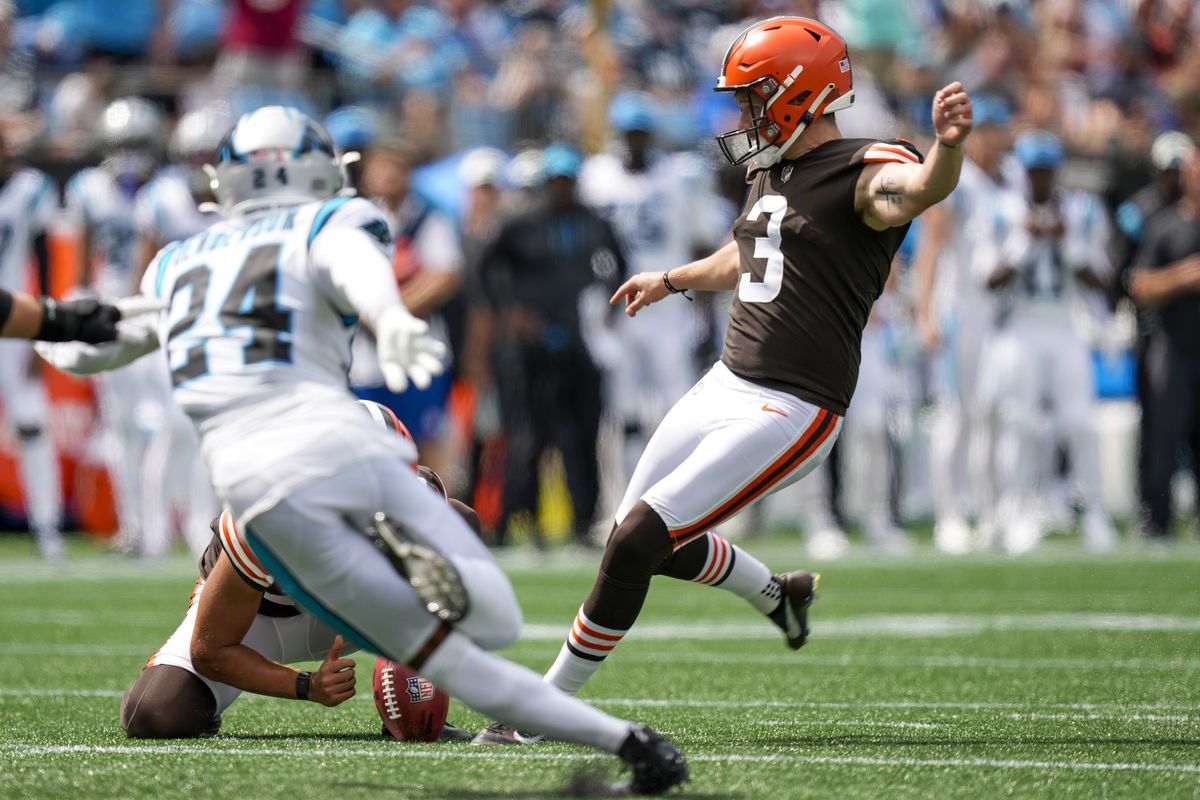 After a turbulent offseason, the Cleveland Browns roster was finally put to the test in Week 1 on the road against their former quarterback, Baker Mayfield and the Carolina Panthers. Browns fans got their first glimpse at what this offense will look like with Jacoby Brissett at the helm. In a game that came down to the final seconds, the Browns were able to pull off a 26-24 victory with a game winning field goal from their rookie kicker, Cade York. These are the key takeaways from the Cleveland Browns Week 1 performance, heading into their week 2 matchup against the New York Jets.

The passing offense in Week 1 was discouraging to say the least. The first half was littered with poor decisions and poor throws from Jacoby Brissett, as he nearly threw a couple interceptions while missing on a number of downfield opportunities. He was able to complete a few short passes to Donovan Peoples-Jones, but the big plays in the half came from Nick Chubb and Kareem Hunt. The Browns leaned on the rushing attack even more in the second half, as Nick Chubb found consistent success throughout the game. Brissett made a very small impact in the second half until the final drive of the game, where he was tasked with driving down the field in a little over a minute to win the game. After the Panthers committed a Roughing the Passer penalty that brought the Browns near midfield, Brissett made a couple of timely throws to Peoples-Jones and Amari Cooper that put them into field goal range.

Although Brissett cannot be expected to perfectly mesh in this offense after playing very little in the preseason, it was clear that his ability to make big plays is extremely limited. Nick Chubb averaged more yards per carry (6.4) than Brissett averaged per passing attempt (4.3). When Brissett was rarely tasked with making a downfield throw, he was unable to execute. Brissett will continue to build more chemistry with his receivers as the season goes on, but it is clear that this offense wants to rely on their running backs as much as possible through these first 11 weeks of the season.

NFL fans always seem to doubt when a kicker gets selected before the 7th round in the NFL draft, but it has continued to work in recent years. Matt Gay, Evan McPherson, Tyler Bass, and Daniel Carlson were all selected in the past four NFL drafts, and it can be argued that they are all currently top 10 kickers. Through one week of the NFL season, it is looking like Cade York could possibly be the best of the bunch. After nailing 70-yard field goals in warmups throughout the preseason, York proved that it wasn’t all hype in his Week 1 performance. He converted all four of his field goal attempts, including a 58-yard field goal for the win that easily cleared the uprights.

Having a kicker that you can trust to send out for a 60+ yard field goal attempt is a huge asset for a head coach, and it will be exciting to see Cade York reach his potential in a Browns uniform. Cleveland has desperately needed a consistent kicker in recent years, and it looks like Cade York will be the answer.

The Browns defense looked extremely strong in Week 1 through three quarters until they eventually collapsed in the fourth quarter. The Browns gave up 214 yards of offense on the Panthers final three drives of the game, including a 75 yard touchdown to Robbie Anderson. This has been a common occurrence for the Browns defense in recent years, with the defense blowing plenty of leads late in games. The defense is loaded with talent from the defensive line to the secondary, but they struggle to play consistent football from start to finish. Even on a game to game basis, the defense will look wildly different. Hopefully, with most of these players getting their second season together (Jadeveon Clowney, John Johnson III, Anthony Walker Jr., Jeremiah Owusu-Koramoah), this defense will find a way to play consistent football throughout the 2022 season. If they can do that, the talent on this defense can shine, and they will prove themselves as one of the top defenses in the NFL.

The Browns will look to sure up the passing offense and secondary prior to their Week 2 matchup with the New York Jets. The Jets have one of the worst rushing defenses in the NFL, so Nick Chubb and Kareem Hunt should have another strong showing. With Joe Flacco at quarterback, the New York Jets are a perfect matchup for the Browns defense to build some confidence early in the season.