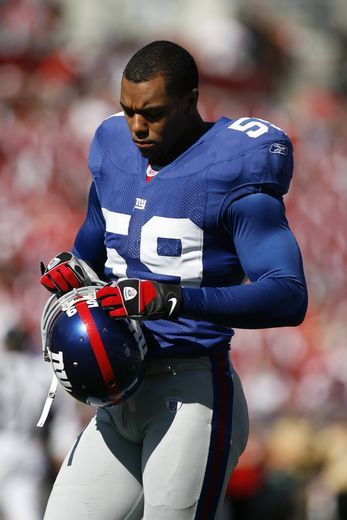 With all the scrutiny and changes the Giants defense has undergone within the past year, there is still one big question mark. That, of course, is the void left by Antonio Pierce at the middle linebacker position.

When the draft came this past April, the Giants waited until the fourth round to address this glaring need by drafting LB Phillip Dillard. This move made many believe that the Giants organization was hoping a leader would emerge from the linebackers already on the roster. However, another factor was added to the equation with the Giants’ recent acquisition of LB Keith Bulluck.

While Bulluck may have the veteran experience and leadership that Pierce demonstrated, he does not know the Giants defense nearly as well as other linebacker teammates. The advantages to Bulluck’s arrival may make him a shoe-in to start at MLB, but with his recent surgery and injury risk, don’t be surprised if you find another Giant stepping up to quarterback the defense at some point to quarterback the defense at some point this season

Among the players hoping to win the starting spot vacated by Pierce is Gerris Wilkinson.  Wilkinson is going into his fifth year in the NFL, all five of which have been with the Giants. Wilkinson may have been the Giant who was closest to having the starting spot, had it not been for several injuries. After going out with an injury, Wilkinson has yet to reclaim the starting gig he held for the first five games of the 2008 season.

There is plenty of competition between the Giants linebackers, including Bulluck, Dillard, Wilkinson and others, each bringing something different to the table. Wilkinson and Dillard have something in common, having been drafted in a middle round of the draft.

“Once I got drafted, I was the second to last pick of the third round. It was a big relief to be drafted on the first day and to go to a city like New York; you can’t ask to be in a better place. It was a great opportunity, I’m a little biased but I think it’s the best organization in the NFL.  In terms of how they run the organization and the types of players that they bring in, it’s a really high-class organization.” With Wilkinson showing this much respect and praise for the organization that drafted him, it’s easy to see where his heart lies.  Anytime a player speaks this highly of his organization, you know he will put forth nothing but 110 percent effort and dedication both on and off the field.

Wilkinson also has a high regard for a former mentor that has molded him into the NFL player he is today.

As Giants fans know all too well by now, last season under Bill Sheridan was a far cry from the glory days of Spags’ time, running the G-men’s defense. When asked where the major breakdown or difference was between Spags’ defense and Sheridan’s defense, Wilkinson seemed to pinpoint the problem very accurately.

“I think [Coach Spags] could better communicate with the players in terms of what they were thinking and doing and what he was trying to teach.  There was a way to meet somewhere in the middle and be on the same page. That wasn’t there much with Sheridan.”

However, that is no excuse for the inconsistent play the Giants defense exhibited last season. When asked to elaborate on how the defense played last season, Wilkinson laid the law down with how he expects himself and his teammates to perform.

“I think guys just need to come together and decide that there are going to be certain expectations every time we take the field and hold each other more accountable than we did last year. There were a lot of times, last year, when there was a lack of leadership from certain guys and a lack of accountability amongst the players. I think at time, we settled and didn’t hold ourselves to what we’ve come to expect and what people outside the organization have come to expect from the Giants defense. We need to hold each other to a higher standard.”

With the leadership qualities evident in Wilkinson’s determination to make the Giants defense better, there is another ray of hope for this upcoming season in the form of the team’s new defensive coordinator.

“I think that Coach [Perry] Fewell is more similar to Coach Spags than Sheridan because of his demeanor and communication. The defenses have some differences here and there, but overall I think Coach Fewell compares better to Coach Spags.”

With the first preseason game having yet to be played, many fans have worried whether the Giants defense would perform with another new defensive coordinator. If Wilkinson’s assessment of Fewell is any indication, then Giants fans should expect a return to energetic, tough, hard-hitting defense.

Whichever coach is on the sidelines, it is ultimately up to the play of the athletes on the field, and just like any other group of professionals, there needs to be a leader.  Again, the leadership qualities came through when asked who would fill the role left by Pierce.

“I see myself being able to fill that leadership void on defense. I’ve been with the organization, but you have to do it on the field first.  You have to be a leader in action before you can be a leader any other way. I think it will be very clear in the first three or four games who that leader is going to be, and who’s going to set that tone early for the defense.”  Wilkinson continued, “We have numerous options with guys along the D-line with [Justin] Tuck and Osi [Umenyiora], guys in the secondary with Corey [Webster] and Terrell [Thomas], and guys that have been very productive, but the leadership on the defense usually comes from the linebacking group. I personally see it as being me.”

Despite the display of confidence by Wilkinson in his ability to lead the Giants defense, he is still on the outside looking in. Fans can only wonder what the linebacker picture might look like had Wilkinson stayed healthy throughout his career. When asked how his injuries have affected his shot at being a starter, Wilkinson was confident in his response.

“If I could place one word on the way my career has been thus far, it would be ‘inconsistent’. Without the injuries, I feel I could be a frontrunner for that spot. I think that once the season gets going and I have a chance to stay healthy and on the field, I think that people will be surprised with my performance.”

Inconsistency is something Wilkinson wants to erase from his vocabulary, replaced by determination and dedication to be better.

“Every time I step on the field, I try to improve be better than I was last time. With the experience that I have, the things that I’ve learned, and the amount of work that I’m willing to put in, I will show it with my play.”

Wilkinson’s dedication is shown both on and off the football field. He is very involved in charities and foundation work.

“I am the Chairman of the Board with a non-profit organization based out of Atlanta, Georgia, called Youth Enhancement Services. The main focus of it is tutoring and mentoring high school dropouts. The dropout rate in the area is about six percent; it’s pretty much crisis-type numbers.” Wilkinson continued, “My fiancée runs [the organization]. She’s the executive director of it. Her mom started it 20 years ago and I became the Chairman of the Board in January.”

Wilkinson is also involved with charity work in the New York area.

“I lost my mom to cancer in 2005, so the Giants paired me up with this organization in the tri-state area called Cancer Care. They work with children and families where a parent has died from cancer and they have a camp that I participate in.”

While Wilkinson is currently not listed as a starter on the Giants depth chart, we can only speculate what the season will bring. We all know how wild and unpredictable the NFL is and Wilkinson can very well be a starting linebacker for the Giants at any given week of the season.

With his dedication to his team, on the field, and to those in need, off-the-field, Wilkinson is the definition of a true Giant.

AN INSIGHT TO DDP DIAMOND DALLAS PAGE
Beyond the Athlete: “HBK” Shawn Michaels