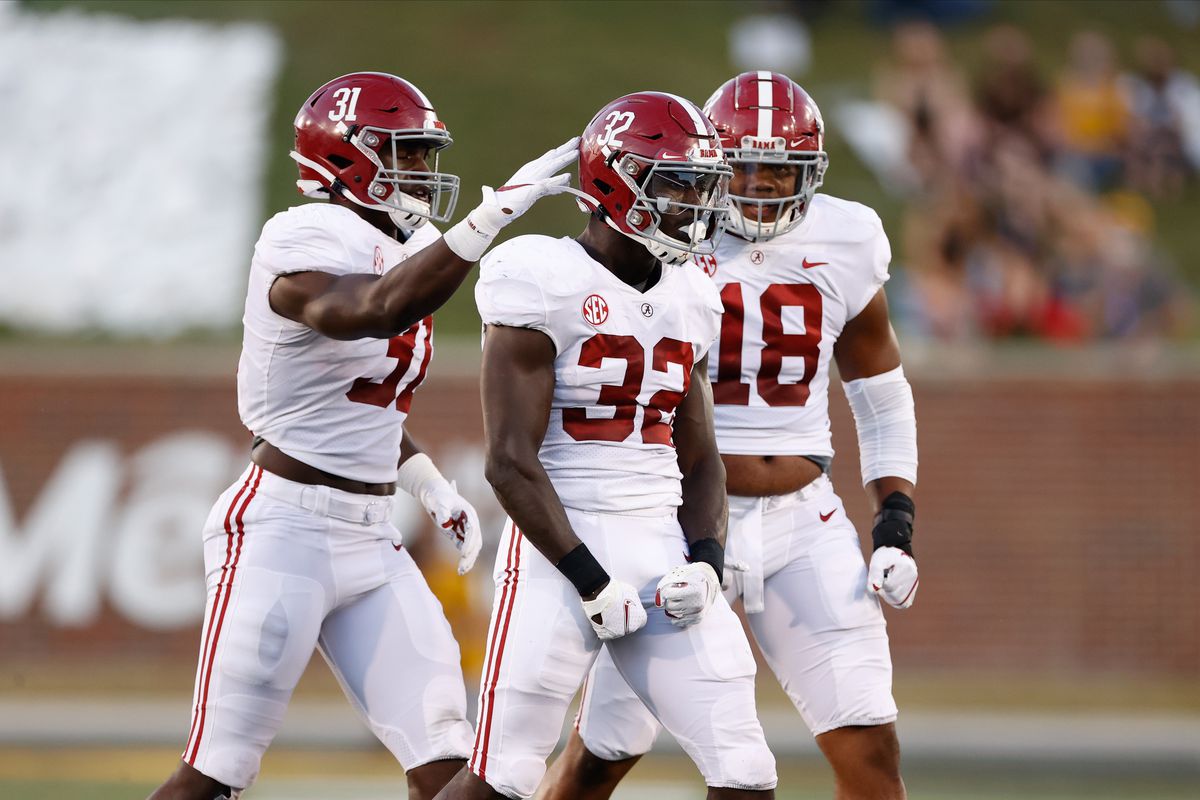 Fourth & Long: With Another Week In the Books, We Look Forward to Week 9 In College Football

In week 8 of college football, we saw it all. A big game goes down to the wire, replay mistakes, and of course another game where Clemson absolutely destroyed Syracuse. The question this week will be is anyone on the level of Clemson. Alabama lost star receiver, Jaylen Waddle, for the year due to a broken ankle, so their offense should take a step down. Ohio State did not miss a beat on Saturday, offensively at least. Justin Fields was 20/21 passing for 276 yards and two touchdowns. However, is this the year the Buckeyes don’t produce a top-5 pick? It seems to be that way, sans Justin Fields. The defense looked shaky in the Horseshoe on Saturday. Also breaking in two new offensive tackles on offense is not an easy task. With all that being said, Clemson just keeps cruising through the ACC. It’s possible that this year’s Clemson team is a step above both Alabama and Ohio State. Clemson will have to face Notre Dame in South Bend, in what will be Clemson’s biggest regular-season game in a while. Everyone knows weird and wacky things happen on Halloween, so let’s jump into week 9, or Halloween week.

Michigan State at (13) Michigan: After losing to previously win-less Rutgers, who knows where this Michigan State program is going. The Spartans let Rutgers gash them last weekend because of turnovers. Rocky Lombardi is back at quarterback for the Spartans did throw for three touchdowns, but he also threw two interceptions. Overall the Spartans turned the ball over seven times. After traveling to Minnesota last weekend, Michigan fans and players are riding high. Joe Milton seems like the guy for the job in Ann Arbor. He was 15/22 passing for 225 yards and one touchdown. Michigan is favored by 24.5 this game, but it should be a bit closer. If Mel Tucker and his Spartans can refrain from turning it over so often, this should be closer than expected. Prediction: (13) Michigan 34 Michigan State 21 (MSU +24.5)

(17) Indiana at Rutgers: Rutgers is riding mighty after winning their first B1G conference game in 22 tries. Rutgers didn’t necessarily beat Michigan State as much as Michigan State beat themselves. However, congratulations to Rutgers on your win, just don’t dwell on it because another losing streak might be on the horizon, starting with a much improved Indiana team. The Hoosiers got a little bit of luck last Saturday, as replay stood with the call on the field, which was the two-point conversion being good. Indiana moved the ball fairly easily on Penn State, and they should have a much easier time this week through the air. Look for Indiana to keep riding the wave, and put a beat down on Rutgers. Prediction: (17) Indiana 42 Rutgers 17 (No-line for this game yet.)

Boston College at (1) Clemson: Will this week be just like the rest of Clemson’s games? Boston College is a gritty team that can probably stick with Clemson for about a quarter, then the likes of Trevor Lawrence, Travis Etienne, and Amari Rodgers will put the game away. Clemson is favored by 31 in this match-up. One thing to watch in this game is if Lawrence is still confident as ever after throwing his first pick-six of his career versus Syracuse last weekend. Clemson rolls though. Prediction: (1) Clemson 52 Boston College 14 (Clemson -31)

(4) Notre Dame at Georgia Tech: The Fighting Irish had a great bounce-back game last weekend against Pitt. This came after Notre Dame squeaked by Louisville 12-7, at home none the less. Last Weekend the offense put up 45 points, but the defense was the real story, holding a potent Pitt offense to three points. Signal caller for the Irish, Ian Book, is the definition of a game manager. On the year he has 1,026 passing yards for six touchdowns and only one interception. Georgia Tech is still learning their own new offense so expect Notre Dame to exploit them defensively, and take advantage of that on offense. Prediction: (4) Notre Dame 37 Georgia Tech 14 (Notre Dame -20)

Western Kentucky at (11) BYU: BYU might be the hottest team in college football right now. Most of that credit goes to the offense and especially quarterback Zach Wilson. He has already thrown for almost 2,000 yards with 16 touchdowns and only one interception. BYU has played an incredibly easy slate of games. It would take something crazy to see the Cougars in Playoff contention. However, weirder things have happened in college football. Also, speaking of Wilson, he is squarely in Heisman contention. Prediction: (11) BYU 56 Western Kentucky 23 (BYU -29)

Mississippi State (1-3) vs #2 Alabama (5-0): Mississippi State has had two weeks to prepare for Alabama.  Mississippi State had a very impressive week one performance against the defending National Champion LSU Tigers, but that has been their only win of the season so far.  If they have used these two weeks to get their offense back on track to that week one performance then Mississippi State might be able to take advantage of Alabama’s struggling secondary especially with the big blow to Alabama’s receiving core and the loss of Jaylen Waddle.  Alabama needs to find someone to step into Waddle’s shows and DeVonta Smith might be the answer.  You also can’t forget the tank they have at running back in Heisman hopeful Najee Harris.  If Harris carries the team to a natty he makes himself a possible underdog to take it from the heavy favorite Trevor Lawrence.  As Justin says it best, getting into the late stages of the season the award comes down to what have you done for me lately. Prediction: Alabama 45, Miss. St. 14

Missouri (2-2) vs #10 Florida (2-1): Missouri has shown some really good things this year.  They have been able to control the tempo and a running game that has kept improving.  The only question for them is can the defense stop the Kyle-to-Kyle connection?  This is a must-win game for Florida.  Coming off a two-week break due to a COVID outbreak among the team and with reports coming out that players are still testing positive this week does not bode well for the Gators.  However, if this game does go forward the Gators should take this as an opportunity to silence the doubters and reestablish themselves like Cincinnati did this past week. Prediction (pending COVID results): Florida 42, Missouri 21

Texas (3-2) vs #6 Oklahoma State (4-0): This is a huge game for Oklahoma State.  When they are able to get the run game going they are unstoppable.  Currently, they lead the Big 12 with 216 yards per game.  Last week vs Iowa State their defense was tested, but Texas will give the Cowboys their biggest test defensively so far this year.  Texas’ biggest struggle is stopping the run game.  However, they are still holding teams to 3.5 yards a carry. Prediction:  Oklahoma St. 38, Texas 31

Memphis (3-1) vs #7 Cincinnati (4-0): This is a rematch of last year’s AAC Championship game and very well could be a preview of this year as well. Cincinnati’s defense had a very impressive outing last week holding a very high powered SMU offense to just 13 points even after a 21-day layoff.  Overall, Cincinnati’s defense hasn’t allowed more than 20 points all year, but Memphis and Brady White can have a big play explosion at any moment. The Bearcats look to continue their Cinderella story, but the Memphis look to keep their AAC Championship hopes alive. This is Halloween and anything can happen. Prediction: Memphis 31, Cincinnati 28

Game of the Week:

Jacob: #3 Ohio State (1-0) vs #18 Penn State (0-1): After last week’s controversial loss to Indiana, the hype surrounding the game has faded slightly.  Ohio State’s offense was what everyone expected it to be, great.  With Justin Fields looking like the second-best quarterback in the nation behind none other than Trevor Lawrence, he has the Buckeyes’ offense looking like one of the top offenses in the country.  Now that is saying a lot after a week one performance against a very underperforming Nebraska team, but the Penn State Nittany Lions are without star linebacker Micah Parsons.  This defense was not bad but struggled late against Indiana.  After all, this is Ohio State week, they are surely going to step up their performance against another very talented Ohio State team.  These games always make for interesting and entertaining football. This game will come down to if the Nittany Lions can keep Justin Fields in check and how they will keep the hype without the “White Out”. Prediction: Ohio St. 31, Penn St. 24

JB: (3) Ohio State at (18) Penn State: This was going to be one of the top three games of the year. It could have been an undefeated Buckeye team heading into the “White Out” in Happy Valley where a tough Penn State team awaits. However, there will be no white-out, and the only team undefeated in this match-up is Ohio State. After a heart-breaking loss to Indiana on Saturday, it will be interesting to see how Penn State responds. You have to think with a coach like James Franklin, there will be no quit in this team. With that being said, Ohio State’s offensive, especially their receiver group, is lethal. Justin Fields is back on the field showing everyone he deserves some Heisman hype already. Their receiving corps includes Chris Olave, Garrett Wilson, Julian Fleming, and Jaxon Smith-Njigba. The ladder two being a true freshman. Both sides of the line could use some work to get flowing as it should be. After producing elite defensive ends year after year, it sure seems like this year will be different. A defensive line is mostly a team unit, not one guy starring like it was in the past with guys like Chase Young and Nick and Joey Bosa. However, this is still an elite team, that should cruise through the B!G, and take their talents to the College Football Playoff. However, weird things do seem to happen on Halloween. Prediction: (3) Ohio State 45 (18) Penn State 31 (Ohio State -12)

Locks of the Week:

Well there you have it, after a big weekend in college football, we can look forward to a packed slate of games. The Longhorns take on Big 12 leader Oklahoma State, Cincinnati has a real chance to stay undefeated, and of course the Buckeyes travel to Happy Valley, where sadly there won’t be a “white out.” Make sure to tune into The Fourth & Long Podcast on Tuesday and Friday nights at 9:30 Eastern. This Friday Jacob will release his top ten, and see if he has any changes since Tuesday. Obviously our thoughts go out to any players, family members, and friends that have dealt with the virus. Tune in Friday night at 9:30 to see our week nine preview!

What Could Have Been

This Season Will Be Remembered for Centuries

Fourth & Long: Who Is On Your All-Decade College Football Team?
Fourth & Long Episode 5: Welcome to the Party B1G!