A Closer Look at Hangman Adam Page vs. Brian Cage 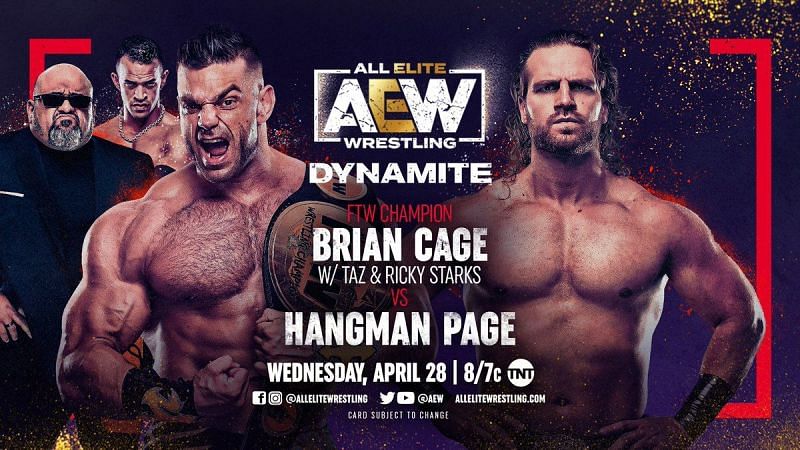 Last week on AEW Dynamite Hangman Adam Page was slated to wrestle Brian Cage of Team Tazz. In a surprising upset, Cage got the better of Page in a sub-six minute beat down. But the fascinating part is what this means for both men going forward.

Hangman’s recent form of nine consecutive single’s victories had him poised at the top of the rankings. Win after win surely would put him in a match at Double or Nothing against Kenny Omega. After a big victory of Ricky Starks on April 21, the title match was coming more into focus.

As one of the best wrestlers in the world, Adam Page will definitely win the AEW World Championship. His in ring performance and storytelling is beyond his years of experience. He is one of those athletes that just “gets it.” All the small nuances of his character, he hits. Then why did he lose you might be asking? Everything seemed to be setting it up perfectly for Double or Nothing. Why did Brian Cage win?

Ricky Starks and Brian Cage are both members of Team Tazz. So, it would make sense that they would talk about their matches together. After Ricky Starks came up short the week before, of course he would say something about it to Team Tazz. In order to get a win, things had to be different. And if you have a machine like Cage, why not use that to your advantage?

Whether it was Cage himself thinking of it or Tazz, jumping Hangman during his entrance was a great idea. It puts over the dangerousness of Team Tazz without having them interfere in the match. We have already seen the devastation that a powerbomb from Cage can have on someone in the ring. Now, imagine that from a fresh Brian Cage but on the ramp. A powerbomb on the ramp would surely knock the wind out of almost anyone. That combined with a brief assault by the other members of Team Tazz already put Page at a big disadvantage before the bell even rang.

Then, during the match, Cage targeted Hangman’s back, zeroing in on the weakened body part. All this informed the end of the match, when Cage was able to catch Page, hit the Drill Claw and take the win.

The win for Cage means a lot more than just a standard win would. First, it sets up Cage, who just defeated the number one contender, for a title match with Omega. It also boosts the danger and hype around Team Tazz as a strong faction that are a credible threat. Furthermore, it begins to establish Cage as a standout single’s act in Team Tazz, where a rift already exists.

On the opposite side of the result is Hangman Adam Page. Equally if not more so does this inform his next steps in AEW. Now, not only does this send him back to the back of the line, but also it could shake his confidence.

We have seen before when Hangman questioned his credibility about a year ago when he was teaming with Kenny Omega. Despite having one of the best tag team matches of all time, self-doubt still crept in. Going even further back, around Stadium Stampede (Double or Nothing 2020), he was doubting himself and even left The Elite in August.

All his self-doubt stemmed from the dawn of All Elite Wrestling, back at All Out in 2019. There, Page lost the first ever AEW Championship match to Chris Jericho.

Hangman was essentially brought into the company and heralded as “one to watch” for the future. He had his moment in 2019 to surpass his hype but fell flat against Jericho. From there, he had a brief reprieve winning the Tag Team Championships with Kenny Omega. But at All Out in 2020, he lost the titles to FTR. And now in 2021, his potential match for the World Championship seems to have slipped away. Fortunately, there is still time before All Out creeps up for Hangman to get back to that top spot in the rankings. But will he be able to shake his insecurities and fear of letting others down in time?

At All Out 2021, Hangman Page’s redemptive arc can come full circle. After two years of setbacks and defeats, Hangman Adam Page could catch his “white whale,” a win at All Out. Two years on from the title slipping through his fingers, Page could hold the AEW World Championship high.