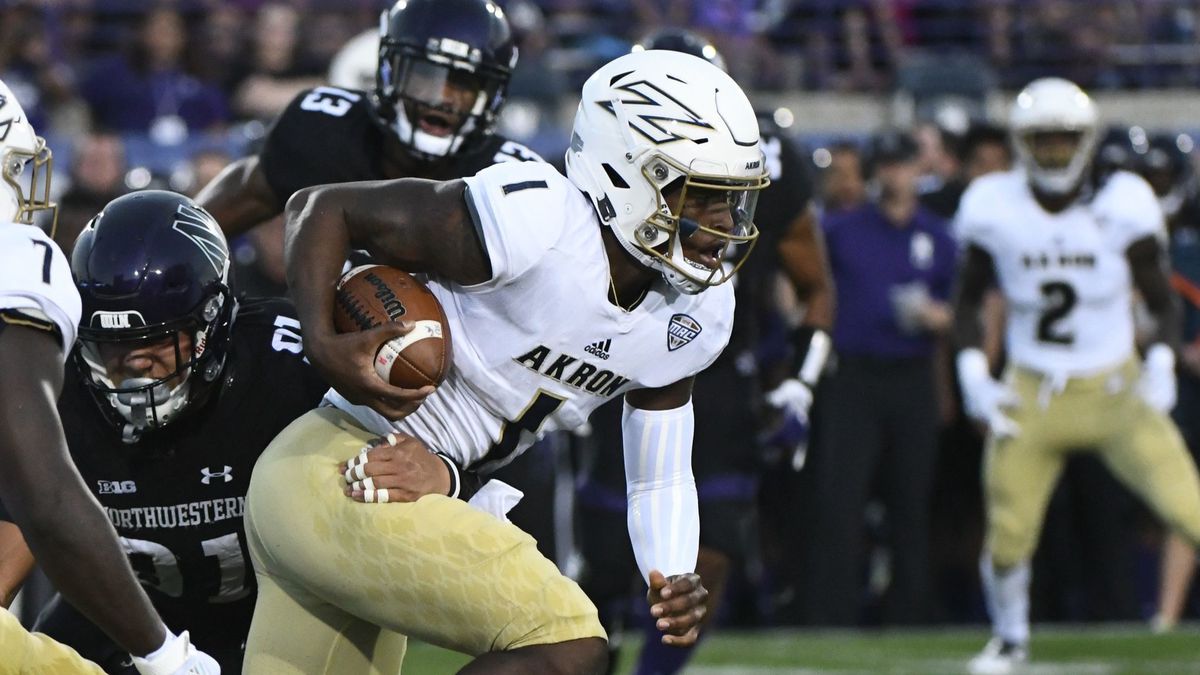 As teams around the country continue to postpone and cancel games, we have the Mid-American Conference to look forward to on the weekdays. (1) Alabama at LSU: Postponed. (5) Texas A&M at Tennessee: Postponed. (3) Ohio State at Maryland: straight up cancelled. However, we wish the best to all the players, staff members, coaches, and families who have been affected by COVID-19. It also looks like it’s only going to get worse as the weather gets colder. On the brighter side, we get to enjoy the always entertaining MAC football games on Tuesdays and Wednesdays. Six games took place over the past two days, so lets just dive right in!

As the first quarter came to a close, both Kent and Bowling Green were all knotted up at 10. However, that’s as close as the game would get. The Golden Flashes scored 28 unanswered points in the second quarter to take a commanding lead to go into half time.

After halftime, Kent kept pouring it on. It didn’t help that Bowling Green’s quarterback, Matt McDonald was 6-20 on the night with only 105 yards through the air. Kent had four fumbles on the night, luckily recovering all of them. Meanwhile, Bowling Green only fumbled twice, but lost one of the fumbles, so the Flashes won the turnover battle 1-0. The final score ended up being Kent State 62, Bowling Green 24.

Passing: Dustin Crum 18-27 for 271 yards and four touchdowns. There’s a reason this guy is on a lot of NFL teams’ radars.

Akron 10 at Ohio University 24: The Bobcats from Ohio University used their potent running attack, and suffocating defense to squeak by a pretty bad Akron team. De’Montre Tuggle, running back for the Bobcats, carried the ball 22 times for 139 yards and two touchdowns. The Zips did total more yards than the Bobcats, but they turned the ball over three times. If you win the turnover battle, you usually win the game, as is the case in this game in Athens, Ohio (Joe Burrow’s Home Town). Next week the Zips travel down the road to take on Kent State, and the Bobcats will travel to last year’s MAC Champions, Miami (OH).

Miami (OH) 10 at Buffalo 42: This was the match-up all MAC fans had been waiting for since the schedule was released. The RedHawks of Miami (OH), last year’s MAC Champions, traveled to Buffalo to take on the Bulls, who seem to be the team to beat this year. Buffalo went into the half with a 14-7 lead over the RedHawks. Whatever the coaches told them in the locker room, clearly worked. The Bulls came out and scored 21 unanswered points to take a commanding 35-7 lead. Miami (OH) kicked a late field goal, and Buffalo added one more score to put the icing on the cake. Bulls signal-caller Kyle Vantrease was sensational on the night, completing 17 of 27 passes for 353 yards and four scores. Miami (OH) quarterback AJ Mayer was down-right bad on Tuesday night. He completed just 7 of 25 passes for 116 yards, a touchdown, and an interception. Buffalo forced one turnover, an interception by Roy Baker, and put the game away. Next week Miami (OH) will host rivals Ohio University, and Buffalo will look to start 3-0 when they travel to Bowling Green.

Eastern Michigan 31 at Ball State 38: After a bad loss to Kent last week, the Eagles of Eastern Michigan were looking to bounce back versus Ball State. However, instead of a win, they suffered a seven point loss to the Cardinals. Both quarterbacks played pretty well in this game. The Eagles signal caller, Preston Hutchinson was 17-29, for 250 yards and one touchdown. On the other side of the field, the Cardinals Drew Pitt was 22-31 for 232 yards, one touchdown, and a pick. However, the star of the night was Ball State running back Caleb Huntley. Huntley was a work-horse, carrying the ball 34 times for 204 yards and three touchdowns. Eastern Michigan was also terrible on third downs, going 3-11. Unlike the previous three games, Ball State lost the turnover battle but won the game. Next week the Eagles of Eastern Michigan host Toledo, and the Cardinals will host Northern Illinois, looking to get their second straight win.

Toledo 38 at Western Michigan 41: By far the best game on the Mid-American conference slate this week, the Rockets of Toledo suffered a close loss to Western Michigan Wednesday night. Quarterback Kaleb Eleby of Western Michigan was 20-29 for 284 yards and three touchdowns. On the other sideline, Toledo signal caller, Eli Peters, was 30-46 for 339 yards, a touchdown, and one interception. In what was a tight match-up, the Broncos outscored the Rockets 20-7 in the fourth quarter to finish off the Rockets, who struggle outside of the Glass Bowl. D’Wayne Eskridge, receiver for the Broncos, was a big play machine all night. He caught seven passes for 131 yards and one touchdown. Next week the Rockets will look to bounce back versus 0-2 Eastern Michigan, and the Broncos will take their undefeated record to Central Michigan.

Central Michigan 40 at Northern Illinois 10: The Chippewas beat a struggling 0-2 Northern Illinois team on Wednesday night. Central Michigan led the entire game, whistle to whistle. Chippewas quarterback Daniel Richardson was 13-19 for 196 yards, two touchdowns, and one interception. The Central Michigan defense was on point Wednesday night, as they had one sack and eight tackles for loss. The Chippewas only gave up 74 yards rushing the entire game. Lew Nichols III, Central Michigan running back, was an explosive threat all night. He carried the ball 12 times for 91 yards and a touchdown. For those of us who don’t like math, that’s over 7.5 yards per carry! Next Week the Chippewas will host Western Michigan in a battle of two undefeated teams. As for the Huskies will travel to take on a streaking Ball State team.

Well, there you have, that’s all the MACtion recap everyone needs. It is a fair question to ask, since almost all MAC teams are in the northern part of the country, when the virus will affect the MAC as well. Hopefully not, because MAC football is just the best!