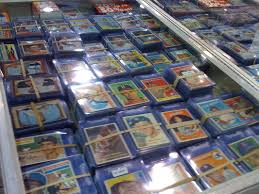 The Hot Corner Sports Memorabilia and Card shop is the last surviving, entity of its kind. Surprisingly were talking about in the heavily populated borough of Brooklyn, New York. The owner, Matthew E., sat down and gave an insightful interview on the ever-changing industry, that is trading cards. For this article, the focus will be solely baseball cards. Objectively speaking, at its peak, collecting baseball cards far outweighed the other sports in the industry.

The Hot Corner is located in southern Brooklyn. In the neighborhood made famous by Joe Torre and Chris Mullin, Marine Park. The owner was kind enough to give full disclosure and use his business’ name and their story for this piece. The interview can be listened to above, but to summarize the over five-minute conversation; there have been ups and downs.

The Hot Corner noted at one point in Brooklyn card trading was a thriving industry and the medium to obtain them was to go to your local card shop. This is no longer a reality, due to the double edged sword, that is the internet. He pointed out that marketplaces like EBay may have saved his business. Although the competition, didn’t realize the transformation taking place. Those competitors are no more, they cease to exist. He is the sole, sports card selling store in all of Brooklyn. He also sells rare memorabilia and emphasizes looking for rarities pre 1970.

So How Did He Stay Afloat, While Other Entities Went Belly Up?

So I posed the question; “How did you survive the decline of popularity of collectables?”. His answer was short and sweet; E-Bay. The internet marketplace is an auction based platform that, he says can give a fair value on most cards. The duality of the e-commerce aspect, is that the competitors simply did not catch on quickly enough. They were left in the dust and he says business is actually quite good. But his business model is two-fold, the first being a presence on E-Bay and selling the majority of his cards/memorabilia on the platform. Second, he still keeps the old-school, pleasurable experience of going into the store and purchasing cards. One can either buy packs, boxes, or even single cards. The perk of buying packs and boxes is that one may find a “diamond in the rough”. Others may have an inkling on a certain player and want to buy that individuals single card, which he also caters too. I myself purchased a Pete Alonso rookie card worth 15 dollars now, hoping he keeps his dominant form and the value skyrockets. Talking to his sales manager, Chris Z., he noted many aspects of the trading “game”. He divulged into when to sell a card, if a card’s value can reach a peak, or his true advice on some cards. He noted that buying a card when a player is injured, when they are a good player, may reap dividends down the road. He gave the example of Kevin Durant’s Nets card. Obviously “KD” is sidelined for the entirety of this season. But the manager noted that, if he comes back strong, the value of the card could skyrocket. Now on to the ins and outs of autographed cards.

Another benefit of buying a pack or box of cards, if that they may contain an autographed card or even an autographed rookie card. This is where a consumer can make their money. In regards to current events, someone possessing a Kobe Bryant Rookie card is definitely saddened by his death. Monetarily though, they are ecstatic at the value’s sudden spike caused by his tragic death. Many factors can rise a cards value, such as hall of fame induction(Jeter), aforementioned tragedy, retirement, and of course becoming an elite player.

E-Bay’s Role in a Possible Resurgence of Card Collection

E bay provides a fair value based on competing bids for cards. Essentially setting a market value for the card. Without such a medium, many card dealers of the past were left to “eye ball” and sometimes even set extreme prices for cards. The E-Commerce platform keeps businesses honest and the customer gets a fair shake. For example, the Alonso rookie card I purchased… was shown on EBay and the market value was shown.

The Peak of the Industry

One of the earliest industry’s to “cash in” on Baseball players’ likenesses were tobacco companies. In the reconstruction era, the tobacco industry also started utilizing baseball players as marketing ploys. Although Antebellum Cards existed, this is the point where “the ball started rolling”. Usually a pack of cigarettes would contain one card and were much smaller than the baseball cards of the modern era. The company most notable for this tactic was Goodwin & Co. tobacco products.

After the war ended, starting in the early 1930’s, Baseball was truly becoming America’s national pastime. Now the chewing gum industry dominated the card producing market. One prominent company was Topps Chewing gum company, which we now know as Topps. Known instinctively for its cards now… not gum.

The baseball card collecting culture as was once a mainstay, cultural norm could be evaporated in a matter of decades. Sure, some rookie autographed cards will still auction for huge sums to avid collectors. But the days of going to the memorabilia shop and purchasing packs of cards could be fading away. The excitement that spending 5-10 bucks on a pack of cards and finding a “diamond in the rough” …could be simply a thing of the past.Yes, the internet will save the card industry momentarily, but for how long? Public interest and the dying out of small businesses could compact an already dire situation. This may not seem like a huge deal to some, but for baseball fans; card collecting was almost like religion. One can attest to the pure thrill and natural high one received, when they were about to open that pack of cards. Walking home with the pack, hoping to get your favorite player or even a long-time lucrative investment asset. These memories that many fans can truly attest too are in dire straits. If the next generation will revive this once massive passion and hobby…is in direct correlation the game as a whole. The pace of play speeding up, setting certain rules to make the game more exciting to watch may be a little too late. American’s love options and now they have sports that don’t need any alterations. With baseball’s rapid decline, subsequently it’s card industry is in danger big time. To see this phenomenon, is almost devastating as a true fan. Along with the tragedies of so many small businesses closing down. In Brooklyn, with such a rich baseball culture and heritage the impact is clearly evident. Three million plus people and there is one trading card memorabilia shop still open. These local businesses are just a memory, now non existent due to a once lucrative commodity, possibly going down with the ship