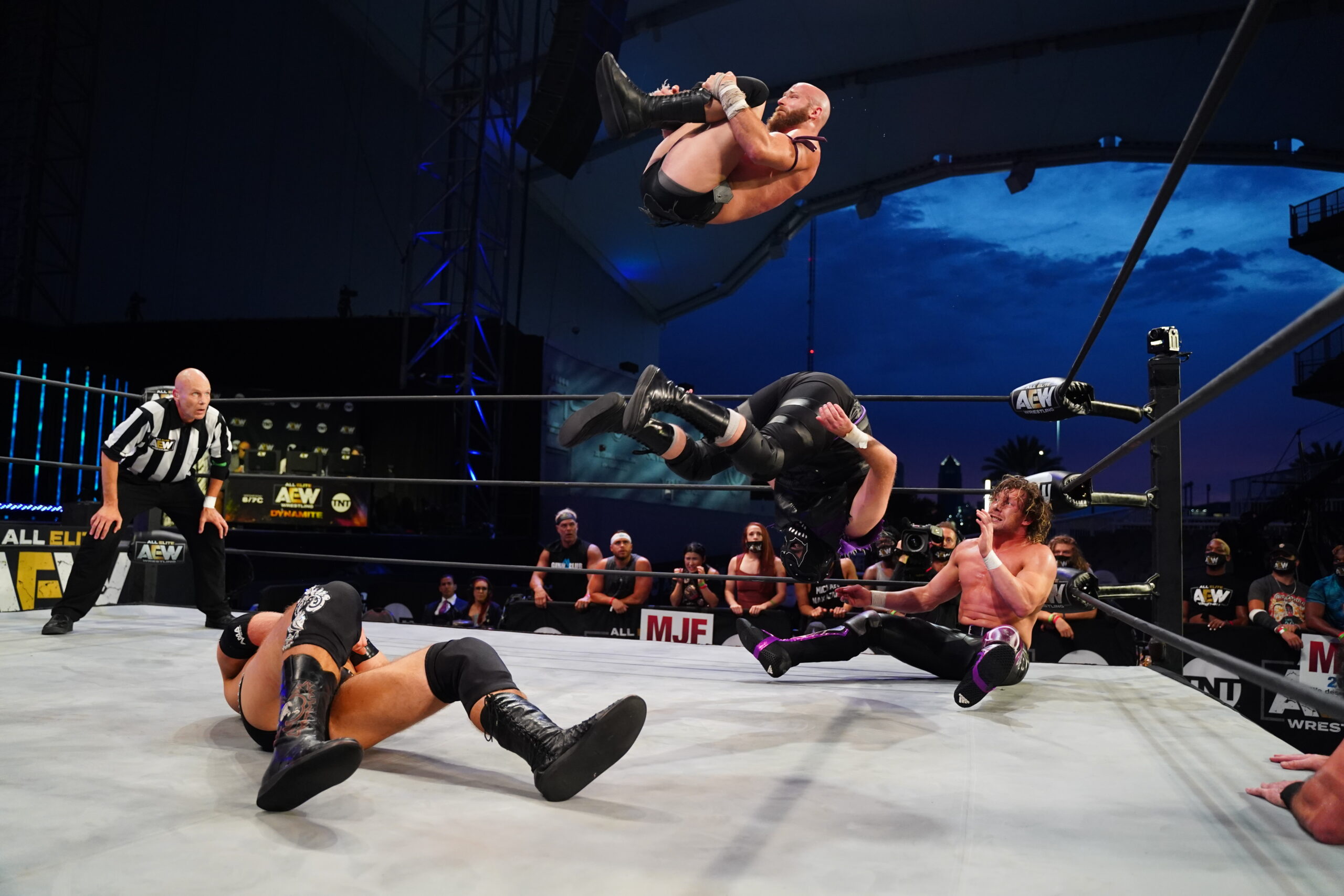 Another week, another excellent show for Tony Khan and AEW.

With a huge 10-man tag match and the debut of a certain “indie darling”, Dynamite continued their run of high-quality shows Wednesday night.

Airing again from Daily’s Place in Jacksonville, FL, the commentary team of Jim Ross, Tony Schiavone and Taz, the show began with the Inner Circle making their way to the ring for the opening contest.

The match begins with Orange Cassidy and Jake Hager, with Cassidy hitting Hager with his “devastating” kicks. Of course Hager no-sells them, throwing Cassidy into the corner. All members of the Inner Circle begin attacking Cassidy, before Jurassic Express and Best Friends make the save. As we move to the outside, Trent hits a huge moonsault, knocking everyone down. After some back and forth, including Marko Stunt getting thrown into Hager, Luchasaurus hits a huge dive on the outside. With Cassidy in the ring, the rest of his team joins “The King of Sloth Style” before Sammy Guevara jumps off the top rope, completely missing. Jungle Boy hits a nice clothesline on Guevara in the corner before referee Aubrey Edwards gets everything under control. The match goes on with a few nearfalls by both teams before Cassidy hits a huge Superman Punch, before everyone hits their finishers, including a devastating Torture Rack into a knee. Jericho grabs the bat before being tossed over the barricade by Cassidy. Guevara goes to the top rope, but is thrown off by Matt Hardy, who appears on the apron to help Luchasaurus get hit the chokeslam for the three-count. **½. The action was there, but for the ten men involved in this match, I expected more. This was definitely more of a spot-fest than it was a normal tag, but everyone was given time to shine. It’s good to see the Guevara-Hardy feud continuing, and it will be interesting to see what the company does with the returning Guevara after his suspension from previous comments he made.

Following the match, we get a quick promo from AEW Champion Jon Moxley on challenger Brian Cage attacking Darby Allin last week, claiming that he will “finish the fight”.

Warhorse has long been rumored to be a future challenger for Cody’s TNT Championship, and we are finally getting to see that match here. Cody begins by working over Warhorse’s arm, before Warhorse hits Cody with chops in the corner. The challenger goes for a quick roll-through, before working on the arm. We see Cody show some anger, something that he’s been showing a lot more recently, possibly teasing a heel turn. A nice clothesline by Warhorse for another two-count, but the champion follows up with a drop toe hold into the turnbuckle. Cody hits a massive superplex off the top rope for a nearfall, before locking the challenger in a Figure Four. Some fast-paced action leads to Warhorse climbing to the top rope, hitting an elbow drop for two before a quick exchange of pinfalls leads to a dropkick by Cody to the knee. The champion locks in another Figure Four, finally forcing the challenger to tap. ***. I had never seen a Warhorse match, but I walked away from this one thoroughly impressed. The man can really sell for his opponents, as both men walk away from this match looking better than they entered. Kudos to Cody for again stepping up to the plate, giving the fans the match they have been asking for. The “Open Challenge” formula has been used a lot recently in wrestling, but Cody has really stepped up week-in and week-out.

After the match, we see members of the Dark Order rush down to the ring to attack both men. It looks like Arn Anderson is going to have to defend himself before a debuting Matt Cardona makes the save. The former Zack Ryder in WWE hits both members of the Dark Order with Radio Silence, before we head to break. When we return, Chris Jericho comes out to say that there will be a debate with Orange Cassidy next week, hosted by a special guest monitor.

FTR is shown signing their AEW contracts before Arn Anderson comes in to help them sign. The tag team mentions a guaranteed “Tag Team Appreciation Night” in their contract, so we should be seeing that sometime soon. “Hangman” Adam Page comes in to celebrate with the team, further teasing a future partnership between the three.

Some quick pins start this match, including Page hitting a standing shooting star press for a nearfall. The fight doesn’t stay in the ring for very long with Page hitting a crossbody on Grayson before being sent into the ringpost. Omega tries to make the save, but Uno sends him flying into the barricade to take control of the match. A running knee from Grayson gets a quick kick out from Page, but the two members of the Dark Order hit a suplex to neutralize the champion. Omega comes in to make the stop on the pin attempt, hitting a rolling senton and moonsault later on in the match for a two count. Dark Order gets a few more near falls off of a powerbomb and senton before Grayson suplexes Omega into Page. A great show of tag team wrestling, Uno hits a cannonball on Page in the corner before Grayson hits a splash off the top rope, however, the champs kick out. The match ends with Page powerbombing Uno with Omega hitting a running knee for the win. *** ½. You can always expect a great match with Omega and Page. They were a great choice for tag champs and it will be a big blow to the division when they inevitably break up and feud. The Dark Order looked good here, but hopefully they get more chances to shine in the future. One of the best matches on the show.

After grabbing a win last week against Ivelisse, Diamante earned a non-title match here against AEW Women’s Champion Hikaru Shida. She immediately gets in the face of the champion with Shida connecting with some rights and a knee in the corner. Shida hits a knee lift on Diamante, who is hanging on the barricade before throwing her back in the ring to hit a missile dropkick for two. The champ goes to the top rope again later in the match but is stopped by Diamante, who hits a flurry of chops in the corner. A nice stunner by Diamante gets a two count, but the champ proves why she is the leader of the women’s division, hitting a running knee for the pin and the win. **½. This was fine for what it was. The champ really sold for Diamante, making everything the challenger threw at her seem like it really hurt. Diamante also hit a lot of vicious chops to Shida’s chest, taking the champion off her game. It will be interesting to see if Diamante will get a title match in the future, hopefully one that goes a little longer than this match.

MJF is in the ring with full presidential campaign signage around him. The heel talks about how AEW needs to go back to being the revolutionary company they were when they first started, with a change in champion being his solution. Asking fans to use #NOTMYCHAMPION, MJF gave an absolutely amazing promo, even adding in a few jabs at champion Jon Moxley’s time in WWE. One of the best talkers in the business today, MJF needs to be given an open mic every Wednesday.

The action gets started before the bell even rings with Darby jumping over the top rope onto Cage on the outside. The two heels take advantage early, double teaming Moxley before Darby makes the save with a dropkick on Starks. Moxley puts Starks in a sleeper hold on the apron, but is quickly stopped by Cage who hits Allin with a powerbomb and Moxley with a press slam at the same time in a really cool spot. Moxley introduces a chair to the face of Starks while also hitting Cage with a piledriver for two. However, the heels take control again, putting Moxley through a trash can with an Alabama Slam. Cage goes for a buckle bomb on Allin in the corner, but the champ saves him before hitting a DDT. Moxley hits a suicide dive on the outside before Allin introduced a skateboard with thumbtacks on the bottom, driving it into the back of Starks for the three count in a brutal spot. ***½. I really enjoyed this match. This could have been a lot longer, but the action was fast-paced throughout. The skateboard spot was brutal and very different from what you see in wrestling today. Overall, a great match that should lead to an even better match between Allin and Moxley for the title next week.

It’s hard to beat consistency, and for AEW, they consistently deliver. Another solid show that set up the upcoming All Out PPV, the company continues to make it really hard for wrestling fans to change the channel.

James Paxton or Masahiro Tanaka? Which Free Agent Pitcher will the Yankees Re-Sign in the Offseason?
Expectations for the Atlanta Falcons this Season