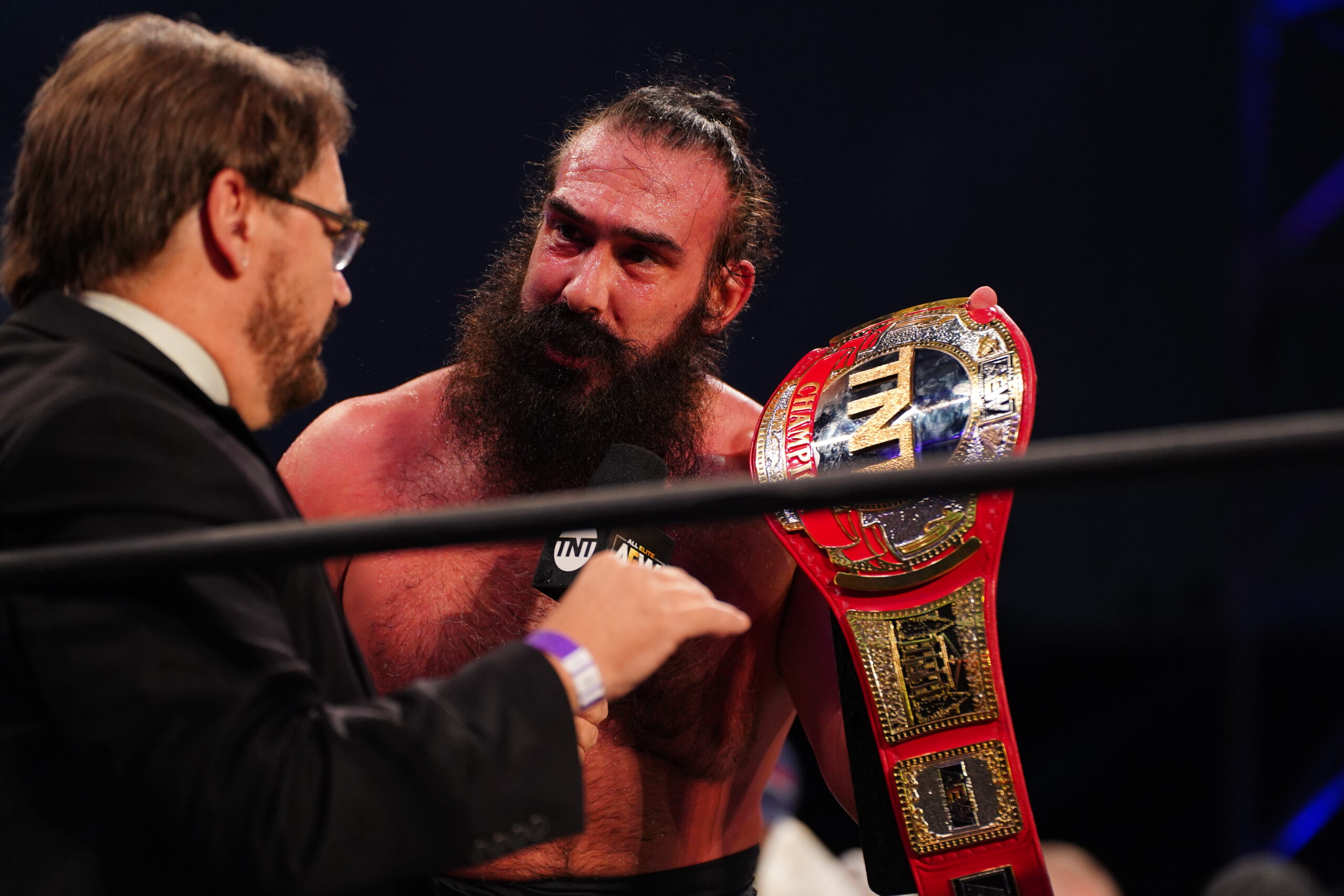 Thanks to the ongoing NBA Playoffs, All Elite Wrestling aired a special Saturday night episode of Dynamite.

With a huge TNT Championship match and the finals of the Deadly Draw Tag Team Tournament, AEW focused much of the night on the buildup for the upcoming All Out pay-per-view.

Airing from Daily’s Place in Jacksonville, FL, the commentary team of Jim Ross, Tony Schiavone and Taz get us started with two of the best tag teams in the business.

We see a flashback of FTR’s attack on Ricky Morton last week as both members of FTR get hit with dropkicks to start the match. FTR gets sent outside and begins talking strategy with Tully Blanchard. Quick tags from Private Party help the team gain momentum before Marq Quen takes Dax Harwood down with a hammerlock. Cash Wheeler gets tagged in after a double clothesline to Quen, allowing FTR to take control of the match. Quen hits a nice suplex but can’t make the tag, being stopped by Harwood. Cash tries a dive to the outside, but Quen moves out of the way just in time. Quen finally gets the hot tag to Isiah Kassidy, who comes in and knocks down both members of FTR. He goes for the pin on Harwood, but only gets a two count. A quick tag by Quen followed by a crossbody off the top rope leads to another two count. An absolutely devastating spinebuster by FTR to Quen almost wins the match, but Kassidy makes the save. Kassidy tries to launch himself over the top rope onto Harwood, but Tully Blanchard pulls him out of harm’s way, allowing FTR to hit the Goodnight Express for the win. ***. This was nothing special, more of your standard tag team match. These two tag teams have the skill to steal the show every night, but this just felt like another run of the mill tag match. Not bad, but nothing spectacular. I like FTR aligning themselves with Tully Blanchard, adding a veteran managerial presence to one of the best tag teams in the business. Overall, a solid, if unspectacular way to start the show.

Following the match, we get another promo from AEW Champion Jon Moxley about his match at All Out against MJF. Moxley says that he wants MJF to be the leader of this company for the next 25 years and reach his full potential before stating that he will beat the hell out of MJF at All Out.

MJF continues his campaign to be the next AEW champion, claiming that Moxley is as much of a dictator as Napoleon. He talks about being attacked last week from behind by Moxley, almost being brought to tears. His lawyer chimes in, claiming that they have millions of signatures for the Paradigm Shift to be banned. They introduce a contract that says the move should be banned for the match, saying that if Moxley doesn’t sign, he will be sued. Sounds like Moxley will have to find another way to keep his title come Sept. 5.

The Natural Nightmares and Jurassic Express v. The Lucha Bros and The Butcher and The Blade

Everyone starts attacking each other before the bell. Both Lucha Bros hit some huge dives before hitting QT Marshall with chops. Marshall gets attacked by both The Butcher and The Blade before making the tag to Dustin Rhodes. Rhodes hits The Blade with a clothesline that takes him off his feet before setting his sights on the big man’s arm. Rhodes gets thrown to the outside before taking some leg kicks by Pentagon. After a picture-in-picture, we see Rhodes finally get the tag to Luchasaurus. Jungle Boy also gets involved, hitting dives all over the place. Luchasaurus hits a big chokeslam and a standing moonsault on Pentagon. Rhodes hit a Canadian Destroyer before The Blade gets pushed by Pentagon into a roll-up by Jungle Boy for the win. **. Again, for as much talent as there was in this match, this felt rushed. The action didn’t pick up until the last few minutes of the match, which was basically just a giant spot fest. The aftermath of the match with Eddie Kingston trying to get the heels to align with him based on their time in the indies is an interesting one, as Kingston has always been one of my favorite wrestlers in the business. The five of them could work really well together with Kingston being the leader, so here’s to hoping we see them create a large stable. Another so-so match for AEW.

After the match, we see Britt Baker offering Kip Sabian and Penelope Ford free dental care for a year if they help her in her match with Big Swole. The match will now be a handicap match with Ford agreeing.

Orange Cassidy comes out to interview with Tony Schiavone but before he can say anything, Chris Jericho comes out. He congratulates Cassidy on beating him and states that they need a third match to decide who is the better man. Jericho talks about how he came up with a match involving a briefcase and some ladders before challenging Cassidy to a Mimosa Mayhem Match. Cassidy accepts before him and The Best Friends get attacked by the Inner Circle.

The match starts off hot with The Elite taking control quickly. Omega goes to the top rope, but gets shoved off to the floor before taking a chair shot to the face. Omega gets a chair stomped into his chest from the apron as we see the heels take advantage with a dive to the floor. Dark Order goes for a stomp from the top rope, but Omega moves out of the way and hits a clothesline before making the hot tag to Nick Jackson. Nick hits a really nice backstabber before tagging in his brother Matt. A cool bulldog/dropkick combination by the brothers takes down as the match continues. “5” tries for a springboard moonsault, but is met with double superkicks from the Bucks. Omega hits the One-Winged Angel for the win before grabbing a chair and hinting at powerbombing 5 on it. However, the Bucks talk him out of it as we head to commercial. ***½. I love the fact that we keep getting more and more hints of Omega turning heel. I think his work in New Japan is some of the best in the history of the sport and the wealth of talent in AEW can really show that to the Western audience. This was a really solid match, the best of the night at this point. Hopefully the Dark Order will start to get some wins under their belt sooner rather than later.

Allin starts by hitting the big man with a dropkick and a dive before the bell. Hobbs throws Allin all over the ring, hitting a nice spinebuster for a nearfall. He goes for the powerslam, but Allin wiggles out and hits a springboard back elbow. The match ends with Allin hitting the Coffin Drop from the top rope in a rather quick match. Taz gets on the mic and brings out Ricky Starks dressed up like Allin, skateboard and all. Distracted, Allin gets hit from behind by Brian Cage with the FTW championship before Starks hits his own Coffin Drop. **. The match was nothing special, being a rather quick one. However, I love the dynamic between Starks, Cage and Taz. I imagine we will see Allin take on one of the two at All Out which has the opportunity to steal the show if they are given the right amount of time. I’ve always really enjoyed Allin in the ring, and I think he will prove his excellence no matter who he faces.

Sammy Guevara is out next with his signs, apologizing to Matt Hardy for putting him out of action. One of his signs says that he is sorry that Sammy is an idiot and that he is about to be broken before realizing too late as Matt comes out to attack him from behind. Matt is absolutely destroying Guevara with a chair before putting him through a table. He looks for revenge for the chair to the head a few weeks ago but is stopped by some referees. Sammy gets helped to the back as Matt promises to end him.

Brandi takes a big knee to the head from Ivelisse to start the match before hitting a nice headlock takedown. Diamante comes in as her and Ivelisse hit a double hiptoss before Brandi tags in Allie. Brandi hits the spear on Diamante before Allie hits The Rabbit Hole. Ivelisse comes in and hits QT Marshall with an elbow as he goes for the distraction, allowing her to get the pin on Allie to win the cup. **½. For as much as they advertised this tournament, this was nothing special. AEW had a really good opportunity to build up their women’s tag team division, something that WWE has struggled with, but this was just okay. They had a good amount of time, but the two teams just didn’t click as much as I thought they would. Hopefully winning the cup will give Ivelisse and Diamante a chance to break out.

Cody goes for the quick attack on Lee but is immediately thrown to the floor by the big man. Lee sends him into the railing before delivering a big boot that sends him over it. Back into the ring we go as Lee is just dominating Cody. He hits a german suplex followed by two powerbombs and the discus clothesline for the quick, dominant win. Cody gets stretchered out as Schiavone interviews Lee in the ring. The Dark Order begins to attack Arn Anderson, Cody and the rest of the Nightmare Family to close out the show. *****. WOW! This was awesome. Cody has been great at showcasing rising talent with his open challenge every week, but this had some major Brock/Cena vibes from Summerslam 2014. Lee looked as dominant as he beat Cody all around the ring in a quick squash. Kudos to AEW for ending the show on such a high note.

Not the best show, but overall, AEW delivered with a solid ending to their special Saturday night edition of Dynamite. Lee will be a dominant champion and the inevitable rematch at All Out will hopefully get more time. The Sept. 5 show is really starting to take shape and looks to be another excellent pay-per-view for the young company.