AEW Women To Main Event Dynamite In Lights Out Match 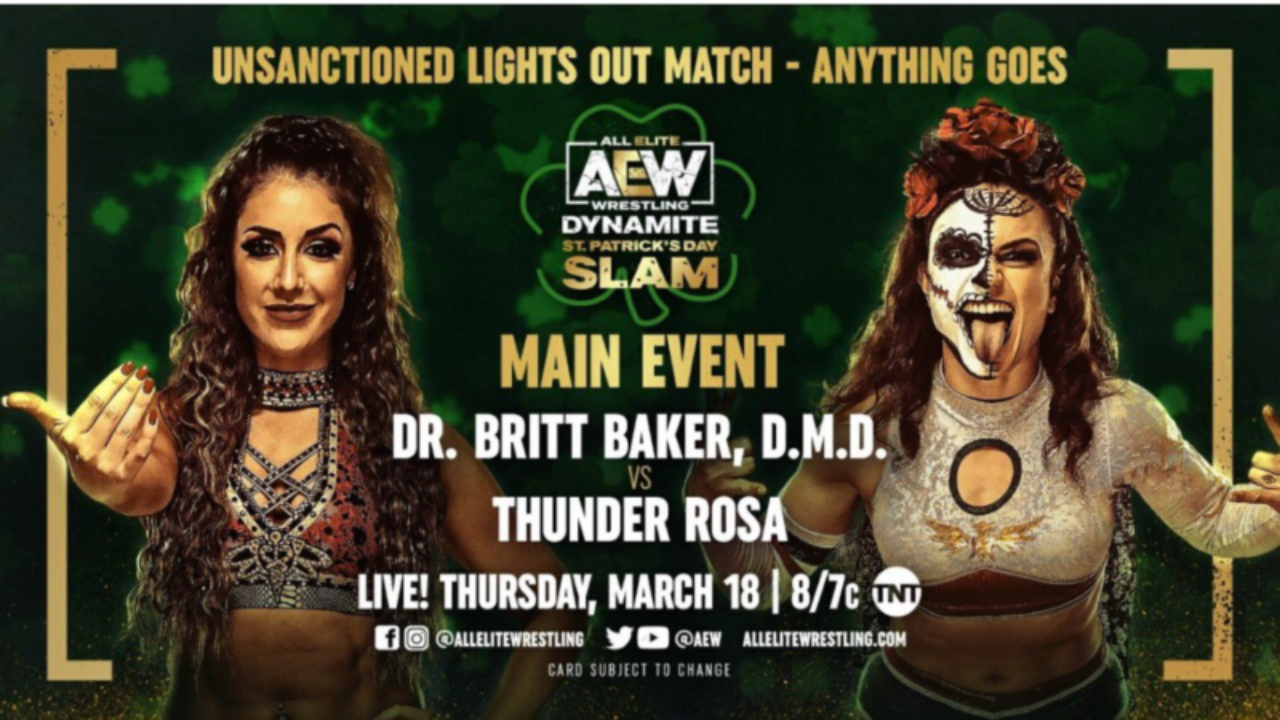 After the conclusion of AEW Revolution, Tony Khan informed the media that a main event match featuring women is, “going to happen incredibly soon.” Quickly, fans speculated on how soon the match would occur and who it could headline. Viewers did not have to wait long, as this week’s Dynamite gave them the answer. A Lights Out Match between Dr. Britt Baker D.M.D. and Thunder Rosa is scheduled for the March 17 episode of AEW Dynamite.

This announcement comes in the wake of Dr. Baker clamping her “Lockjaw” submission onto Rosa, while Rebel beat down Rosa with a crutch. This is not the first time these women have had a problem with each other. At Beach Break over two months ago, we saw Baker best Rosa in a 13 minute scrap. But with tensions still running high, they were in opposite corners in a match on Revolution’s Buy In show. A Lights Out Match was the only way that made sense for Khan to allow these women to settle their score, once and for all.

This match is a monumental moment for the women’s division in AEW. It is no secret that the division has been under scrutiny by fans. Too often, the women were in poor time slots and had not been given a chance to grow. But recently, the women have been climbing the ratings for quite a few weeks. Their spot on the card moved away from right before the main event. Additionally, the match quality has increased across the board. There are ready made stars in the women’s locker room and now is their time to shine. The main event match in AEW is the perfect time for the women to seize their moment.

Dr. Baker is phenomenally talented and has such a great personality. Despite being sidelined with an injury in May of 2020, she still found a way to shine on television. Without having a match in three months, she became a fan favourite alongside her self-proclaimed “best friend,” Tony Schiavone. She has a unique command over the audience and plays her role excellently. As the first woman signed to All Elite Wrestling and now the first woman to main event, she is one of the trailblazers of this division.

On the other side of the ring will be Thunder Rosa. The 5’ 3” superstar combines wrestling styles from all over the world in the ring. She picks up a new technique from each of the cultures where which she wrestlers. Not to mention all the experience she has from over 300 matches, Thunder Rosa made herself one of the most well rounded wrestlers in the division. The former NWA World Women’s Champion strives to make “women’s wrestling” synonymous with just wrestling. Equally, Dr. Baker is right alongside her on that quest, and they are both well on their way to do that in the first ever AEW main event match to feature women.

The Lights Out Match

Fans may have seen a Lights Out Match in AEW before as it has occurred a couple of times. Kenny Omega and Joey Janela brutalized each other in the match in October 2019. Omega, once again, participated in another Lights Out Match just two months later against Jon Moxley. The two combatants went to war at 2019’s Full Gear. Utilizing a slew of dangerous tools and weapons, the pair battled for nearly 39 minutes in front of a roaring crowd.

The match’s innate viciousness proves to be a difficult stipulation for many wrestlers to excel in. Yet, the creativity, ingenuity and grit of both ladies will be on full display when women headline Dynamite for the first time ever. Thunder Rosa is the kind of wrestler who thrives in this environment. We have seen broken glass, mouse trap boards and barbed wire all used before. Maybe Dr. Baker will appropriately bring some dental tools to assault Thunder Rosa. What does Rosa have in her bag of tricks to dish out some payback? Ultimately, we will just have to watch Dynamite next week to find out. Whatever happens, this fight could be a contender for the match of the month.