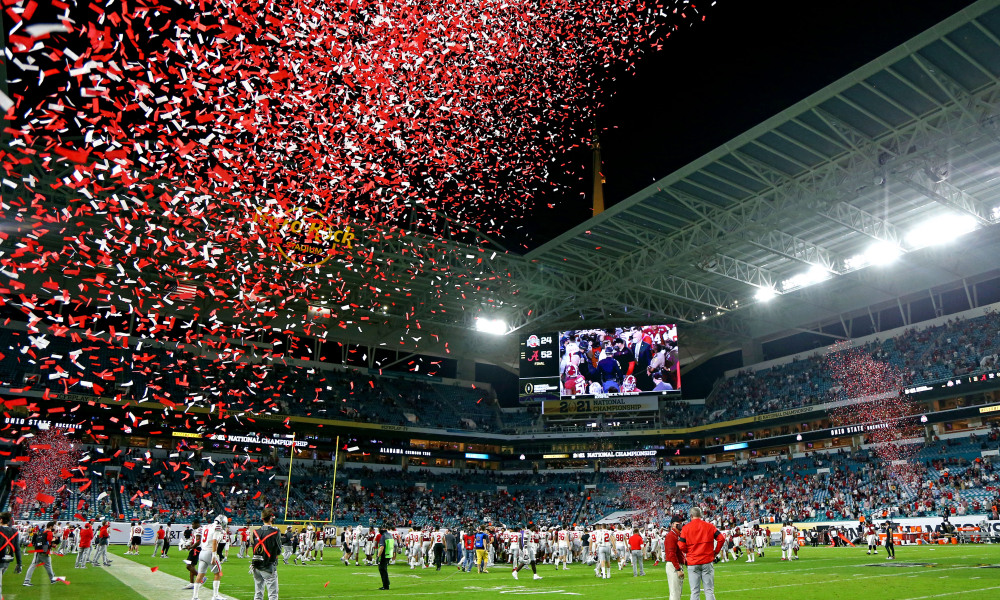 Well, the state of Ohio had no more luck to give to the Buckeyes on Monday Night. All of the luck was used up in the Browns first playoff win on Sunday night. Ohio State played hard, and the first quarter was a back and forth affair. In the end, Nick Saban’s most talented Alabama team in years, was just too good and the Crimson Tide won their 18th National Championship on Monday night. It was also Nick Saban’s seventh national championship during his tenure at Alabama.

At the end of the first quarter the game was tied at 7-7. However, from there, the three headed monster that is Mac Jones, Najee Harris, and Devonta Smith took over and guided the Tide to a 35-17 halftime lead. In the first half alone, Heisman Winner Devonta Smith had 12 catches for 215 yards and three touchdowns.

Ohio State came out of halftime looking to fight back and catch up to the Tide. However, the Tide weren’t really a team that you can come back on. Alabama had five offensive possessions on Monday night, and they scored on all but two. One was a punt and the other was the end of the game. Tide quarterback Mac Jones was 36-45 for 464 yards and five touchdowns. Tide running back Najee Harris was a huge factor in the Tide’s running game and passing attack. He had 22 carries for 79 yards and two touchdowns. He also caught seven passes for 79 yards and another score.

The Tide were simply the better team on Monday night. It also didn’t help that Trey Sermon, Buckeyes running back, left the game after one carry in the first quarter. On top of that, Justin Fields was only playing at about 90%, and Ohio State still had some players out with COVID. Fields was 17-33 for 194 yards and a touchdown.

For both Alabama and Ohio State, the reloading process begins today. Alabama’s big three are all most likely to enter the NFL Draft, along with Buckeye players Justin Fields, Chris Olave, and Shaun Wade. However, as most college football fans know, Ohio State and Alabama don’t rebuild, they reload. Bryce Young garnered a lot of hype before even stepping on Alabama’s campus. He will be the man who likely replaces Mac Jones. According to most sports books, Young has the fifth best odds to win the Heisman Trophy next year, and he hasn’t even seen the field yet. For the Buckeyes, Justin Fields will likely be replaced by Harry Miller III, who has almost all of the state of Arizona’s football passing records.

All in all, it was great that the season was able to played in its entirety. However, in the end the two best teams in the country got to battle it out on the gridiron. The college football playoff system could use a couple changes, but it worked to perfection this year. Alabama and Ohio State were the two best teams in the country this year, and the season ended with both of those teams on the gridiron.

It is never too early to take a look at next year’s college football season. Alabama and Ohio State will be in the mix for the top four next year, along with Clemson, Georgia, Oklahoma, and possibly USC. With that, let’s take a gander at my Way-Too-Early 2021-2022 Top Five: