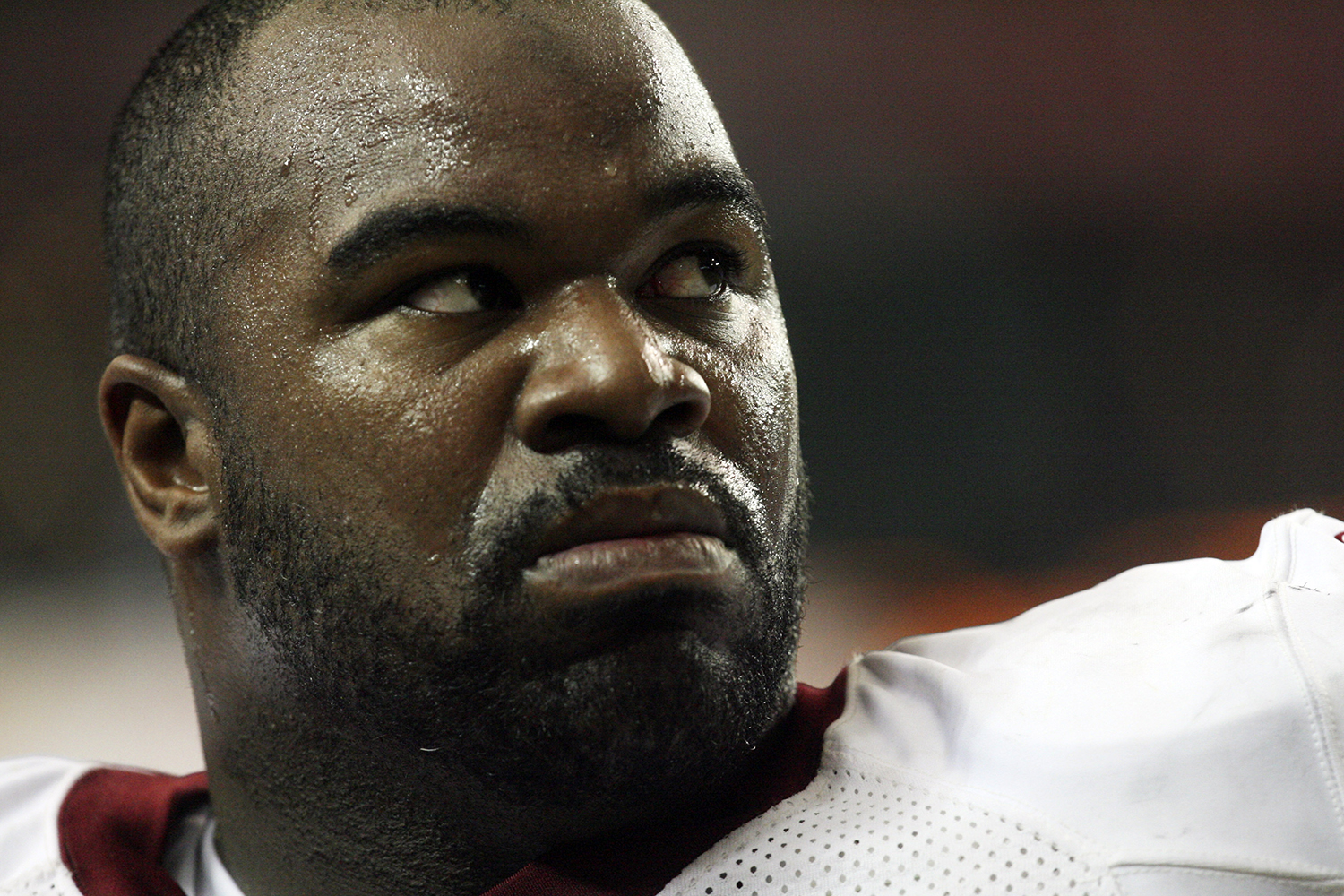 Regardless of how you see Haynesworth, he is much more than that. He is someone that has a huge part of his heart and soul in charity work and helping other people. He is also someone that has many passions in his life aside from football, which we all know him for. I received a great opportunity to talk with Albert about who he really is and what he strives for in his life. Oh yeah, I also managed to squeeze in a few questions about football.

Just so everyone knows how much of a polar opposite Haynesworth is from his on-the-field persona, I asked him about his foundation and what he is truly striving for in his pursuit of other peoples’ happiness and well-being.

“It took me eight years to come up with the right idea for a foundation. I looked at a lot of players’ foundations, and there’s nothing wrong with it or anything, but a lot of players are focused on I guess one thing that hits home for them; you know it could be disease, foster kids, homeless people, anything and that’s all good and great. But my thing is our slogan, ‘Change the world, one need at a time.’ I want to be able to help orphans, I want to help cure diseases, I want to help the homeless, battered women, young men growing up without a father, trying to lead them in the right direction,” stated Haynesworth.

Haynesworth continued, “One thing that I’m big on is that you see a lot of foundations, or you see a lot of organizations out here, that ask for money. You know what, save the kids from Haiti, ten bucks a month and you can sponsor a kid; they probably only give the kid a dollar, two dollars, out of all that money. I mean, the things about foundations, you only have to spend ten percent of what you get and so whatever you donate, they donate ten percent of that and keep the rest. One thing is [for my foundation] I’m going to fund the staff and so 100 percent of the money is going to go to whatever cause that we’re working on in that point in time.”

Listening to Haynesworth being so upfront and honest with me about what makes his foundation stand out amongst those of his fellow philanthropists led me to probe deeper into what he wants to achieve. Different causes with their own principal purpose were mentioned in his reply, beginning with the Haynesworth Freeze.

“Well, instead of just giving money, I want to see things get done. As far as schools, there are some schools in D.C. that don’t have air conditioning. All we’re going to do is go in there, raise this money, go buy the air conditioners, fix the school. It’s not going to be a guessing game wondering how much of your money went there; you’re going to see it.”

“You go around, you get stores to donate hardware and you go and fix the peoples’ houses. You get a list and some people have holes in their roof; in their living room or kitchen. It’s crazy. They didn’t have running water, so you’d be able to go in there and actually fix these peoples’ houses and make their houses livable.”

Aside from his deep involvement with charity and fundraising for great causes, Haynesworth is quite the boat enthusiast and loves the mix of serenity and exhilaration they mesh together so well.

“It’s just so calm and relaxing and sometimes I’m going up to 160 mph in the water and it’s just a rush; a feel of freedom. If I’m having a bad day or during the offseason, I just jump in my boat and go for a ride. Either way I guess you got to run from your troubles on a boat.”

Racing away from his troubles, or just racing in general, is not the only thing Haynesworth does with his boats. He is also a very talented designer for the custom paint jobs he emblazons on his speedy vessels. In fact, his custom paint jobs and artwork that decorates his boats have gotten him attention wherever he goes and he’s even received awards for this hobby.

“[On] past boats I’ve gotten awards. I had last year, a red boat, it was called Hell Razor. It had flames all over it, it had skulls, burning skulls; it was pretty wicked. Everyone was like it’s crazy, it’s crazy.”

“In July of last year, I sold that boat and started a new project, a 48’ MTI. When you see the pictures, it’s pretty intense, it’s pretty crazy. Everyone is like, ‘Oh my God. That’s your boat? How the hell is he going to get any crazier?’ It’s like you just one-upped yourself. I guess that just means I’m in a league of my own.”

Boating isn’t Haynesworth’s only passion outside of his football life, he is also known for his involvement in real estate and designing his own luxury homes. The influence of places he has traveled and visited has become the source of this creative outlet.

“I love homes, I traveled a bit; the Bahamas, Jamaica, Aruba, Mexico, you know places like that. I’m always into homes, as far as just seeing them, luxury homes, high-dollar estates, I just check it out, I don’t know why. The way you’re living you just want to be comfortable. You want to just have everything you want in your house. I get some cool ideas from magazines and from looking at homes and being in hotels. Right now I’m designing my house for two years, the one I’m going to build in Knoxville.”

You may be thinking at this point that you had no idea that Haynesworth was this diverse in what he did off the field. Prepare to have your mind blown. Haynesworth is also getting his hands on all kinds of business ventures, for example, did I mention he’s anticipating having the largest motorcycle showroom in the state of Tennessee?

“I have a motorcycle dealership that we’re opening up. Actually, three of them are up and running but what were going to do is combine with another guy and we’re going to actually sell every brand of motorcycle. Ducati, Harley, BMW, Victory, Kawasaki, Yamaha, Hondas, you name it, were going to sell it. Our dealership, our showroom, is going to be 51,000 square feet, the largest dealership in Tennessee. It’s going to be a cool thing.”

The business aspect of Haynesworth does not cease there. In addition to motorcycles, he is also involved in audio and visual technology. In fact, his very alma mater has him to thank for a large piece of technology.

“I also have an A/V company that does smart-house technology and also fiber optics for commercial. One of our big jobs that people would know about is we put up the U.T. Jumbotron, the new one, that was our company that did that. It’s good stuff, I like technology.”

Perhaps the most exciting and interesting business venture is a website Haynesworth is creating where regular, everyday athletes can learn how to train like the professionals they emulate in hopes of being as skilled as they are.

“I think it could be one of the largest internet companies in the world, literally. What I’m creating right now is TrainLikeThePro.com. ‘Train Like The Pro’ is a website where we have the top athletes in every sport come on, you can subscribe to whatever athlete, whoever you want to see for like 20 bucks a month and they’re going to basically give you their tips on how they got good. Workout tips, mindset, playing in a game, understanding coverage. Things to look for, things to get your game up to par. For high school kids, even young kids, college kids, all that stuff. Its’ going to be great, we’re getting top athletes in every sport to do this, and the athletes, they get a large portion, a majority of the money. They’re kind of at your disposal .There’s nowhere in the world or in the internet where you can talk to Tiger Woods or Albert Pujols, Peyton Manning or Floyd Mayweather at one time. It’s going to be a crazy site, we’re working on that right now, we have it copyrighted, we have it patented and we actually have a teaser at TrainLikeThePro.com.”

Using this very smart and useful website as a segue because I am sure your brain is being overloaded with the sheer amount of things Haynesworth is involved with, we will delve into the most well-known skill set of his – football.