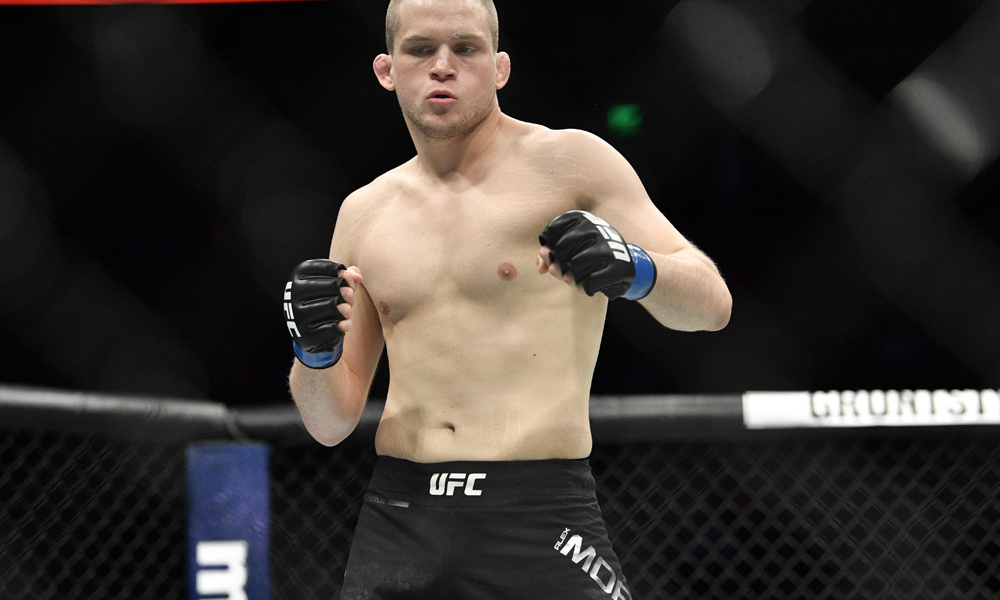 Alex Morono is set to make his eleventh UFC appearance this Saturday when he takes on Rhys McKee. ‘The Great White’ is planning to lean on his octagon experience to secure his seventh UFC victory.

“I just remember what it was like (to be a young prospect),” Morono replied. “My opponent hasn’t been the distance in the UFC yet. He only has like three minutes of octagon time, so this is one of those fights where the longer it goes, the better I think it’ll go for me.”

Morono noted his extensive UFC experience and why that will be key this Saturday.

“I’ve got a couple hours of experience in the octagon so I’m looking to kind of drag this one out. Instead of going for any one finish, I’m gonna look to do as much damage as possible and test the metal of this youngster. It’s kind of nice being on the other side,” he chuckled.

Alex Morono isn’t one to predict a first round knockout every time he competes. Instead, he takes a more calculated path heading into each fight.

“I don’t really have any super expectations. I just plan for a third round knockout. I always try to plan to get the finish on the feet. I think he knows that too, so this should be a pretty fun fight. I want to plan that it goes past the first two rounds in case it doesn’t, but mostly I just want to enjoy the time in the cage.”

Spoken like a true fighter. The Texas native thoroughly enjoys fighting and showcasing his skills to the world. As he continues to have more and more success, he must adjust his goals.

“Making it to 10 fights was my first goal. Making it to 20 fights is my new goal,” he asserted. “Another goal of mine is to get finishes that have never been done before and just be a reliable fighter.”

He awarded high praise to UFC welterweight contender Geoff Neal, who trains with him at Fortis MMA in Dallas, Texas.

“Geoff Neal, my training partner, he’ll be champion one day. That is an awesome path for our gym and for him.”

Many notable UFC/MMA fighters train alongside Morono at Fortis MMA; including Abdul Razak Alhassan who will be competing this Saturday at UFC Vegas 14 also.

Morono is hoping that him and his teammates collect wins this week and end 2020 on a positive note.

“I’m really looking forward to having some good news for the end of the year. That’s the plan and at home I’ve got some cool stuff at the gym that I’m gonna get going too.”

Before the interview concluded, Morono made sure to thank all of those who have helped him along this journey.

“To my team at Fortis (MMA), you guys are the best. My coaches have helped me very much so. To all my students back in Houston, I’ve got some really cool stuff in the works and I can’t wait to get home and get the gym back on track, and make it better than ever.”

Make sure to watch Alex Morono take on Rhys McKee this Saturday at UFC Vegas 14 on ESPN+.