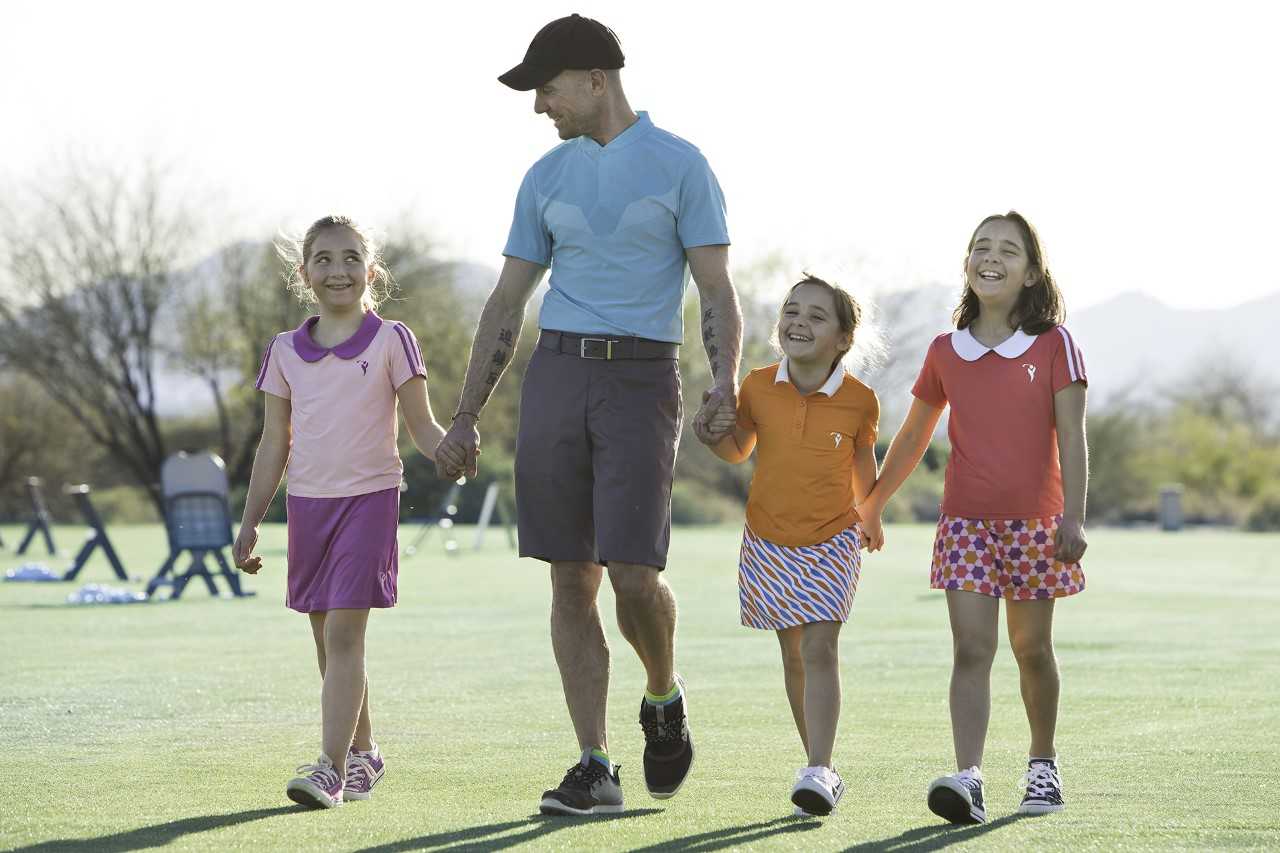 What began as creating an experience with his own family has developed into an eagerness to share. The line’s draw is its amusing colors and patterns, coupled with affordability, encouraging everyone to play. “My philosophy has always been why spend a lot of money on materialistic things, when I can use that money for the greater good, and impact society.”

Petinga wanted to offer a unique solution for an underserved market. By partnering with The First Tee, an organization with initiatives in all 50 states, both organizations work to help youth have fun on the course, as well as grow the game. Driven by philanthropy, Wynnr, will also be donating 50% of the profits to providing young people from underserved and underrepresented communities with access to superior educational opportunities. In addition to a minimum of $25,000 in donations to The First Tee. All while simultaneously abiding by country club dress codes and individuality.

As a parent, Petinga understands the short-lived cycle of youth apparel. “The clothes only last a season because your kids grow. So, to spend that much money for such a short period of time to be able to have usage out of it doesn’t make a lot of sense, from a parent as well as from an entrepreneur. There’s a whole other issue with clothes, and fast fashion that I think is part of the problem as well. We’re creating behaviors that are detrimental to society in general, as well as to the environment.”

Moreover, the experience on a course can be seen as one of bonding. “We spend countless hours, just goofing around, learning the sport, getting to know each other, and forming that close bond.” Active in gymnastics and dance as well, Petinga’s three daughters, ages eight and six, are still be able to be youthful, landing their flips on the course in vibrantly patterned skorts.

The game lends itself to teaching opportunities as well, Petinga describes. “Part of it is we no longer teach our kids etiquette any more, to say please and thank you and to have manners. Golf is a little bit historical when it comes to some of that, it’s not like going back in time but we’re teaching values that are important to our youth, and those youth will eventually become the adults of the future. “

As a cancer survivor, who still receives treatment every two months, Petinga employs the mindset that there’s “nothing like the present.”

“And in today’s age and time, where so many kids are preoccupied with their own lives, but also with technology. I wanted the ability to spend real quality time with them, right here right now, because I don’t know what’s going to happen to me tomorrow.”

Another point Petinga emphasizes is transparency. Whether it’s being transparent with his children concerning his health, or to his consumers, regarding the creation of the line. Abandoning the mindsets of corporate greed that manufacturers who top the industry, Petinga hopes to set an example.

“Everything I do comes down to transparency, I mean how many manufacturers do you know show the company that they’re using to produce goods.”

Wynnr explicitly lists Ruby Fashion Company Limited as their manufacturers. “When you’re creating a product that takes the moral high ground, you want a partner whose mission

Alongside his daughters and wife Alea, Petinga spent 4 months with no prior design experience creating the vibrantly colored golf line. “They were involved from the get go, from pattern selection, to colors, to fittings. So, for all of us to be involved in it from the ideation of such an idea to a year later it being in marketplace, is truly phenomenal. My daughters wear it to school, and get super excited about it. But they know what it means too, even the name, we’re all winners. To understand that, and sort of to understand why we’re all winners, it’s just not that we always need to win, it’s so much beyond that. It’s we have the opportunity to do whatever we want, to be whatever we want, to change the world, and it all starts with you. “