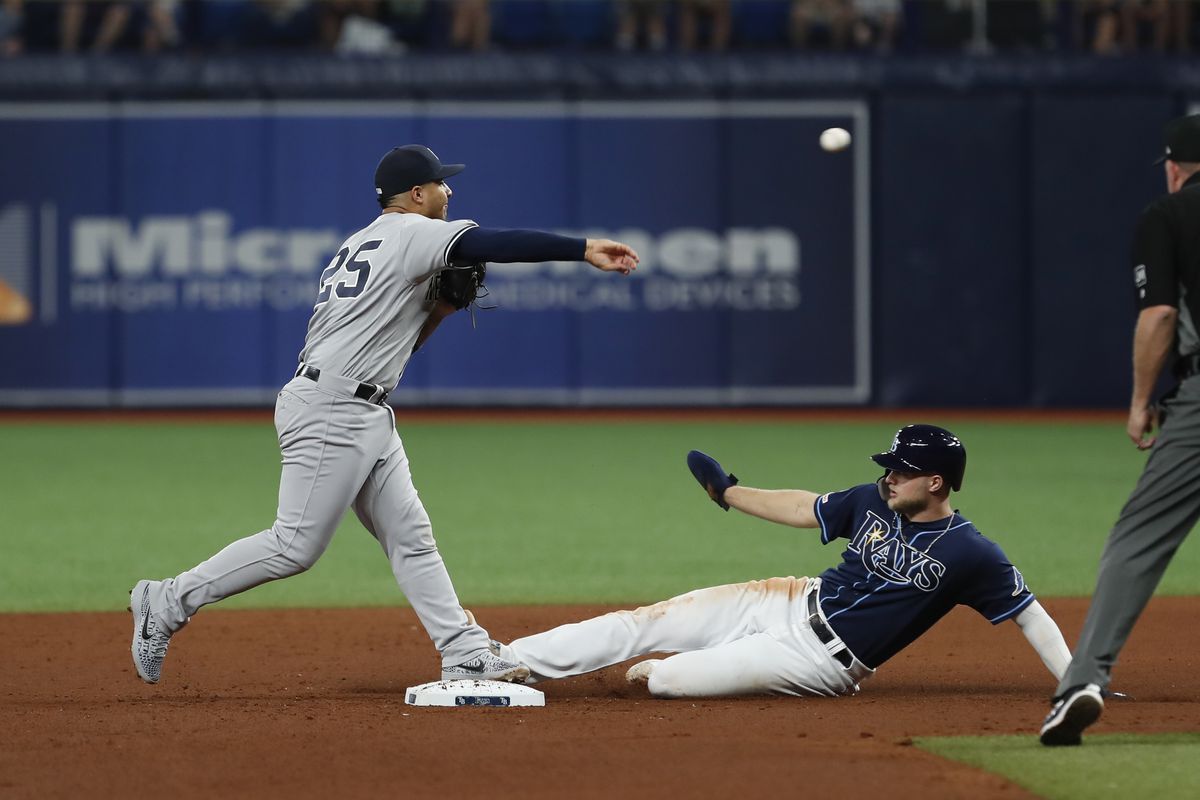 The competitive landscape of the MLB is more polarized than ever before. On one side of the spectrum we have several super-teams poised to win 100-plus games and contend for the World Series. At the other end we see rosters better suited for the minor leagues and ready to push 100-plus losses. The middle ground still exists but it’s shrunken from years past. The AL East is the perfect microcosm of this trend, raining all the way from arguably the league’s best team to arguably the worst. Here’s my breakdown and prediction of what’s in store for the division in 2020.

This one is a no-brainer. They added perhaps the best pitcher in baseball to a team that already won 103 games last season. Starting pitching was always the one chink in the armor for New York, but Gerrit Cole is a dominant ace with nasty stuff. Cole’s presence at the top of that rotation suddenly makes it look a heck of a lot stronger. Maybe it takes a little pressure off of Luis Severino too as he looks to bounce back from an injury riddled 2019 campaign in which he managed to pitch only 12 innings.

Severino was merely the tip of the iceberg when it came to the Yankees’ injury luck last season. Slugging outfielder and former MVP Giancarlo Stanton managed to play a mere 18 regular season games while playing sparingly in the team’s postseason run. Aaron Judge played only 102 games after playing 112 the season before. Gary Sanchez missed time with a lingering groin injury. When all was said and done, a record 29 different Yankees players landed on the injured list at some point in 2019. If a team that banged up could manage to win 103 games, imagine what they can do if they stay healthy on top of adding Gerrit Cole.

At some point we can go ahead and just assume that Giancarlo Stanton is going to miss some time. That makes it all the more imperative that the team’s other star slugging outfielder remains on the field. Judge has shown that he has as much power in his bat as anybody in the game. His batted ball profile jumps off the page, routinely producing league-leading exit velocity and barrel %. The skills are undeniable, but is the same lumbering frame that gives Judge his trademark power also making him more prone to injury?

Year after year it seems that the Rays outperform their expectations. As a small market team, they routinely have one of the smallest payrolls in the game, yet they still always remain competitive. The whole truly is greater than the sum of the parts with this franchise. A lineup featuring Austin Meadows, Hunter Renfroe, Yandy Diaz, Jose Martinez, Brandon Lowe, and Ji-Man Choi is good, but not great. Honestly, it’s almost kind of a band of misfits, a collection of cheap and underrated pieces that combine to form a surprisingly effective unit. Manager Kevin Cash is among the best in the league at shuffling his lineup to capitalize on favorable matchups, which really helps with getting the most out of this rag-tag army of hitters.

The pitching rotation is the sports car to the lineup’s pickup truck. Former Cy Young winner Blake Snell leads the pack for a three-headed monster also featuring Charlie Morton and Tyler Glassnow. Morton finished third in Cy Young voting last season with a 3.05 ERA, 240 strikeouts and 16 wins. Glassnow boasted the best ERA in baseball at just over 1.00 last season before missing several months to forearm tightness. While Snell’s season ERA of 4.29 may be unsightly, the underlying statistics show that he was pretty unlucky, and injuries likely hurt his performance as well. Yonny Chirinos and Ryan Yarbrough were both positive surprises in 2019, so much so that the two openers may be used more as traditional starters moving forward. The bullpen is dominant, with relievers combining for a league best 3.71 ERA last season.

Big Question: Can Austin Meadows follow up on his breakout 2019 season?

With so many moving pieces in the Rays’ lineup, they need somebody to step up and be an anchor. Last season that was Meadows with 33 home runs, a .291 batting average and a .922 OPS. The power explosion was unexpected, but Tampa Bay is hoping that it’s repeatable. Pitching will keep this team in games, but they’ll need an elite run producer to put them over the top and in the playoffs.

With the post-Mookie era upon us, Boston appears to be headed towards retooling, if not a full blown rebuild. Alex Verdugo is an intriguing addition to the top of the lineup, but he’s got his work cut out for him in replacing former MVP Mookie Betts. Despite trading their best player to the Los Angeles Dodgers, the Red Sox still have a strong lineup capable of putting up a lot of runs. Rafael Devers, Xander Bogarts, and J.D. Martinez make up a heart of the order as good as any in baseball. Michael Chavis, and Andrew Benintendi are two more young players who could take steps forward and make this lineup even more formidable. This roster still very much looks like a playoff team but they’re certainly trending in the wrong direction. If Boston opens up the year poorly, we may see even more pieces moved as we near the trade deadline.

The starting rotation would greatly benefit from a bounce back by ace Chris Sale. The lefty starter suffered a hugely disappointing 2019 season in which he posted a career-high 4.40 ERA. With David Price being shipped out to Los Angeles as part of the Betts deal and Rick Porcello signing with the New York Mets, the back end of the rotation starts to look a little shaky. Eduardo Rodriguez and Nathan Eovalidi are going to have to pitch well if this team is going to compete. The bullpen received a lot of the blame for last year’s disappointing result, but their struggles were a little overstated. Red Sox relievers finished 2019 right in the middle of the pack with a collective 4.40 ERA, the 17th best mark in baseball.

Big Question: Can the team start hot?There’s a lot hinging on the first couple of months of the season for Boston. How they break out of the gate could go a long way in determining the team’s trajectory for the next couple years. If last year’s struggles carry over or worsen, they’ll likely be sellers at the deadline and could begin aggressively moving closer to a rebuild. However, if they start strong, one could argue that this team is just a move or two away from being able to compete for a playoff position. It really could go either way for Boston and they’ll certainly be an important team to focus on at the beginning of the year.

They’re not the best team in the division, and they may not even be top three, but there’s a case to be made that they are the most exciting team. That’s largely due to their crop of talented young hitters, most of whom are second generation MLB players. Vlad Guerrero Jr. is the most hyped of that bunch. His huge minor league numbers (.331 batting average, .945 OPS)  made him one of the highest ranked prospects in all of baseball before his debut last season. He struggled to adjust to MLB pitching, but the talent was still apparent in flashes, such as his jaw-dropping performance at the home run derby. Lourdes Gurriel Jr., Bo Bichette and Cavan Biggio are the other young up and comers to watch for in Toronto.

Pitching was a pretty glaring weakness for Toronto last season. Blue Jays pitchers combined for a 4.79 ERA, the 10th worst mark in all of baseball.  That explains why they went out and signed NL Cy young runner up Hyun-Jin Ryu. Ryu enjoyed a major breakout season with the Dodgers last season and now projects to be the ace in Toronto. After him the rotation is shaky at best. Chase Anderson could be decent (3.94 career ERA) and maybe Tanner Roark can turn back the clock to the ace-like form he showed years ago in Washington. As a whole, their staff is likely to give up a lot of runs, which may put more pressure on their young bats than they’re prepared to handle.

Big Question: will the real Vlad Jr. please stand up?

While the Blue Jays could surprise people in 2020, the real concern for this season is establishing a core to move forward with for years to come. Vlad Jr. is supposed to be the epicenter of that core. For him to be the foundational piece Toronto needs, he’s going to have to be more productive at the plate. He’s still young, and most of us expect him to be a star, but he’s got something to prove this year. The success of this year’s team is much more about how Vlad and the other young hitters develop, rather than how many games are won.

The Orioles have all the youth of the Blue Jays, but a fraction of the potential. Still in the early stages of what looks to be a grueling rebuild, the Orioles simply don’t have very much MLB level talent on their roster. Trey Mancini and Renato Nunez had productive 2019 campaigns and do give fans something positive to see, although a far cry from inspiring playoff hopes. A hitter-friendly home park in Camden Yards is the best thing this offense has going for them, unfortunately opposing teams get to hit there too.

To describe the O’s pitching staff in a word: abysmal. Honorable mention: hopeless. After shattering the record for the most home runs allowed in a season, Baltimore’s pitching staff looks to be just as bad for 2020. If you squint really hard you can almost see some upside in John Means and Asher Wojciechowski but they’re back end of the rotation starters on just about any other team.

Big Question: When will help arrive?

After a couple seasons of not even attempting to put together a good major league club, surely the Orioles must be stockpiling some talented prospects, right? With no hope of contending in 2020, or perhaps for a couple seasons thereafter, there’s no reason to rush guys up to the majors. It will be interesting to see when the tanking finally pays off in Baltimore. With no lottery system in the MLB draft, teams like Baltimore are rewarded with top draft picks for their awful play. The O’s farm system holds four of baseball’s top 100 prospects in Adley Rutschman, the #1 overall pick in last year’s draft, Grayson Rodriguez, Ryan Mountcastle, and D.L. Hall.