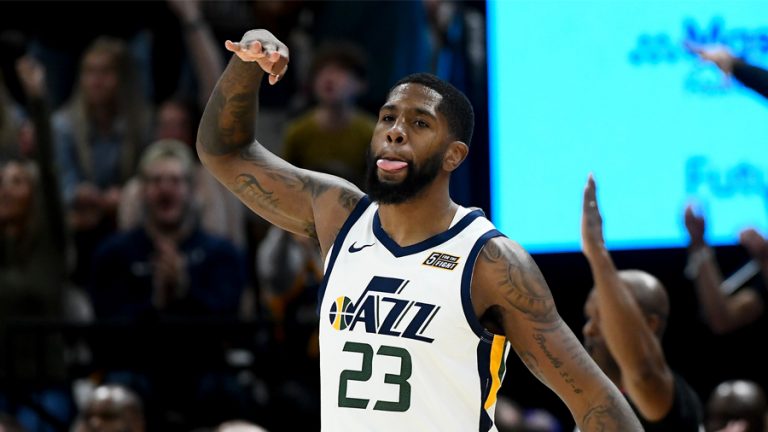 The Utah Jazz have added another name to a growing list of development success stories for the franchise by agreeing to a four-year $36 million extension with forward Royce O’Neale. The Jazz first discovered the forward during his time at Baylor playing with Jazz executive vice president of basketball operations Dennis Lindsey’s son. After going undrafted and spending two years overseas, Royce was invited to a free agent mini-camp where he impressed and earned an invite to training camp and eventually a contract.

O’Neale quickly made a name for himself with the Jazz with his work ethic, hustle plays, and tough defense. The forward found himself playing big minutes as a rookie along with Donovan Mitchell, including a three and D role matching up against James Harden, Russell Westbrook, and Paul George in the playoffs. With his role continuing to grow with the Jazz, O’Neale is playing the most minutes of his career with 30 per game and is averaging 6.2 points while shooting over 44 percent from three.

Set to become a restricted free agent this offseason, the Jazz have locked O’Neale up as part of their young core with this extension.

“Re-signing Royce to a long-term extension was a priority for our organization,” said Dennis Lindsey, Jazz executive vice president of basketball operations. “Royce is an elite defender and has really shown the ability to spread the floor with his shooting. We feel he brings a versatility to our team that’s vital to our success. We’re happy that we were able to retain not only a great player in Royce, but also a tremendous person.”

The Jazz have continued to prove they have a plan in place for the direction of the franchise and success moving forward. Of this direction Dennis Lindsey said

“We were pretty confident in what Royce could do. But we didn’t want to invest in the team if we were gonna have an average group. So he had to be patient for us to figure out the team first.”

Signing Royce O’Neale to an extension allows him to focus on the season at hand without having to worry about free agency. It also gives a vote of confidence in him and their ability to develop young players, something they are hoping to continue with players like Rayjon Tucker, Jarrell Brantley, Miye Oni, Juwan Morgan, and Tony Bradley Jr.