Antonio Brown gets suspended! What now? 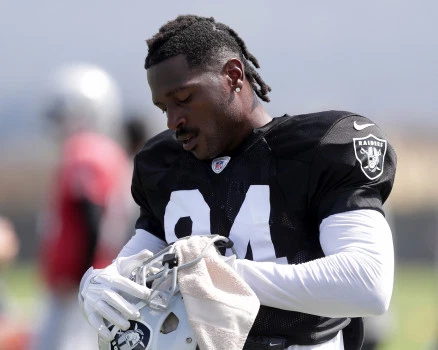 Oh boy! Here we go! On Wednesday, September 4th, 2019, Oakland Raiders wide receiver Antonio Brown and General Manager Mike Mayock got into a heated confrontation. This was due to the fact that Brown posted confidential information regarding team fines on Instagram. There was a screaming match, and Brown threatened Mayock saying he’d hit him in the face before punting the ball and begging Mike Mayock to fine him. He then took it up a notch, rifling balls at practice and taking plays off, an unusual sight for arguably the hardest working receiver in football. He was spotted yelling at a strength/conditioning coach, and the ultimate millennial move: he unfollowed the Raiders and Derek Carr on Instagram.

The Raiders are now planning to suspend their star receiver. They’re already planning to be without Brown week one. However, it’s unclear whether they’re suspending him or simply declaring him inactive. And that’s actually really important! Why? If they suspend him week one, they could void all his guaranteed money and cut him outright!

It’s safe to say that Antonio Brown might be a bit mercurial. It’s been a crazy offseason for the Raiders: they traded a fifth and a third round pick to acquire Brown from the Pittsburgh Steelers, after which they made him the highest paid receiver in the league. Many believed the Raiders had basically committed highway robbery in paying relatively little for one of the best receivers in the game. When we was with the Steelers, he had problems with quarterback Ben Roethlisburger – aka Big Ben – and head coach Mike Tomlin. It was fair to assume Big Ben was at fault. And yet, since the moment Brown arrived in Oakland, he’s been nothing but volatile. He had a cryotherapy mishap early on, showing up to training camp with frostbite on his feet. He threw a tantrum over a helmet. He attempted to throw shade at former teammates Big Ben and wide receiver Juju Smith-Schuster, telling the former to “shut up” and “keep your emotions off the Internet” to the latter, and he finds new ways to make himself look bad.

As of now, it’s unclear what Antonio Brown’s future will be. His own agent, Drew Rosenhaus, doesn’t even know. He now has the unenviable duty of convincing an NFL team that Brown is worth the headache. There is now a very real chance Brown misses multiple games, and he might never suit up for the Raiders. He could end up on another team in the blink of an eye. He’s threatened to retire, and now the question is: will Antonio Brown play a down for the Raiders? If he’s suspended week one, his time with the organization is probably over, and he’ll be in another uniform soon enough.