Are The Lightning Actually Better Without Steven Stamkos? 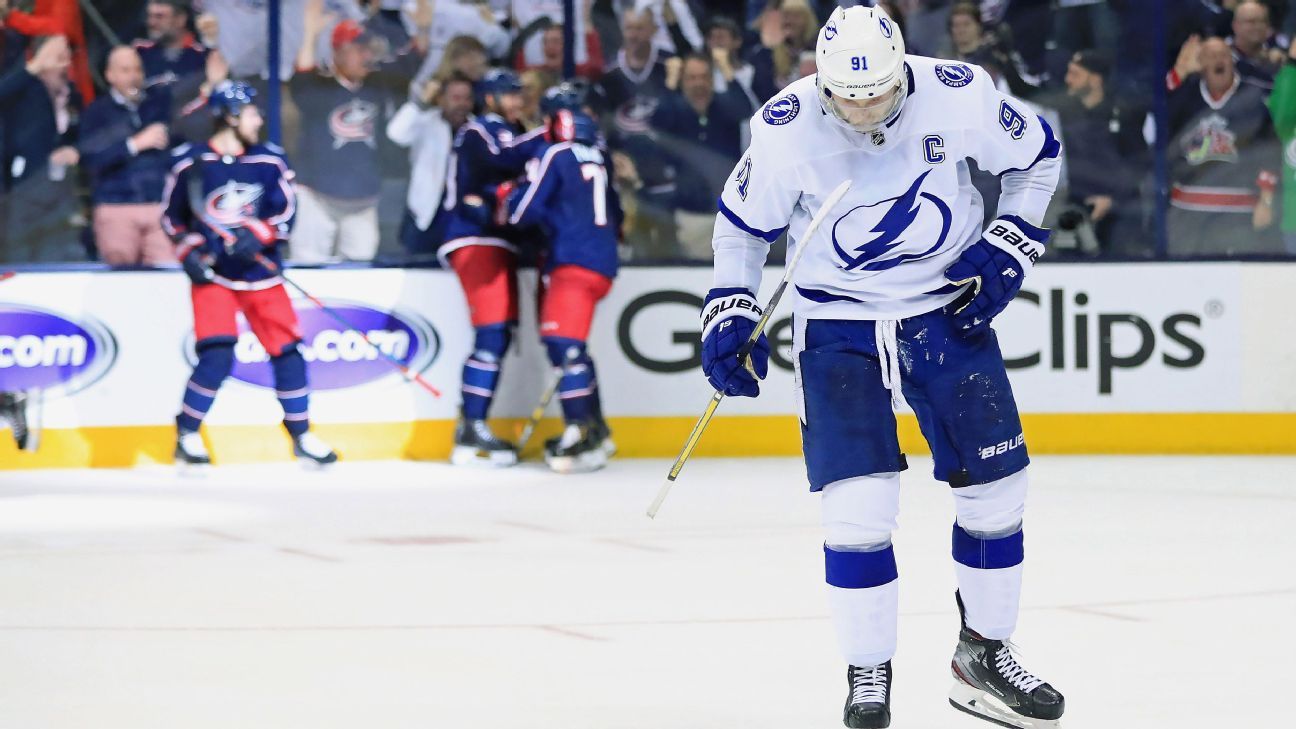 The Tampa Bay Lightning are now fresh off a Game 1 drubbing of the New York Islanders. This just a few days removed from dispatching the Boston Bruins in five games. Yes two of the games went to overtime, and yes had the Bruins won even one of those, the series could have gone quite differently. The fact remains that without Steven Stamkos, the consensus best player and team captain, the Lightning have managed to do twice already, something they couldn’t do at all last season, advance in the playoffs.

The Lightning were unceremoniously bounced from the 2019 NHL Playoffs in four straight games. This after a Tampa regular season that was a historic one for the franchise. The team won its first ever Presidents Trophy, clinching first place overall in near record time. The Lightning needed only 73 games to earn home ice advantage throughout the playoffs. Only the 1995-96 Detroit Red Wings did it quicker at 71 games respectively. The Lightning also tied the all time wins record in a season with 62, but fell just four short of the overall points record with 128. Then the playoffs hit and it all ended seemingly before it got started.

The Lightning blew a Game 1, 3-0 lead to the Columbus Blue Jackets losing it 4-3 and the rest was history. Tampa played most of the series on their heels and noticeably crumbled quite easily when the Blue Jackets turned up the pressure on the forecheck. Now losing Victor Hedman in Game 2, as well as not having Anton Stralman at any point in the series absolutely took a toll. Hedman and Stralman were tasked to move the puck out of the defensive zone quickly, setting up the counter attack that killed teams all season. Without either of those players for most of the series, the difference in the Lightning was quite noticeable on both ends of the ice.

As we all know in hockey, injuries happen pretty often and the teams that have the resolve and the depth to overcome them are the ones that usually hoist old Lord Stanley’s fabled chalice. It’s not as if the Lightning have been completely unscathed either. From time to time during this year’s playoffs, the Lightning have had to play without the likes of Ryan McDonagh, a solid top four defenseman and alternate captain. Nikita Kutcherov, the team leader in every offensive category this season and last year’s Hart Trophy winner for league MVP has also missed time. Throw in the loss of Stamkos and that’s some real adversity for any team to have to push through, but push through they have.

So the question remains, why has this team remained steadfast when last year’s team fell apart so easily? One reason is the masterful offseason by Lightning GM Julien BriseBois. The main issue with the Lightning, which became abundantly clear against Columbus, was the lack of grit. So replacing some real productive players with some grinders was priority one this past offseason.

Jettisoned were key contributors Stralman and J.T Miller along with aging vets Ryan Callahan and Dan Girardi. In their place became proven performer and agitator Patrick Maroon, solid two way defenseman Kevin Shattenkirk and the physical and dependable defenseman Luke Schenn. Not only did these moves add some much needed sand paper to the lineup, but also freed up much needed cap space to aid in the effort to keep budding star Brayden Point.

Another, and more important reason is that the Lightning’s best players are actually playing like it. Kucherov and Point led the team in scoring in the regular season and have continued to do just that. Point has actually edged out Kucherov thus far with 18 points on six goals and 12 assists, to 16 points on four goals and 12 assists for Kucherov. Hedman continues to be arguably the best defenseman in the playoffs with nine points while leading the team in the +/- category with a plus 11. Ondrej Palat has also been an important goal scorer especially in the last series. Palat took a bit longer to get going but absolutely torched the Bruins with five goals in five games. Unexpected but welcome contributions from Blake Coleman and Yanni Gourde to go along with the steady production of Alex Killorn have also been key factors.

This brings us back to Stamkos. All of the players above are not only contributing offensively but are all in the plus category in the all important +/- stat, except for Killorn at minus 2. For those that aren’t sure what that means, it’s simply this. A player receives a plus 1 for every goal he’s on the ice for when his team scores. The opposite occurs when the player is on the ice when the other team scores. Players who are defensively responsible, especially in their own zone, usually come out on the plus side which obviously contributes greatly to the team winning consistently.

Stamkos has only two playoff runs where he was a plus player, plus one in four games in 2014, and plus two in 26 games the next season. For his career Stamkos is a minus 12 in the six playoff seasons he’s played. You don’t have to be a mathematical genius to figure out that if the other team’s top line consistently outscores yours, you have a difficult time winning playoff games.

Kucherov is the other main cog in the Lightning offensive machine. The Russian born RW is actually considered by most to be the best all around offensive threat the Lightning have on the roster and who could argue with it? Since his rookie season in 2013/14, Kucherov has led the team in points during the regular season four times. He has then gone on to keep the production going when it matters most, the post season.

Throwing out last year’s debacle and his rookie season, Kucherov has either led the team or finished second in points in every other playoff season. One of the years finishing off the team lead was his second year in the league ending up just behind Tyler Johnson’s blistering 23 point pace at 22 points. Stamkos does take key faceoffs and plays on the penalty kill, but is primarily asked to score goals. With three seasons topping 40 goals to go with one season each topping 50 and 60 goals, he has done that adeptly during the regular season. Nonetheless, unlike Kucherov in the playoffs, Stamkos has come up a bit short holding up his end of the offensive load.

Since joining the club during the 2008/9 campaign, Stamkos has led the team in goals seven times during the regular season. That has translated into never leading the club in goals outright in any playoff season. To be fair, aside from last season where nobody on the team had more than a goal each, he has co-led on two occasions. In the 2017/18, he co-led with seven goals helping the team reach the Eastern Conference Finals, losing in seven games to the eventual Stanley Cup winner, the Washington Capitals. The other was the 2013/14 season, where he co-led with a two goal effort before being swept out of the first round by the Montreal Canadiens.

The Tampa Bay Lightning have shown to be a tough, resilient and opportunistic team thus far in these wacky playoffs. These very same traits were strikingly absent in the club last season. So one must ask the question of if the solid postseason play is because of or due to the absence of Stamkos. Maybe the team is playing such inspired hockey to “win one for the Stammer.” By all accounts, he is well liked and respected by all in the organization, especially his teammates. To me, however, it reflects more on the fact that hockey teams only go as far as their best players will take them. This season the team is led by Point and Kucherov along with Hedman and starting goalie Andrie Vasilevkiy and the team is playing like it.