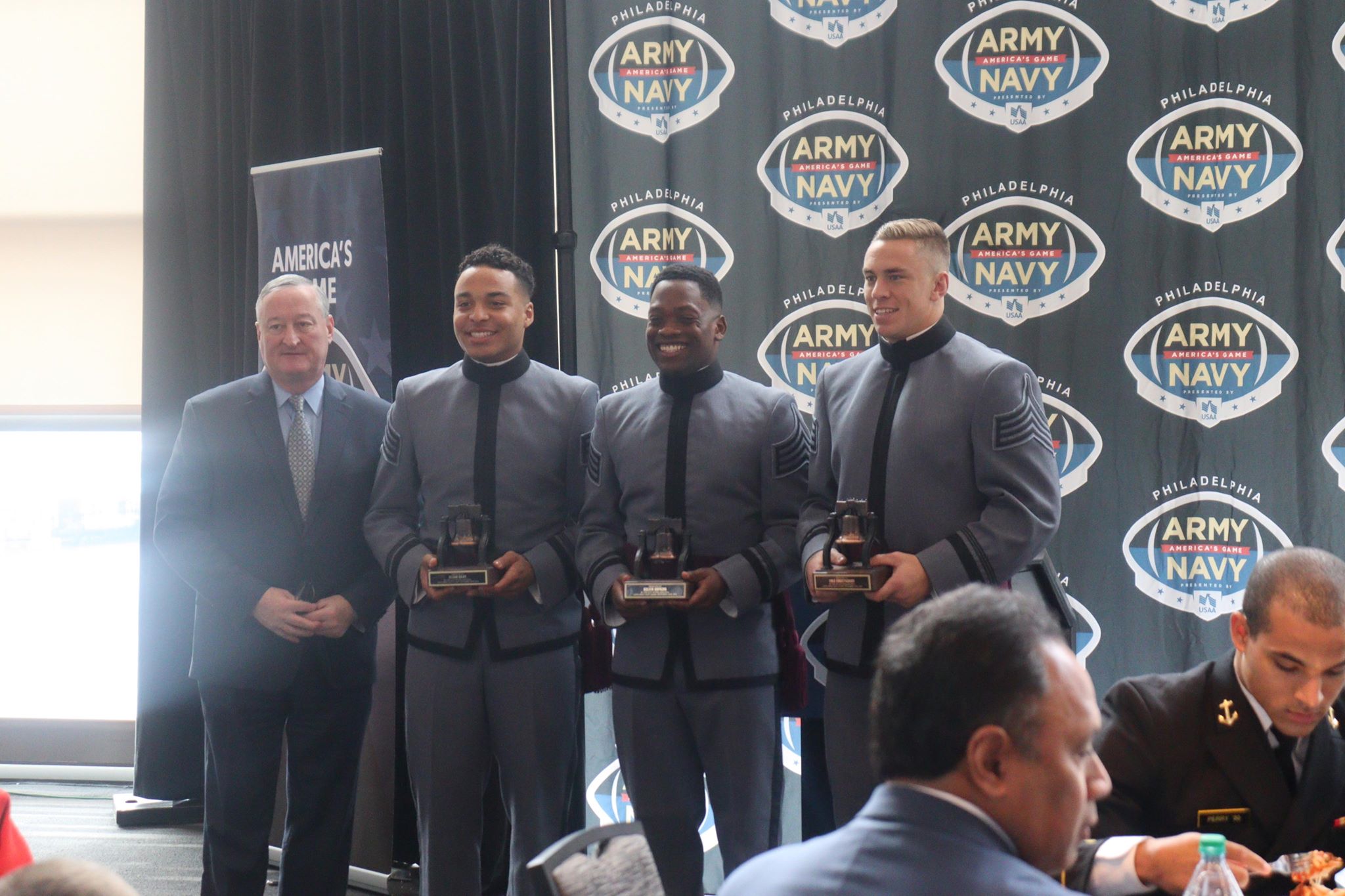 The senior team captains are gearing up towards their final Army vs Navy football game. This is the rivalry’s 120th game and the players are hungry for their final win. Back Sports Page recently spoke with both teams’ captains at the Army-Navy Luncheon in Philadelphia. We discussed not only their preparation for the legendary December 14th game, but their lessons throughout the course of their time with the Army or Navy.

Navy senior Nizaire Cromartie started his season at the raider (60% outside linebacker and 40% defensive end position) and the team’s choice for captain. Three-time letterwinner, Cromartie hashes how he faced adversity and how to navigate group unity. When asked about his toughest lesson in all four seasons, he states,

“Last year, there needed to be some type of cohesion between the group of players to actually execute,” said Cromartie. “The worst part about it is when we lost ten games, that was one of the hardest things…seeing things not come together. The idea of having everyone on the same page. Having a family-oriented group of guys, not having that was the biggest lesson”

“Being 3-10, to me that was embarrassing,” said the Navy team captain.  “Especially when a lot of the game were this close. Some overtime, when for two or the last play. My mom and dad always say it takes a family.

We held a senior class meeting, established the ideals and the society we wanted to have in the locker room and addressed any problems in our senior class, so we can be examples of what we were preaching towards the other guys.”

“I’ve learned very valuable lessons. The most important lesson that I’ve learned, being a good leader is being a good follower. Buying in fully to what the vision of the program. Following that idea and trying to make yourself better person through this vision and goal through that mindset. That starts up top, Coach Ken Niumatalolo, comes down from him and people gravitate towards that and people want to follow you.”

“Knowing what you represent. There is no leader that will tell you it’s black and white. You’re always developing and learning.”

Army’s defensive back, Elijah Riley received three-year letterwinner at Newfield High School under head coach Joe Piccininni. As a high schooler, Riley earned top player in the Suffolk County by Newsday and won the Tom Cassese Award for the top defensive player. He describes his leader experiences and the five straight losing. Riley speaks about the opportunity the Black Knights have to be 4-0 against Navy.

“The hardest thing is maintaining the confidence,” said the Army cadet. “This season we did a great job of doing so. It’s been a tough season lots of adversity. The biggest thing we’ve had to learn all season was how to keep a neutral mindset (in any situation, field, or locker room). Having that five-game losing stretch was hard on a lot of guys myself included. Being one of the leaders on this team, I have to get the charge going. Get the guys in the right direction. We have been pledged by injuries this year.

Army’s Linebacker Cole Christiansen actually grew up on a horse farm on a Navy base. He described football to be his passion. We spoke about his lessons and approach in leadership.

“The biggest leadership lesson is that everyone is different,” said Christiansen.“Everyone is influenced differently with different leadership techniques. And what I learned as a team captain. On the football field, that applies to every aspect of my life. I learned that I’m stronger than I thought I was. (Cadets) think their strong when they come to West Point but there are reservations. (Cadets) don’t know what it’s going to be like. No one knows until you are thrown into the fire of it. It is difficult to do it by yourself. The guys around me are tough and together we can do anything.  Everyone comes to West Point for different reasons. Learn about the person. Learn where they are coming from. That’s the key.”

“It was difficult shocked and proud of the team’s resilience,” said Christiansen. “It’s easy for a lot of people to throw the white flag when that happens. The effort never stopped. There are goals that have to be accomplished. Navy still has to be beaten.”

The Black Knights and the Midshipmen are currently gearing up for the December 14th faceoff. For these players, this will be their final hoorah, however the lessons will live on forever.