For the First Time Since World War II, Army-Navy Will Be Played at West Point 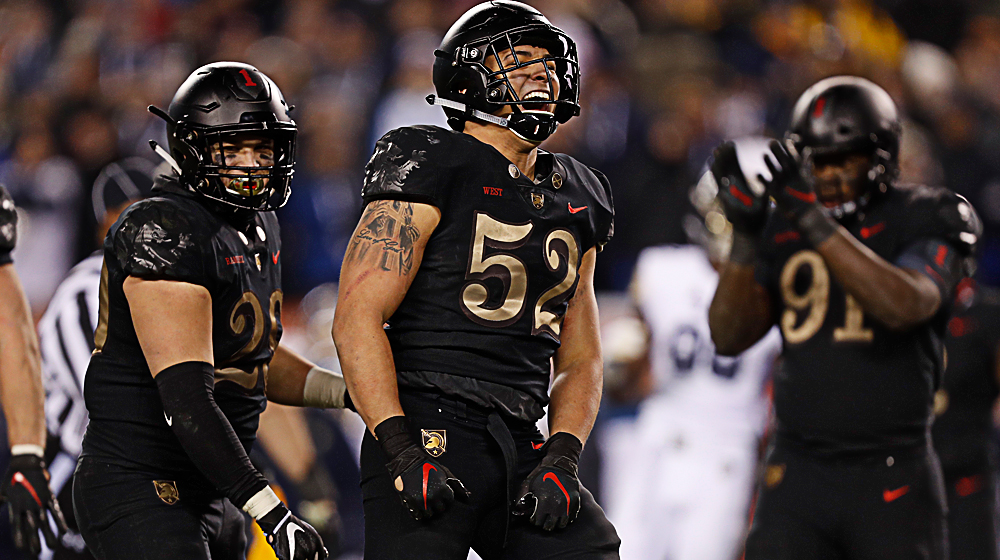 Army vs Navy, the biggest rivalry game of them all. This yearly treat has been played every year since 1930, even though they started the rivalry in 1890. Navy leads the all-time series 61-52-7. Outside of the 1926 meeting in Chicago, and the 1983 clash in Pasadena, California, the game has been held mostly on the east coast. However, with 2020 being such a crazy year, and things are constantly moving around, we get to watch the rivalry game being played at West Point. The last time this rivalry game was played at West Point was during World War II. The game is usually played on the east coast in cities like Philadelphia, the Baltimore-Washington area, and New York.

As one would imagine, a lot of famous faces and names have been a part of this traditional rivalry. For example, Roger Staubach, the great NFL quarterback took part in the Army-Navy rivalry. Doc Blanchard and Pete Dawkins also were part of the game. Dawkins and Blanchard also were also arguably the best backfield tandem to ever play in the rivalry. The Army-Navy game is the final game in the Commander in Chief’s Trophy Series, which also include the Air Force Academy, which is located in Colorado Springs.

This year the country will get a special treat, and the traditional rivalry will be played at West Point Academy in New York. The annual rivalry match-up last took place at West Point during World War II, so this is a once in a lifetime event. This will be the 121st meeting between the two teams.

As for the actual game being played, this should be a tight affair. Navy’s offense is not the same offense we’ve seen the past couple of years. Navy had a three week hiatus to prepare for Memphis and Tulsa, yet still only managed to score 13 points total in those two games. The offense has been a disappointment all year, as they only mustered seven points versus the other Commander in Chief’s participant, Air Force. Navy also opened their season versus BYU, and they were steam rolled 55-3.

If you take a step back and look at all that has happened this year, it seems like the edge in this game will be in Army’s favor, especially since they are playing the game at West Point. Army’s offense revolves around a very good rushing attack, that spreads the carries equally every week. The carries are split between quarterbacks Tuhier Tyler and Christian Anderson. The running backs also distribute the ball evenly between running backs Jakobi Buchannon and Tyrell Robinson. However, when Army gets close to the goal line, they start to hand the ball off to Sandon Mayo, the more powerful running back of the group. Mayo leads the Black Knights with ten rushing touchdowns this year.

On Navy’s sideline, they need to make sure to protect the ball. Army defensive back Jabari Moore, has an interception returned for a touchdown this year, to go along with a fumble recovery touchdown. However, Navy’s offense may be having a down year, but their defense is just a solid as ever. The Midshipman’s defense ranks third in the American Athletic Conference. They allow only 410 yards per game, which is kind of odd as they give up a lot of points per game, 32.

All in all, fans should just be happy that this game is being played this year, with all the sickness going around. As for the game itself, the trend seems to be going Army’s way. However, with that being said, this historic rivalry brings out the best in teams, which could bode well for the Midshipmen. In a game where the ball stays on the ground 85% of the time, Navy could use some trickery to gain momentum. However, it does seem like Army is just better than Navy this year. Army has been much more consistent this year, than their rivals. Final Prediction: Army 27 Navy 24.

On top of all of this, one thing the Army-Navy game is known for is awesome jerseys and football memorabilia. Check out this year’s jerseys and the memorabilia that goes along with it!

If anything, the annual contest between these two military academies, will be a hard fought game. This year’s game will start at 3 PM, at West Point in New York. Navy leads the all time series 61-52-7. They also own the rivalries biggest point margin, beating Army 51-0 in 1973. The longest win streak in the rivalry comes from this century, as Navy won 14 consecutive games from 2002-2015.

Make sure you tune into this game on Saturday. It will be a hard fought match-up with a lot of emotions. One day, the players in the game could be next to each other on the battlefield. So make no mistake, while this game doesn’t have the high ranking participants like Michigan vs Ohio State, or Auburn vs Alabama, it is well worth the watch. The game will take place at 3 PM on Saturday, at West Point New York.