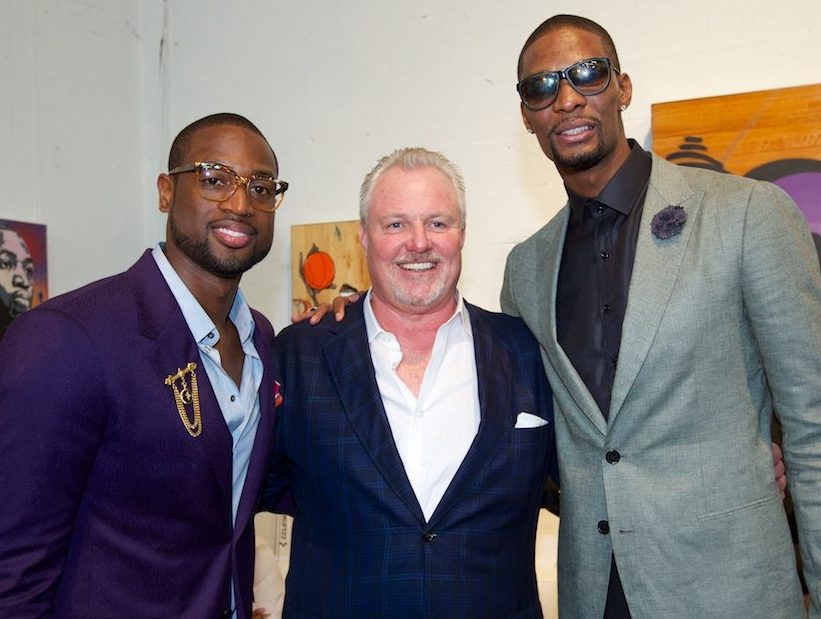 There are still a few days left in December but the holiday gifts came early for hundreds of children in Miami. Thanks to Chris Bosh and Dwyane Wade of the NBA Champion Miami Heat partnering with the Premier Beverage Company, over $32,000 was raised during the “Art of Basketball: Heat Wave”. Bob Drinon, the President and CEO of Premier Beverage Company, personally donated $15,000. Non-profit organizations teamed up with Wade and Bosh off the court to pull together a terrific philanthropic effort to put food on the table for hundreds of families in need during the holidays this season.

The Art of Basketball exhibit was produced by the Public Works Department and curated by Billi Kid. The event featured thousands of dollars of original artwork from street and graffiti artists from all over the world.   Surrounded by street artists inside the Art Basel, it was easy to get the inside scoop on the history and culture of various forms of street art from across the world. Graffiti artists often use their work as an expression of personality using satirical and subversive dark humor to express themselves publically. The artists used NBA backboards and the 2011 NBA All-Star Game floorboards as their canvas to pay homage to the NBA Champion Miami Heat. The Heat weren’t the only team painted on backboards for the event. The Boston Celtics, Kobe Bryant, Blake Griffin and Steve Nash were among other NBA teams and players featured at the exhibit. Artists included Mr. Brainwash, Sofia Maldonado, Ewok One 5MH, URNY, Rene Gagnon, Joe Lurato, The Dude Company, Skewville, Shiro, Cern, Jack Aguire, David Cooper, Cope2, Chris Stain, J. Robles, ECB, Veng, Gaia, Sero, ECB, Peat Wollaeger, Junk, Blanco, and Bill Fickett.

The Art of Basketball truly had the atmosphere and appeal of a Hollywood after-party or a red carpet celebrity event. Live house and hip-hop music from DJ Irie pulsated throughout the art event. More than 200 guests jammed to live music during the VIP After-Party while viewing the original artwork, including Miami Heat owner Micky Arison and team forwards LeBron James, James Jones, and Shane Battier.

Before the fun at the after-party, a red carpet was laid out for Dwyane Wade and his girlfriend, actress Gabrielle Union. Both Wade and Union posed for pictures and answered various questions correlating with the event. While Wade expressed love for the art featured in the exhibit, his favorite artwork remains his children’s personal art hanging in his home. He takes tremendous pride in being a hands-on father and even came out with a book titled “Father First” this year.  Wade also discussed the importance of Wade’s World Foundation, his charitable organization started in 2003 which offers education, family and health service programs to the Chicago and Miami communities

Shortly following Wade, Chris Bosh was joined on the red carpet with his equally stylish wife Adrienne.  Bosh told the media how much he enjoys art and loves taking part in the Art of Basketball event every year. He felt blessed to take place in an event where guests are willing to purchase art with his face on it in the name of charity. Bosh also proudly talked about Team Tomorrow, his non-profit organization which raises support for children in the community

Since Wade and Bosh are both football fans, “Who’s the better team the Dallas Cowboys or Chicago Bears?” was asked on the red carpet. Bosh smiled as Wade chuckled and answered with an emphatic “COM’ ON’ MAN, DA BEARS!” Sticking with the football theme, When asked about his fantasy football team, Wade, who loves fantasy football, put up two fingers and replied with “2nd place man, 2nd place.

I think we can all agree that the Art of Basketball: Heat Wave is a positive way for artists to collaborate with the NBA to raise money for families in need during this holiday season.