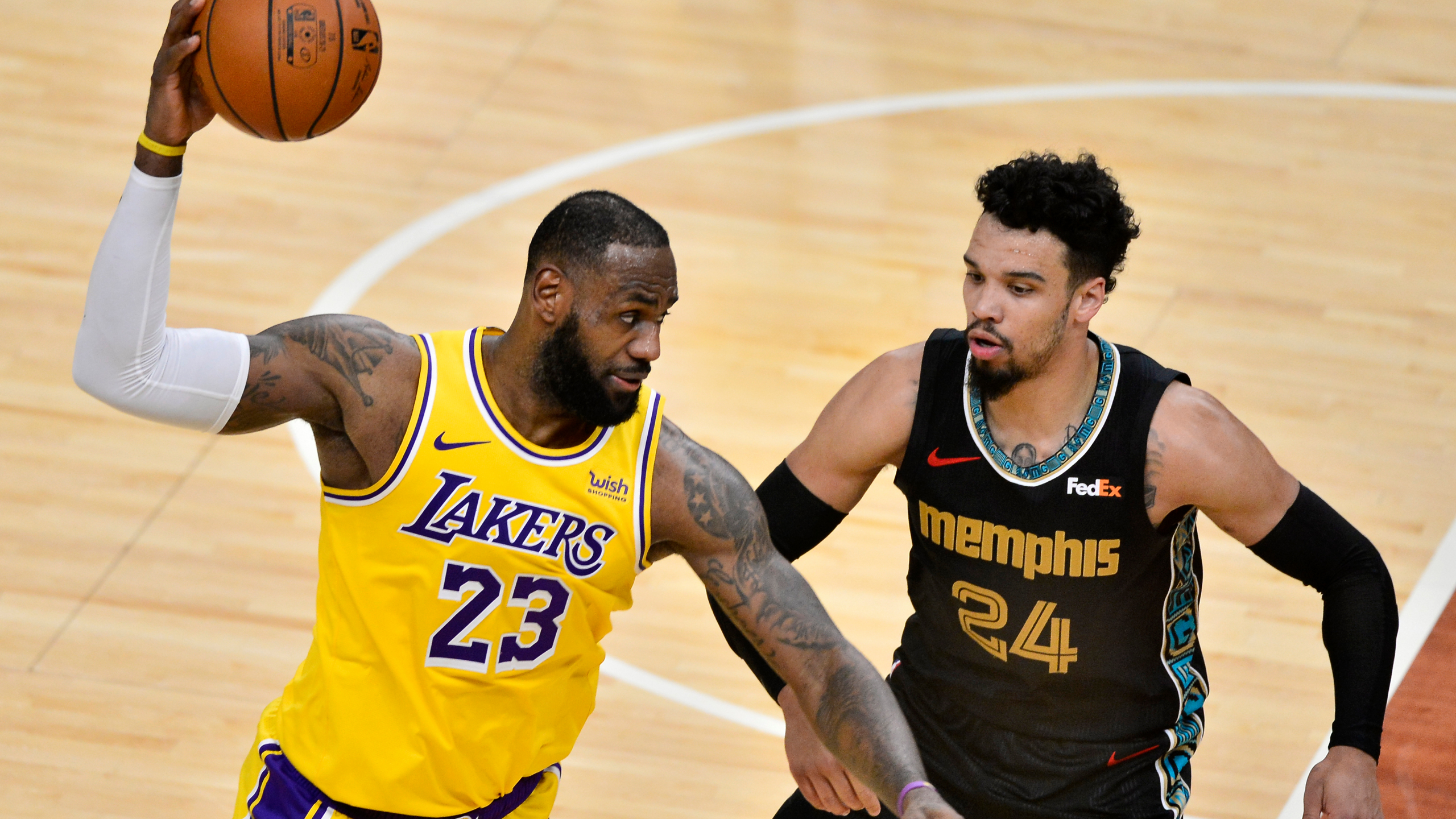 The tumbling dice of the NBA’s final week of the regular season have finally arrived. Given that the league has added four extra teams with a slot at reaching the postseason, it might be accurate to say that this year’s scramble might be the most chaotic in history–that’s not even mentioning that multiple teams have multiple back-to backs left on their schedule, either. To add to the chaos, teams are engaging in historic levels of tanking, players are mutinying on their coaches, and LeBron James is calling for people to be fired. With the Memphis Grizzlies at the center of it all, you gotta love this time of year.

Currently holding onto the ninth seed, the Grind City’s staring down a myriad of different outcomes. Should the Golden State Warriors drop their upcoming games against the top-seeded Utah Jazz and Phoenix Suns, the Grizz have a decent shot at hopping up a spot, thus allowing them some insurance should they drop the first of their play-in games. Then of course, comes their opponent. There are three franchises within two games of the eight seed, meaning there’s about ten potential sequences of opponents for the Grizzlies for the play-in games alone.

As such, it’s time to start thinking about ideal outcomes. With a smattering of big-name opponents at stake, it’s truly a fascinating exercise. Would you rather risk going up against a worse Lakers team (at least by record) that boasts the high-profile threats of James and Anthony Davis, or face off against a team like the Mavericks, who boast a better current record but might not bring the same big-market appeal? A week out from getting our answers, let’s take a loosely-ordered look at the most dangerous opponents for Grind City.

This may stand as a bit of a hot take (it’s certainly a homer take, having been raised in the Bay), but I think the Blue and Gold pose the biggest threat to the Grizzlies. Though Memphis has split the season series against the Dubs, the fact that Stephen Curry missed both of those games has to pose some concern. Guarding the two-time MVP is nothing short of counterintuitive–you have to press up when you’d normally retreat, double-team in unique ways, and deal with his multifaceted two-man game with Draymond Green. Given that the Grizz missed out on 96 minutes of learning how to counter the league’s signature flamethrower, their lack of experience puts them at a disadvantage.

Moreover, the Dubs present a couple of unique weaknesses that could be the Grizzlies’ undoing. Opponent three-point shooting is one of the most pungent indicators of Memphis’ level of play: they only give up 33% from deep in wins, vs. over 40% when they lose. Given Curry’s track record of monster performances as of late, the Warriors’ shooting threat will be a significant obstacle for the Grizzlies to overcome. Moreover, Steve Kerr may have cracked the code of limiting Memphis’ performance. This season, the Grizz are averaging a whopping 16 turnovers against Golden State, as well as shooting a horrid 42.5% from the field.

While Memphis is 0-3 against the Lake Show, I’d argue that they have a slightly better track record against the Purple and Gold. Memphis was able to contain LA defensively in all of their matchups, only allowing 105.7 points on average. Given that the Lakers are absolutely floundering as of late (2-8 in their last ten), the Grizzlies have a legit shot to run them off the floor, especially if LA overlooks the Grizzlies as they have in the past.

Of course, all this hinges on the question of Memphis’ scoring. The Grizzlies only averaged 97 points against Los Angeles, by far their lowest mark against any opponent this year. Fortunately, the Lakers typically excel at defending the three, only allowing 11.4 triples per game–that’s not necessarily taking away any of the team’s strength. Given that the team is averaging 117.6 over the last month, the Grizzlies at least have a puncher’s chance if they attempt to barrel their way through the paint.

That said, there is one last factor to address for the last two potential opponents: refball. If the Grizzlies manage to win their play-in game with either the Dubs or Lakers, it’s going to have to come in a blowout. Simply put, if the contest is close, you can bet bottom dollar that the zebras are going to have some influence. You think the NBA is going to try and allow one of James or Curry (who play for two of the league’s most profitable franchises) to fall out of the playoffs before the first round even starts? That ain’t happening. Given that the Lakers’ offense has sputtered out of the gates, I think they’re a little more likely to get blown out than Golden State.

I think Memphis has a decent shot against the Mavs, who’ve been resurgent as of late. Though Dallas’ recent winning ways have them looking threatening, Memphis played them about as close as possible in their last matchup, which they should’ve won if not for a Luka miracle. Given that the Grizzlies are still feeling the sting of that loss (on national television no less!), it’s almost a certainty that they’ll play the Mavs with fire, which has been somewhat of an issue for them as of late.

Dallas also has more exploitable weaknesses than any of the teams we’ve discussed so far. They turn the ball over at the league’s third-highest rate, which provides both an issue for their clutch-time execution and an opportunity for the Grizzlies to flex their muscle as one of the NBA’s best fast-break teams. Dallas is also susceptible to teams that shoot the triple with some volume. Given that they’ve yet to face Memphis with Jaren Jackson Jr in tow, if the Grizzlies’ snipers manage to spark a flame, the Mavericks could be in serious trouble if the Grizzlies come to town.

I rank the Blazers next simply because the Grizzlies know how to slow them down. After going 2-1 against Portland in the season series, Memphis still has another trick up their sleeve–the new starting lineup with Jackson in the fold. The Grizzlies have struggled defensively as of late, but their perimeter D hasn’t been what’s failing them. With the incorporation of Triple J into the starting lineup, Memphis’ new blend of size and switchability will prove a major stumbling block for the Blazers’ backcourt. Given that Memphis has scored 130, 120, and 109 against Portland, they’ll be able to put up points. If the defense holds up its end of the bargain, Memphis very well could go dancing.

The Spurs are last, which shouldn’t be too much of a surprise. Though any team with Gregg Popovich at the helm poses some inherent danger, San Antonio is more or less defanged. They’re one of the few teams also playing the gnarly five games in the season’s last seven days, meaning they’ll be as fatigued as nearly anyone else heading into the play-in. Coach aside, this team doesn’t have a stellar record in clutch games. Players like DeMar DeRozan and Jakob Poeltl spent time in Toronto during their crunch-time struggles, but more of their players have no record in big games whatsoever (Keldon Johnson, Devin Vassell, Dejounte Murray, and Lonnie Walker all spring to mind).

The Spurs also matchup terribly with the Grizzlies, who absolutely clobbered the hometown team in the last two matchups at the AT&T Center. While they turn the ball over less than almost anyone else in the league, they pose almost no threat for an offensive breakout, as they’re bottom of the barrel in both three-point makes and attempts. In a one-game series where a hot stretch of shooting could spell doom for the team on the other side, San Antonio’s lack of shooting makes advancing a significantly more difficult challenge.

With so many variables yet to be determined, there are a few factors that the team can fall back on. Obviously a higher seed will help the team fare better, but they shouldn’t be fretting too much. The team’s play improves on the road (20-15) compared to their record at home (14-18), so approaching an opponent from a lesser seed may actually be to their benefit. That may only be a small source of relief amidst the chaos of the postseason, but havoc in the playoffs is to be expected.  With so much young talent on their team, the Grizzlies will be dealing with it for a long, long while.

The Man To Man Podcast Episode XXVIII: Draft Grades Continued & Wild FCS Playoffs
Five Players to Watch Out For In The Play-In Tournament