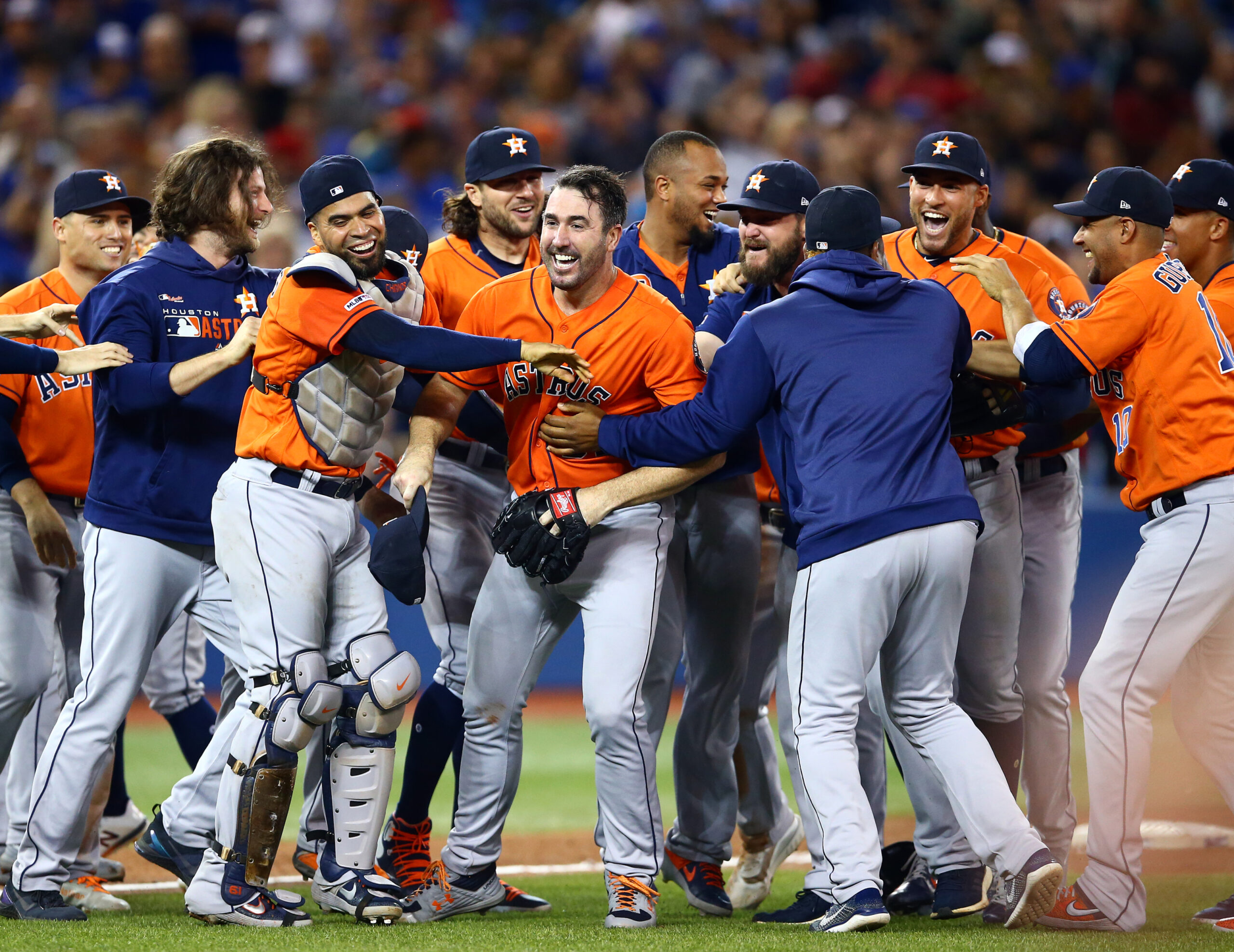 It’s the home stretch of the MLB season, and we are pretty much concluding where teams will stack, given a catastrophic disaster. The Houston Astros are holding firmly in first place in the AL West. They will likely clinch the division this week. While we await the MLB Postseason, here is my all time Astros “Terrific Ten,” which is an all time Astros starting lineup, followed by the best starting pitcher who played for the ballclub:

Although Biggio is mostly known for his position at second base, he spent the first four seasons playing catcher and did quite well, earning an All-Star nod in his fourth season. When at the leadoff spot, he smacked 53 career leadoff homers, which currently leads the National League. His overall career stats aren’t one to dismiss. He batted .281 with a career .363 on base percentage (OBP), 3060 career hits, 668 doubles, and 291 career home runs. He also was a speedy baserunner, with 414 stolen bases. As much as I would slide Biggio to second base, he’s the best offensive catcher Houston has ever had, and would be a boost to the lineup.

Jeff Bagwell is not only the one of the greatest Astros players of all time, but also of the greatest baseball players in the MLB. He was a 4 time All-Star, Rookie of the Year, and 3 time Silver Slugger. Like Biggio, Bagwell spent his entire career with the squad, batting a career .297 average, a .408 OBP, .540 slugging (SLG), adding up to a whopping .948 career on base plus slugging (OPS). He also smacked a career 449 dingers, and 2314 career hits in a span of 15 seasons. If he played a few more he would have definitely hit the 500 home run and the 3000 hit club. Adding on to his accolades, he was a fairly decent base stealer and wasn’t too shabby on defense, earning a gold glove. Lets not forget his monster season in 1994, where he won unanimous MVP in 116 games. It would be a sin to not include Bagwell in the starting lineup.

One of the more consistent baseball players in the game is none other than Jose Altuve. He is the longest current mainstay in the Astros organization. Besides 2020, Altuve hasn’t had a bad season. They’ve all been at least good, with several elite seasons from years 2014-2017. During these years Altuve batted over .310, had at least 200 hits per season, and an OPS averaging .882 in that span. His MVP season has been his best so far, batting .346 with a .410 OBP, .547 SLG, totaling out to a .957 OPS. At age 32, he is still one of the most feared hitters in the league, and shows no signs of slowing down. The 8-time All-Star and 5 time Silver Slugger is here to stay, which is why he’s in the lineup.

You can’t have Jose Altuve without Carlos Correa. While his tenure in the Astros regular season was slightly underwhelming due to injuries, Correa when healthy was a significant impact to the team. He came up big during the multiple playoff runs, which is essentially the most important contribution. The two time All-Star has career numbers that are currently .277 with an OPS of .835. Correa when healthy is arguably the best shortstop in the major leagues. His electrifying defense beats all opposing shortstops when he’s on the field. A career .981 fielding percentage across 864 games is pretty spectacular. Correa also was top 5 in the league in defensive assists. When healthy, he’s a beast on the infield and a bat with decent pop on offense.

This was a difficult decision, but prior to the Houston Astros’ dynasty, Ken Caminiti would have been the obvious choice at third base. Although Caminiti was solid, his prime years came with the San Diego Padres. Alex Bregman has only played six seasons but has already made a significant impact. His most notable seasons were 2018-2019, when he was named to two All-Star teams and finished top five in AL MVP . His 30.7 wins above replacement (WAR) for a third baseman over seven seasons is the best in club history. What’s other worldly is his strikeout-to-walk ratio.  In both 2018 and 2019, Bregman drew more walks than strikeouts. This season, it looks like he’s having another year with more walks than strikeouts. He’s got arguably the best plate discipline in all of baseball. Aside from his regular season accolades, he’s also no slouch in the postseason. His walk-off in Game 5 of the 2017 World Series and Grand Slam in Game 4 of the 2019 World Series are some of his most clutch playoff moments.

There wouldn’t be an All-Time Astros lineup without fan-favorite Lance Berkman. Arguably one of the top 10 players in the 2000s, Berkman was one of the many reasons the Astros found themselves in the postseason multiple times. Berkman is a six time All-Star and batted a career .293 AVG, a .406 OBP, a .537 SLUG, totaling a .941 OPS. If it weren’t for sluggers like Albert Pujols and Barry Bonds, Berkman would have had at least one MVP award. His best season was in 2006, were he batted .315, smacked 45 home runs, and drove in 136, which is still the highest single season record in RBIs in Astros history. If you ever need a power threat with consistency, look no further than Lance Berkman.

Cesar Cedeno played for the Astros during their early years. From 1970-1981, he was their starting center fielder, which was the majority of his prime. Cedeno batted a career .289 with the Astros across 1401 games. He was a 3 time All-Star and won the outfield Gold Glove five times. During his prime years (1972-74), the center fielder had season averages of 20 dingers and 50 steals. His raw power along with blistering speed made him a valuable piece on the team.  After 40 years, he still holds the club record of 487 career stolen bases. If it weren’t for his ankle injury in Game 3 of the 1980 NLCS against the Phillies, they could have made it to the Fall Classic for the first time in franchise history.

A leadoff Springer Dinger is always a good way to start a game. George Springer is another modern Astro who gets a spot in the lineup due to how deep the roster was when he was there. He currently ranks third all-time in leadoff home runs with 51. George is also a three-time All-Star (2017-19) and a two-time Silver Slugger Award winner in the American League. In 795 games with the Astros, he hit.270, 174 home runs, had a.852 OPS, and had a 131 OPS+. Let us not forget his incredible World Series MVP performance in 2017. Springer batted .379 with five home runs and seven RBIs with an OPS of 1.471. His outfield fielding ability and reaction time provided some insane highlight reels and game-saving plays for the team. Springer has a.985 fielding ability with 24 defensive runs saved in his 9-year career.

The DH position will be reserved for players who are known to rip the cover off the ball. Yordan Alvarez is the player in question. Since 2016, Astros fans have commemorated the anniversary of the August 1st trade of reliever Josh Fields to the Los Angeles Dodgers in exchange for the Cuban IF/OF. This is one of the most lopsided trades the Dodgers would like to forget. Alvarez has taken the league by storm since being called up to the Majors, and he’s only getting better. In 2019, he was named the AL Rookie of the Year after hitting.313/.412/.655 with 27 home runs and 78 RBIs in 313 at bats. He also became an All-Star in 2022 and was named to the All-MLB Second Team in 2019 and 2021. He’s hitting.304 with 37 home runs and 93 RBI this season. His OPS is 1.037, and he has a 193 OPS+. Alvarez is only 25 years old and is just getting started. The entire league is terrified of “Air Yordan ” for the next several years. It would be a shame if he wasn’t in the DH spot.

It was a close call, but Nolan Ryan will be the starting pitcher.  Ryan was a workhorse unlike any other, pitching nine seasons for the Astros and leading the team in strikeouts (1866), ERA (3.13), and FIP (2.87), the lowest in his career. When compared to the other teams he played for, his walks/9 were among the lowest. His best season with Houston was 1987. He had an ERA of 2.76 at the age of 40 and struck out 270 batters, which led the National League. Nolan Ryan is the best strikeout pitcher in the game. His career strikeout total of 5713 is one of the few baseball records that is unlikely to be broken in the future.

If I was the manager of this team, this is how I would place them:

The top three would be speed threats with the ability to hit it out of the yard, followed by middle-of-the-order sluggers. Bregman and Correa will bat seventh and eighth for stability in the bottom of the lineup, while Cedeno will fill out the ninth spot, providing more speed at the nine spot in case the lineup flips over.