Austin Spurs’ Tevin King: Basketball is More Than a Game 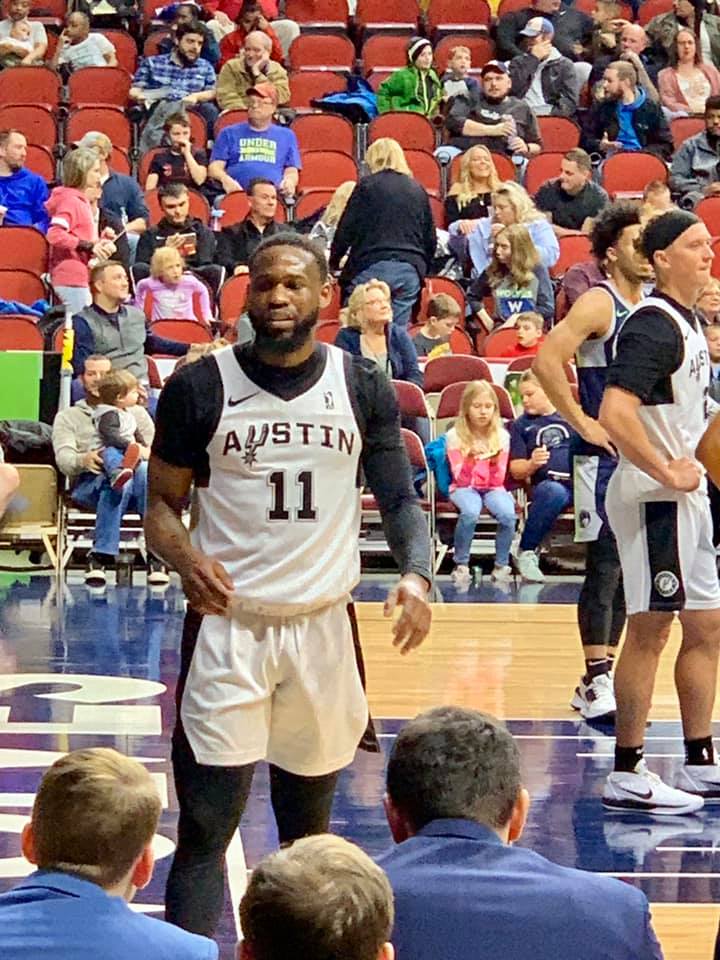 For many professional athletes the sport that they play is not just a game, it’s a lifestyle. This especially holds true for Austin Spurs’ guard Tevin King – “TK” is what his family, friends, and teammates call him – was introduced to the game of basketball just 12 months after he was introduced to this world. The people responsible for this simple gesture of love are none other than his mother and grandfather. Little did they know, this gesture of love would be thrown back at them in the form of a chest pass.

“I was one years old when my grandfather and mother first put a ball in my hands,” King recently told Back Sports Page. “I’ll say my curiosity grew and about 3rd grade is when I fell in love with the game. My mother and grandfather were my inspiration for my hoop dreams. Truthfully I think they would have supported me with anything I did, but the joy I saw on their faces from playing ball made me love the game even more.”

TK was born and raised on the West Side of Chicago, just a few miles away from the United Center, the home of the Chicago Bulls. Basketball is woven in the culture of Chicago. Michael Jordan gave something for this great city to cheer about, and the hometown kid Derrick Rose gave the city a shot of joy when he played for the Bulls. A side effect to this rich basketball history is that Chicago is home to many talented hoopers like TK.

“Truthfully my game is a model after Chicago basketball,” added King. “I have the skills necessary to get the job done and bring that grit and toughness.”

King attended Providence St. Mel (PSM) highschool, this is where we first met. I had the pleasure of being a part of his basketball journey as his classmate and teammate. During TK’s four years at PSM (2010-2014) the basketball team was very talented and well coached, but their road to State was a long and treacherous one, filled with heartache, growth, and pure joy. The PSM Knights fell one game short of State two years in a row before accomplishing this goal that every member of that team longed for, King’s senior year.

“Those two years made me really want to take my game to another level if I ever wanted to win,” King revealed. “My character really grew during those years. Making it down state was a great moment. It was everything I wanted and imagined for years, even though we didn’t make it to the championship game. My whole season was devoted to becoming the best teammate and leader I can be so that the team and I were ready when March came. I think I did the best I could do and in that process I gained brothers that I’ll have forever.”

King’s journey didn’t end there. It was time for him to make a decision on the route that he wanted to take on his road to accomplishing his goal of being a professional basketball player.

“My recruitment process was pretty good during the early part of my career,” said King. “I had a good amount of interest from some high major schools, but my senior year I picked up a few more mid major offers. I ultimately decided to do a post grade year and play prep ball after highschool. My prep year I just wanted to show schools that I was a point guard and floor general that they needed to have. I would say at the time not being heavily recruited my senior year didn’t discourage my NBA dream but inspired me to get better.”

After his prep year King decided to move far from home and play at South Dakota State University (SDSU). During his senior year (2018-19) he averaged 9.1 points, 5.8 rebounds, 4.2 assists, while shooting 51.2% from the field.

“I decided to go to SDSU because it had everything I wanted and a culture where I was able to be challenged and grow,” added King. “I had 24/7 access to the gym, I was around a winning culture and they treated us like professionals. I wouldn’t say it was tough being away from home. I was constantly on the road playing AAU since 5th grade, traveling all across the state and then there was the prep year in Wisconsin. Those experiences prepared me for not seeing my friends and family on a daily basis.”

Since March Madness is on the horizon, TK took out the time to reflect on his experience playing in the NCAA tournament.

“My first tournament journey was a work of art,” expressed King. “I was blessed to make it to three NCAA tournaments and one NIT appearance, and each year I was appreciative of the grind that came with it. I was able to develop my game and have my hard work shown on the court. Downstate was a good moment but making it to the NCAA tournament was crazy. Everything leading up to finding your seeding and playing in your conference tournament was amazing. It made making it to the tournament that much enjoyable.”

“As my senior year came to an end, I was really open to anything that I could get,” said King. “G League was definitely the more favorable option because of the opportunity you get from being able to have NBA GM’s and scouts at the games.”

Now TK is grinding to turn his dream into reality in the G League, he is currently playing for the Austin Spurs. He is averaging 4 points, 2.1 rebs, and 2 assists this season. His numbers, however, don’t tell the whole story of the valuable experience that he is gaining in the G League.

“My time in the G League has been a learning experience,” expressed King. “Being with the Austin Spurs increased my understanding of the game, making it much more clearer. I’ve grown a lot during my time here because you have to be ready everyday. I’ve learned that I have to rely on my good habits and the work I put in. Staying confident in my game and being professional about my approach to the game. This definitely made me appreciate the game that much more because I see guys picking up deals from the NBA or even great jobs overseas, from the work they put in here.”

King is in the homestretch of making his dream of playing in the NBA into a reality. He is thankful for having this opportunity and he has shown that he is worthy of this opportunity through his worth ethic and dedication to the game. He elaborated on when he knew he had a chance to go pro, and he also has some advice for young athletes that share his dream of going pro.

“My 8th grade year is when I was ranked the number one player in the state,” replied King. “I knew then that God gave me something. As an 8th grader I knew that if I wanted to take this route in life, God had already blessed me with the abilities I needed to accomplish my goal.”

“Some advice I would give my childhood self is to stay in the gym and work on your game,” added King. “Don’t let the outside noise play a factor in your development, and most importantly keep that fire burning and never stop having fun with the game. I want to tell the young men that’s out there grinding to make it pro to forget about the rankings and the stars and get in the gym. Work on yourself and develop your game. Learn the game and always have fun doing so.”

Tevin King’s basketball and life journey is proof that basketball – or any sport, for that matter – is more than just a game. The individuals who have chosen sports as a profession have turned their sport into a lifestyle. Constantly pouring their blood, sweat, and tears into the game they love eventually paid them back tenfold, in the form of joy and, for a select group of individuals, in money. I am proud of my friend TK for being dedicated to his dream and I congratulate him for all that he has accomplished so far. His journey is not over because he has more to give to the game of basketball.

Bulls Representation During All-Star Weekend
Was No Move the Right Move For Boston?