Baker Mayfield is the Browns Unquestioned Leader on Offense 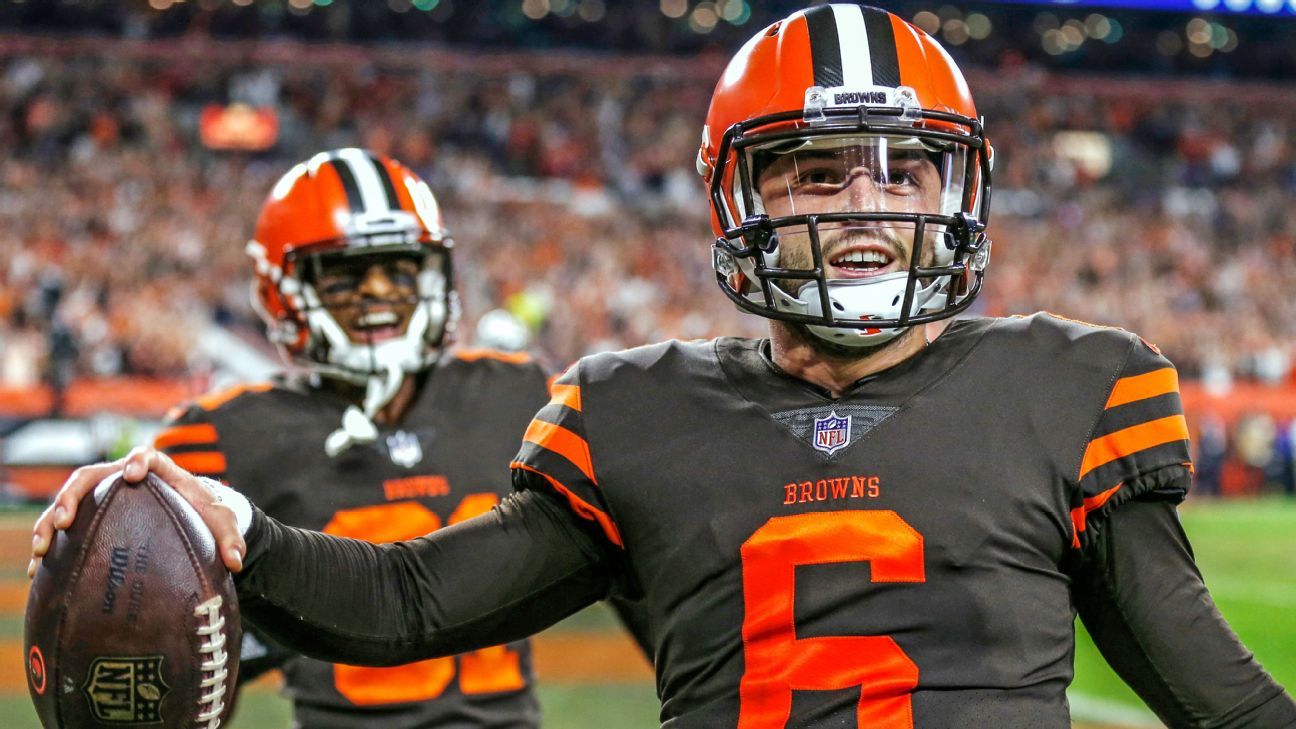 Even though the win over Washington on Sunday was really won with the ground game, it was also a great day for quarterback Baker Mayfield. The Browns made Mayfield the first pick in the 2018 NFL Draft. Mayfield took over the offense in the third game of the year in 2018, versus the Jets at home in a Thursday Night Game. From then on, all around Cleveland, people started to believe, quietly to themselves, did we just find our quarterback who will lead us to the promised land? Well, I can’t really say that right now, but with the first pick in the 2018 Draft, they took a leader who will guide them to new heights.

Everyone knows the leader on offense should be the quarterback. He touches the ball on basically every offensive play. In his rookie year, Baker was a leader. He had 3,725 passing yards, breaking a Browns record. You could tell from when he first stepped onto the field that year that he was focused and ready to go. Last year, with a new head coach Freddie Kitchens running the show, Mayfield took a step backwards. It was an odd happening because everyone was hyped for the Browns, and they had just acquired superstar receiver Odell Beckham Jr. Last season was a big disappointment to fans, as the whole team collapsed and they ended the season with a 6-10 record, that no one saw coming. On paper, they were one of the best teams in the NFL. Mayfield was one of the main reasons. He tried to force balls that weren’t there and tried to get the ball to OBJ as much as he could. Baker threw the ball at a 60% clip last season. He threw for over 3,800-yards with 22 touchdowns, but 21 interceptions.

During the off-season, Baker made sure to improve himself. He lost some weight, so he was more nimble in and out of the pocket. He also came into the season knowing he needed to prove himself. Everyone knows Baker takes hate and uses it against opponents, but this year there isn’t really much to complain about.

The Browns have a winning record heading into a game for the first time in six years. Six years people. Baker is one of the main reasons behind this surprising start for the Browns. He’s throwing the ball at a 63% clip with 564-yards and five touchdowns to just two interceptions.

So as we look back to the 2018 draft, I don’t know if I can say if the Browns drafted the best quarterback with the first pick. However, while they only got a very very good quarterback, they really got a five-star General out there on the field. On Sunday he spread it all around to his receivers. Rookie tight end Harrison Bryant and running back Kareem Hunt caught touchdown passes from Mayfield. After a game where he threw no interceptions and the team won pretty easily, Baker said in his post game presser that he “could have played much better.”

That’s a leader for you right there. He nearly played a perfect offensive game, and he still took ownership of his couple of mistakes. This was also the first time Mayfield hadn’t thrown an interception since week eleven last year. Another big reason why Mayfield seems to be thriving is that he truly likes running head coach Kevin Stefanski’s offense. While Baker doesnt get all the numbers he once did because of the dominating backfield of Hunt and Chubb, he doesn’t care because all he wants to do is win. That’s a true leader if you ask me. Don’t worry about stats other than wins, that’s one thing Baker and I have in common! Give me all the wins! Maybe we can once and for all remove the name “Mistake on the Lake.”

Overall Baker is just a good dude. Check out these videos. When he is mic’d up it is pretty funny and awesome.