Baseball in July: Looking for 42 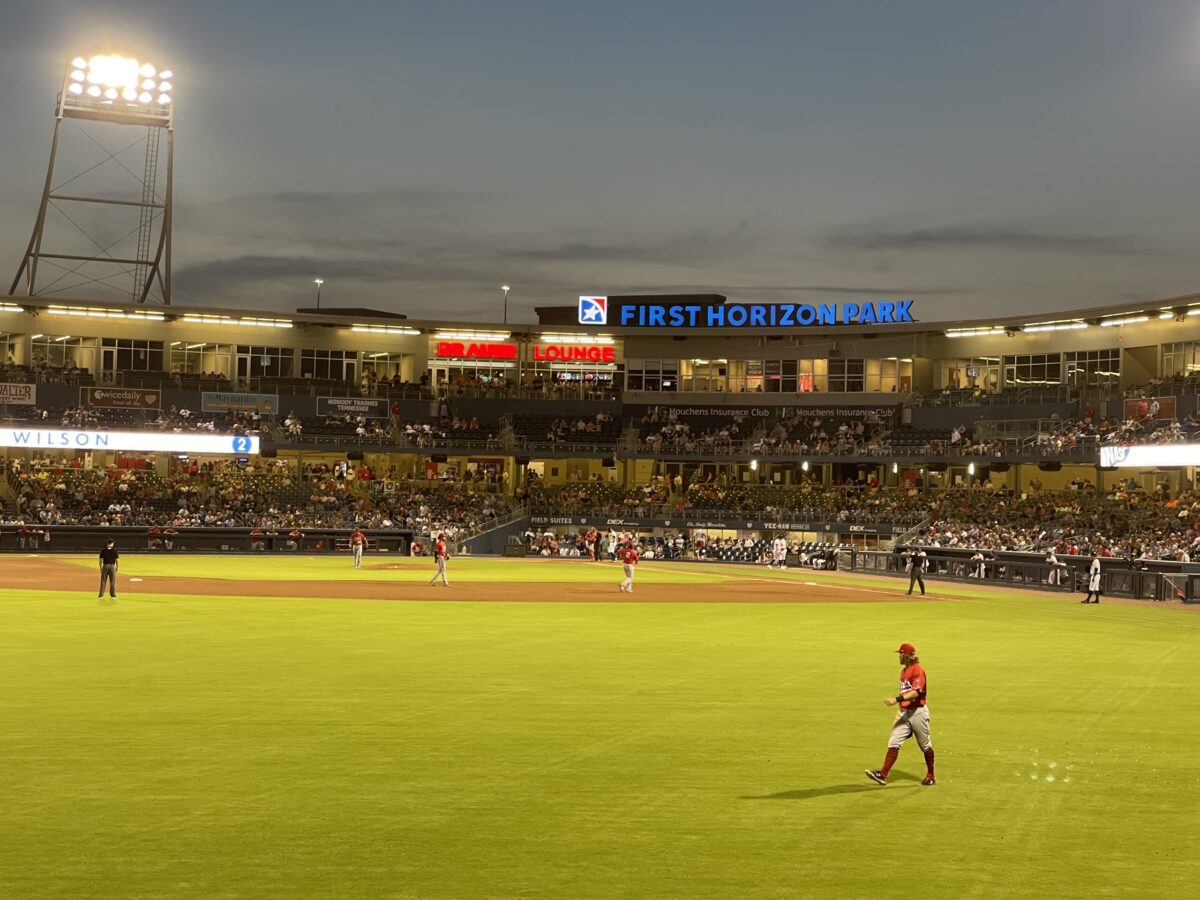 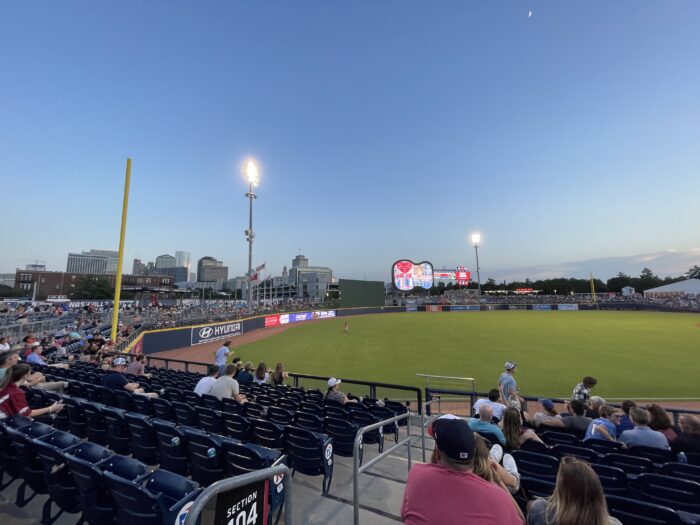 Tennessee, and all of the South, can throw it way, way back when it comes to baseball.

In the stadium’s concourse, photos hang of legendary Nashville players like Butch McCord and Junior Gilliam. The team retired Don Mattingly’s #18 and Skeeter Barnes #00 jerseys—along with, of course, Jackie Robinson’s #42. 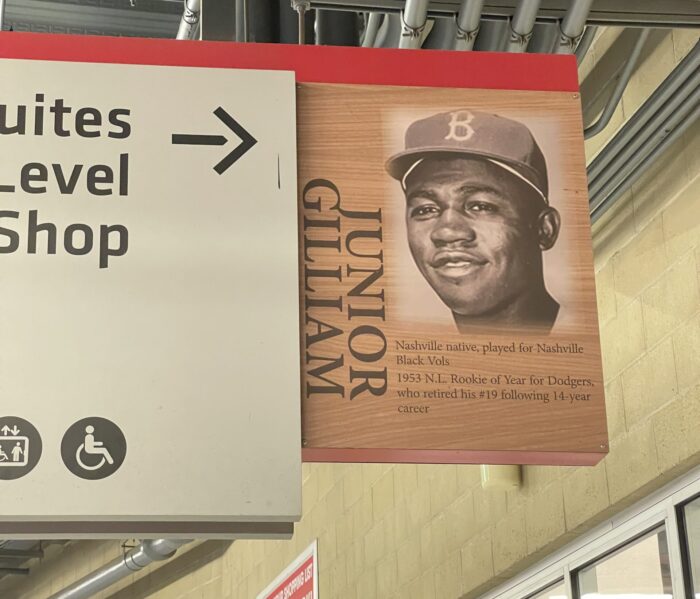 Robinson never played for Nashville, but he did play in Nashville at the city’s now defunct Sulphur Dell Park, which originally opened in 1885. He also watched multiple exhibition games in Music City.

In fact, the Brooklyn Dodgers called Robinson up in 1947, Tennessee remained a segregated state. That means, ironically, that if he had tried to play for the Vols, Nashville’s hometown minor league franchise, he wouldn’t have even been allowed a tryout. That team remained segregated until its eventual disbandment in 1961.

Now, sixty years later, progress has been made.

Butch McCord and Junior Gilliam, whose faces adorn banners in the stadium, both began their careers in the Negro league. Skeeter Barnes, whose 00 will never again be worn by a Sound, is a Black man. This season, at least eleven Nashville Sounds are people of color.

Throwback Thursday, however, highlighted more than just the racial complexities of Tennessee baseball. It also harkened back to another Nashville tradition: winning.

Both the Bats, the AAA Cincinnati Reds’ affiliate, and the Sounds, Milwaukee Brewers’ AAA club, put on a show Thursday night. Louisville chalked up nine hits, and Nashville added seven of its own. By the time the bottom of the ninth rolled around, the teams were locked in a dead heat—2-2.

Unlike other games, where I watched from the press box or the stands, I covered this game from the grass. The Zander Insurance Berm, located just behind the left field fence, lent a different perspective to the matchup.

The balls, when they come, fly toward instead of away. Their ghostly silhouettes against a sky phasing into darkness grow with the hopes of whichever batter just finished his swing. More often than not, a nimble outfielder snatches those hopes.

At least that was the case several times for Louisville players, like Mark Payton and Bo Takahashi, both of whom watched center fielder Lorenzo Cain catch their fly balls.

The action picked up again in the tenth inning, after the teams scored two more runs apiece and forced yet another round. I took notes, and I listened to the laughter and shouts of a lucky little league team congregated on the patio next to the berm. But mostly, I used the extra time to look for 42.

Professional baseball as a whole retired the number in honor of Jackie Robinson, the first Black man to play in the Major League. Some arenas, like Omaha’s Werner Park, displayed 42 as a permanent reminder of how far baseball has come and how many have sacrificed to get it there.

I couldn’t find a Robinson display in First Horizon Park. Although, it’s possible I missed it somewhere in the beautiful, 10.8 acre stadium. Certainly the structure honors both the history of the city and of the game. The Nashville skyline stamped behind the outfield would be impressive enough, but hovering in the foreground is the stadium’s 4,200 square-foot guitar-shaped scoreboard. Behind that, there’s a timeline tribute to Sulphur Dell, the Negro League, and prominent African-American players on permanent display.

The eleventh inning reverted my attention to the present, however. Nashville managed to hold the Bats scoreless and then, with two players on base in the bottom of the eleventh, Derek Fisher connected with a 2-2 pitch for a walk-off single.

The Sounds exited the field to the exuberant cheers of their fans, and as everyone joined together in celebration, I realized that I had been looking for 42 in all the wrong places. Robinson’s true impact was never about a number on the wall. His legacy lived in the faces all around me—Black, white, and brown—and in good baseball on a summer night. 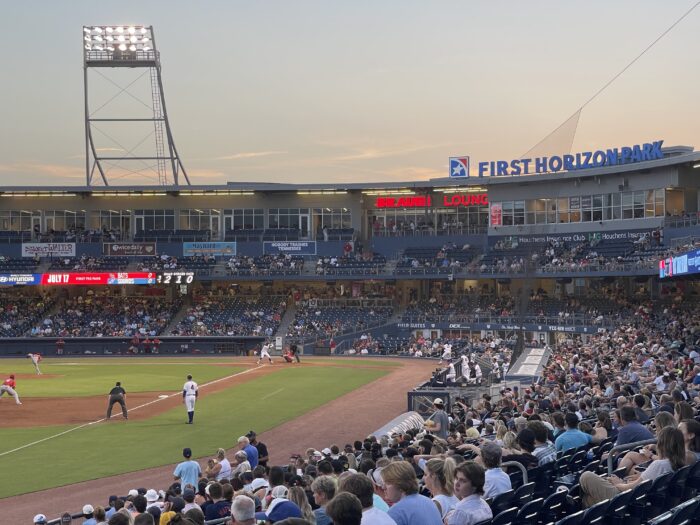 This article is part of the ongoing series Baseball in July. Click here to read the previous story.

Baseball in July: Six Degrees of Separation
A Rough Week For Team USA, But No Need To Panic Just Yet