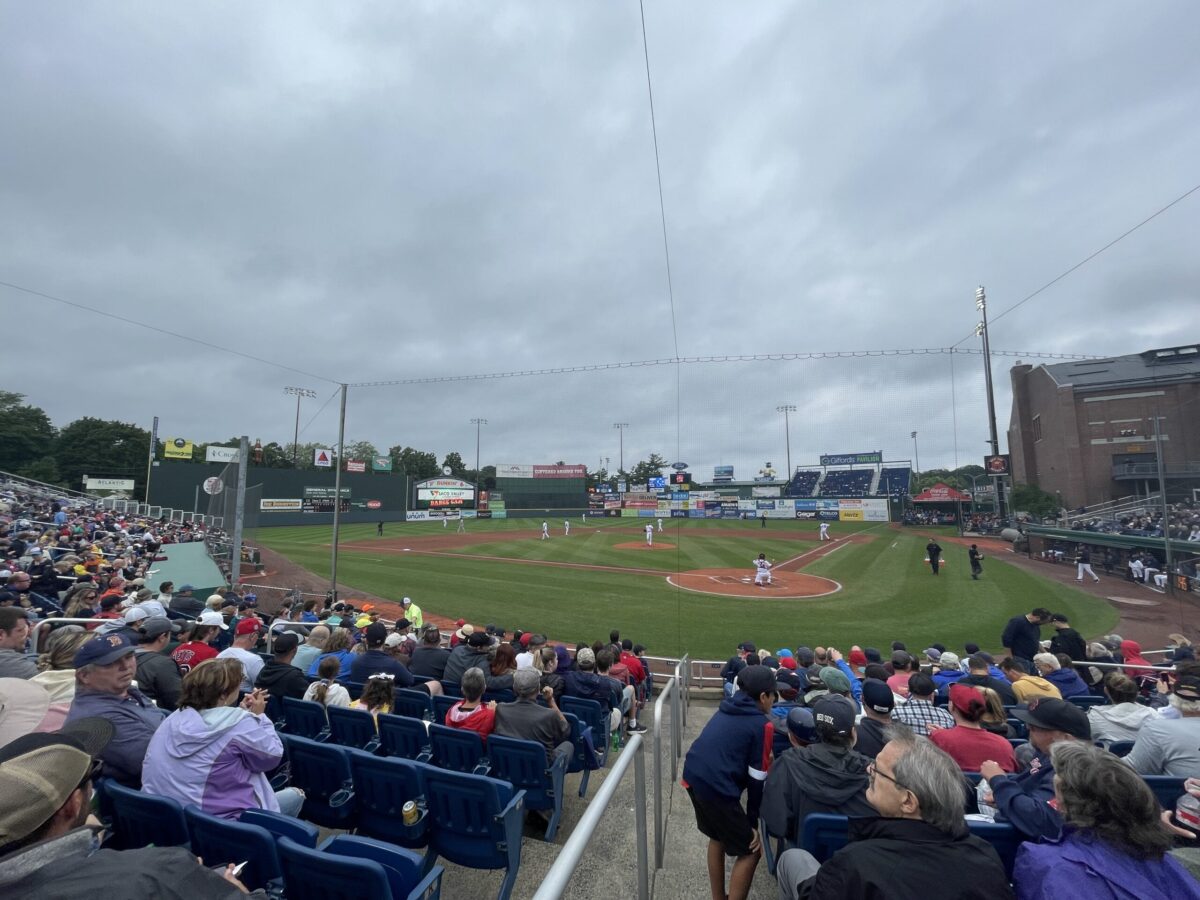 The rain delayed the Portland Sea Dogs July 25 game against the Harrisburg Senators. In so doing, it also delayed the inevitable goodbye I have to bid this summer series. I didn’t mind. Baseball never seems to last long enough anyway.

In the history of rain delays, though, Sunday’s was a brief one. After six scheduled Sea Dogs games already being postponed due to inclement weather this month, everyone at the stadium seemed relieved to simply hang out or wander for 45 minutes before the opening pitch instead of going home. 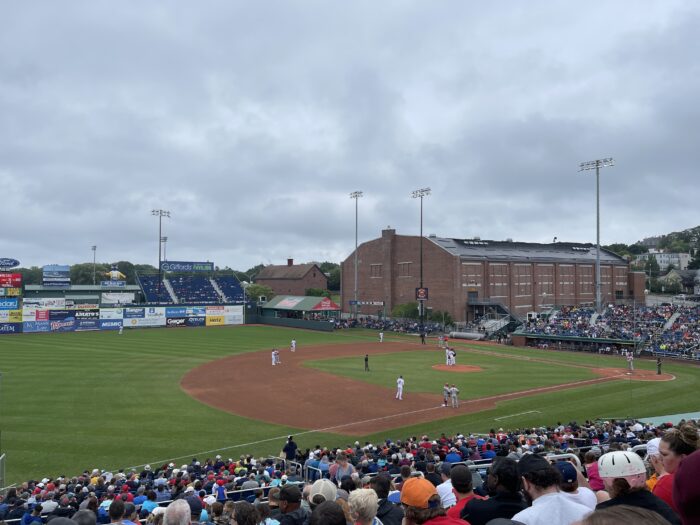 Portland, sitting at the top of the AA Northeast, made it worth the wait.

The first inning ran smoothly for both pitching teams. I watched from the cheap seats. For my last game in July, I wanted immersion—in the fans, the weather, the game. The metal benches designated for all general admission ticket holders were cold and puddled with rainwater. I could have been at a little league game instead of a slightly blustery day in the Minor League, and that sameness, that one size fits all when it comes to fans and baseball, has to be part of what contributes to the game’s enduring charm.

After all, Hadlock Field, where the Portland Sea Dogs play, is a classic ball park. Red dirt, white lines, green grass. Even the feature that sets the stadium apart ties it back more closely to the mythos of the game. In left field, rising above the manicured grass, a green wall rises. It’s called the “Maine Monster.” Because the Sea Dogs, of course, are the AA affiliate of the Boston Red Sox. Monsters must run in the family.

By the second inning, after my jeans thoroughly soaked up all remnants of lingering rain puddles, the Sea Dogs picked it up. Short stop Ryan Fitzgerald homered out of right field. Then in the third, first basemen Pedro Castellanos and Tyreque Reed added to the tally with home runs of their own.

Harrisburg, the AA affiliate of the Washington Nationals, refused to lose without a fight, however. They hit several singles and a home run, eventually forcing a tenth inning.

Even in the most intense moments, though, like when right fielder Rhett Wiseman hit a double in the top of the ninth for the Senators, scoring two runs and tying the game, the crowd never seemed to lose hope or focus.

Monsters must not be the only thing to run in the New England family. So, it seems, does devotion.

The crowd on July 25 paid attention. Before what could be a strike three against any Harrisburg batter, they stomped their feet on the bleachers. Any time the umpire made a call that went against the home team, he heard about it. When coaches replaced Sea Dogs’ starting pitcher Chris Sale, the crowd stood and cheered him on until he ducked into the dugout.

The game, as robust as it sometimes seems, requires attention. It’s old, after all. It’s of a different era, built for radio and box scores. The human voice can travel at the same speed as the ball and narrate the action as it happens—“going, going, gone!”

The innings, too, seemed to be going, going, gone, and with them, my time left on this journey. It felt fitting that as I sat in historic New England, a line from the musical Hamilton kept flashing through my mind.

The idea was that when George Washington refused to run for a third term as president, he wanted to give the nation an opportunity to move on. He wanted to, in the words of Lin Manuel Miranda, “teach ‘em how to say goodbye.”

Undoubtedly, baseball is part of America’s legacy, and the game can teach many things. It just so happens to be especially good at dramatic farewells.

In the bottom of the tenth, with the score tied 5-5, Sea Dogs outfielder Devlin Granberg singled, and Pedro Castellanos scored. Just like that, Portland won.

The game was over. And, in a way, it never will be.

For as Donald Hall wrote, “Baseball is continuous, like nothing else among American things, an endless game of repeated summers.” 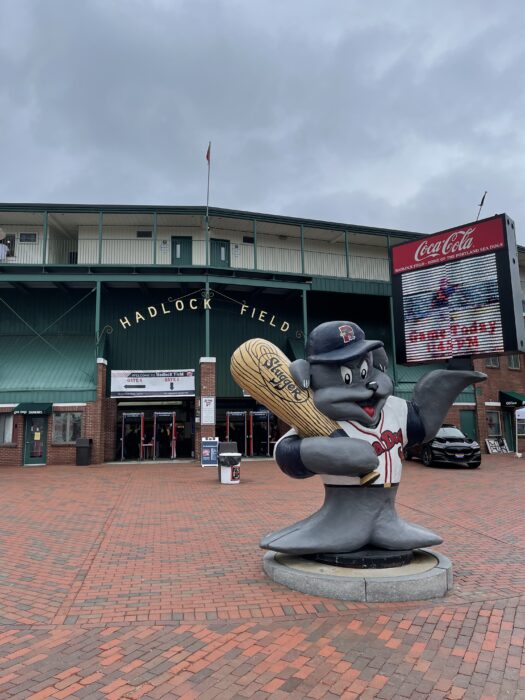 This article concludes the series Baseball in July. Click here to read the previous article.