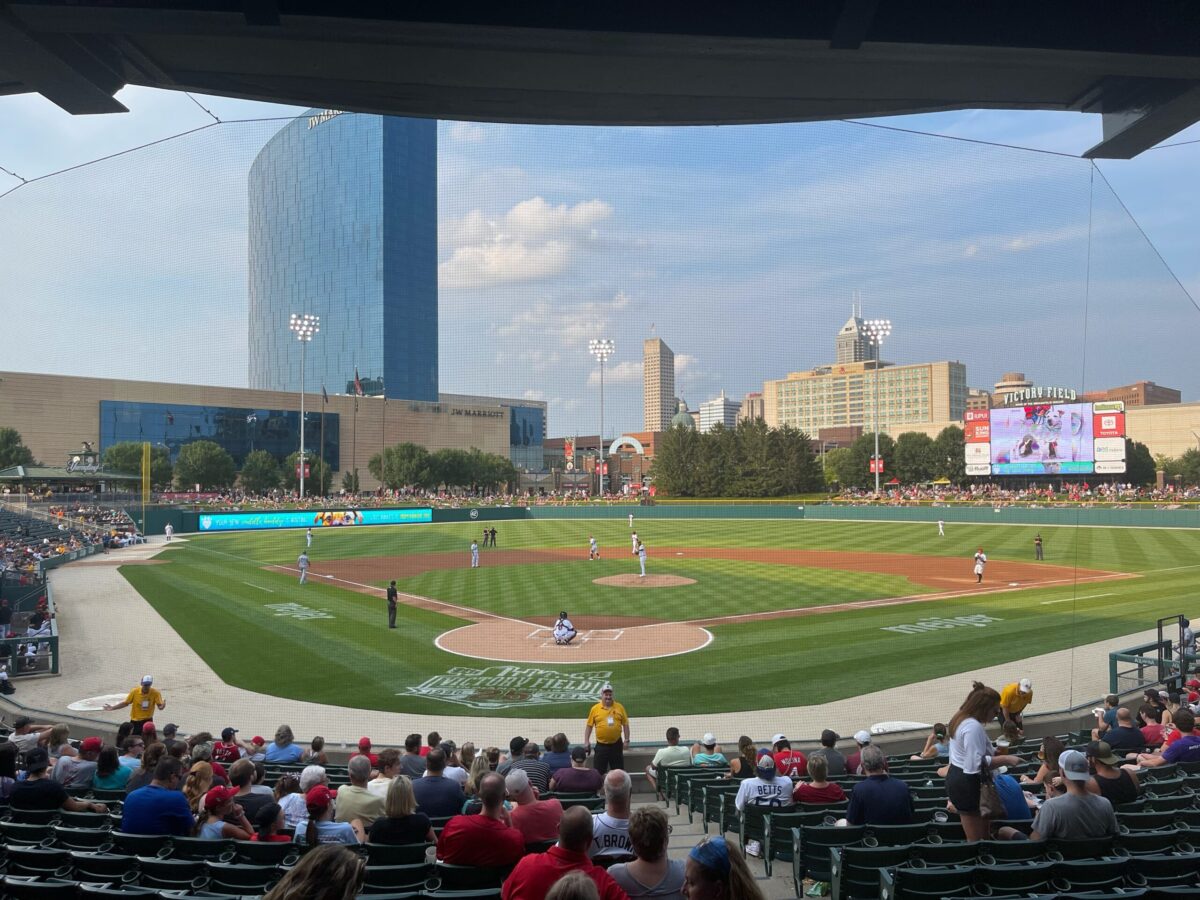 Last Friday, on July 9, I watched the Omaha Storm Chasers beat the Toledo Mud Hens. Tonight, five nights and 611 miles later, I caught up with them again. This time in the shadow of the JW Marriott building at Victory Field, I watched Omaha hand defeat to the Indianapolis Indians.

In baseball, it’s a small world.

In the long minor league AAA season, comprised of 144 games, Indianapolis will take the field against Omaha 17 times. That’s 11% of their total games for the season. The Indians plays Iowa even more often, with 19 games scheduled between the two midwest rivals.

Whatever strengths and weaknesses the players have, they will be known and almost certainly exploited by the end of the summer.

On July 14, which— much to the chagrin of my absent dog—also happened to be Bark in the Park night at Victory Field, both teams had their strengths on display.

The Indians, the Pirates’ AAA affiliate, and the Storm Chasers, Kansas City’s AAA team, swapped runs in the first and the fifth, and both teams notched another run each before the end of nine. As the game entered extra innings, the defenses looked prepared. They’d seen each other before, after all.

Omaha, for example, knew that outfielder Chris Sharpe and catcher Christian Bethancourt knocked in RBIs the last time they faced each other, 24 hours earlier. Indianapolis knew that back in May, the Storm Chasers swept the series six games to none, in large part because of the Indians’ seeming inability to stop Omaha from racking up runs. The Storm Chasers scored six or more in four of the six game series.

As the summer wears on, that familiarity only grows. The degrees of separation between teammates and opponents are few. The degrees between the future and the past are even fewer.

The tendrils of professional baseball quickly expand beyond just the players on the field and creep into generations and history as well. Google any name on the roster at random, and chances are, there’s a connection to be found.

Indians pitcher Tyler Bashlor, for instance, played college baseball for South Georgia State. Jim Morrison, a now retired infielder for the Pittsburgh Pirates—the Indians’ Major League affiliate— donned the South Georgia State uniform as well. During his time in the big show, Morrison played against Ken Griffey Sr., who happened, during the 1973-1974 season, to play for none other than the Indianapolis Indians.

For a simple game, baseball weaves a tangled web.

Still, in the present, the game goes on. At the top of the twelfth, Omaha knocked in three runs, and Indianapolis only recorded two.

So at least a single line remains clear then. On any given night, regardless of past connections or future camaraderie, only one team can claim victory. On July 14, that team was the Storm Chasers.

And, of course, the dogs who got to attend bark in the park.