Beyond the Athlete: “HBK” Shawn Michaels 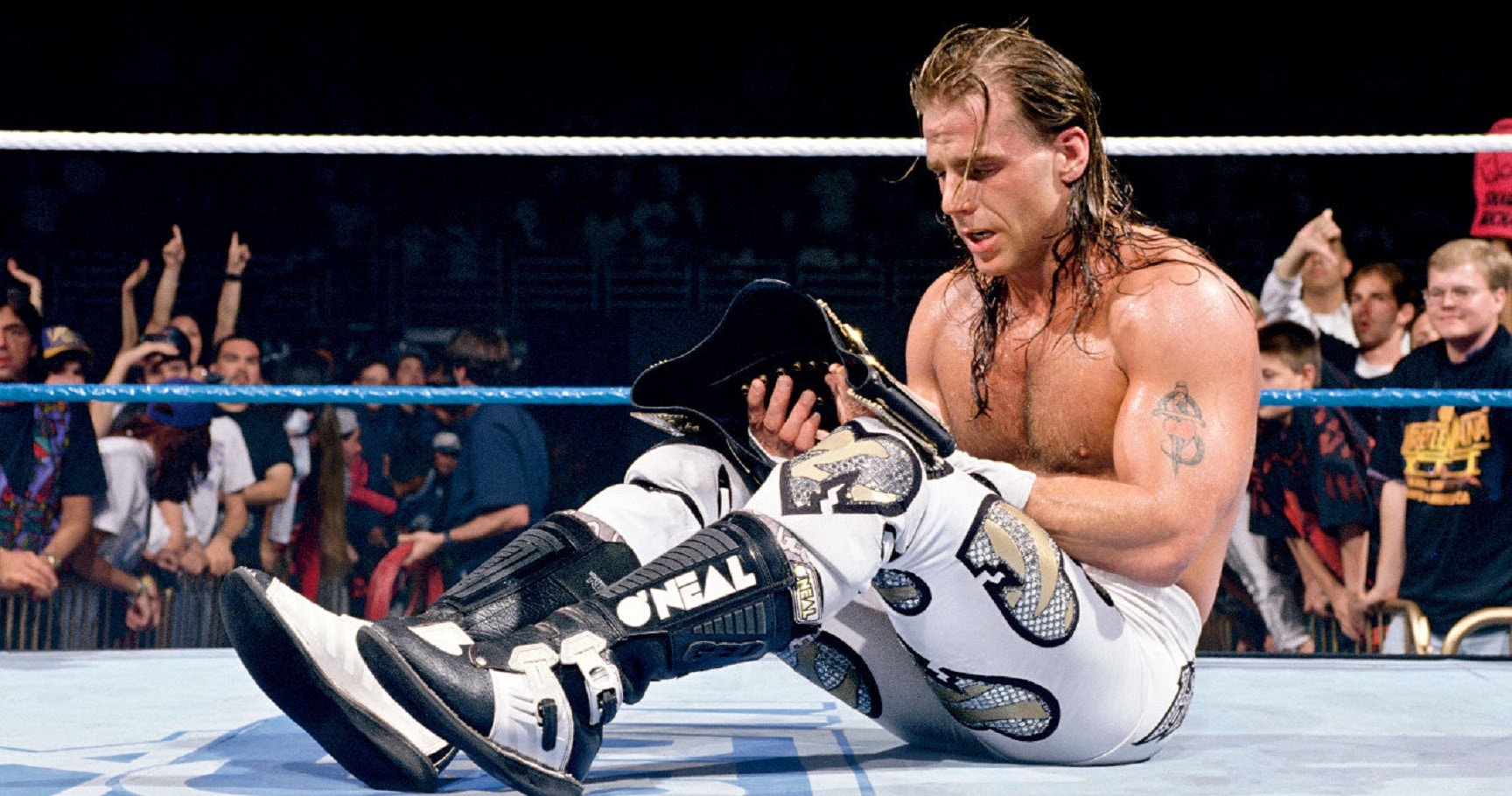 HBK burst onto the stage of the WWE in 1988 with tag team partner, Marty Jeanetty. Dubbed as the Rockers, the pair quickly became fan favorites, experiencing unmatched popularity from 1988 to 1992.

n 1992 Shawn went solo, skyrocketing to new levels of success, until 1998 when a back injury took him out of the game. It was during this time that he found the love of his life, Rebecca Née Curci, an employee of WWE rival, WCW. They married in March of 1999 had quickly had their first of two children. Despite his achievements both in and out of the ring, Shawn continued to battle with personal demons, which led him to John Hagee’s Corner Stone Church in San Antonio Texas. After some time, he became an integral part of the church and eventually, a bible teacher.

After a long hiatus, Shawn returned to WWE for what was supposed to be a one-time match. Instead, it was a new beginning; he stayed from 2002 until his retirement in 2010.

Shawn recently held a Wrestlemania raffle to raise money for the Ronald McDonald Children’s House and Cross Trail Outfitters. The winner received two tickets to Wrestlemania and to the Hall Of Fame Ceremony, which he was inducted in this past weekend.

Recently Randy Zellea of Back Sports Page conducted an interview with the“Heartbreak Kid” Shawn Michaels about giving back, his career, his love for basketball and his future plans. This interview took place the week before Wrestlemania 27.

Q: Can you explain the Wrestlemania Raffle?

A: The money goes to the Ronald McDonald house, Operation Home Front, and Cross Trail Outfitters. We are hoping that my name will help these wonderful charities. This is also a great opportunity for a lucky fan to go and enjoy the Wrestlemania weekend festivities. The winner receives two tickets to Wrestlemania and the Hall of Fame Ceremony, with the added bonus of hanging out with me for a little while. Go to www.theshawnmichaels.com for your chance to win. Hopefully this will be the first of many Wrestlemania raffles so we can help more charities in the future.

Q:Was there anything that made you choose these particular charities?

A: Yes. Kids, the military, and faith are all very close to my life. I was a military kid growing up. I have a brother and three nephews in the Army, Navy and the Coast Guard, respectively. My kids have had such a profound effect on my life and the Ronald McDonald House works with families with sick children while Cross Trail Outfitters exposes young men to the outdoors and gets them in touch with their faith. These charities are very near and dear to my heart.

Q: What does giving back mean to you?

A: I looked back on my years of traveling and realized that I had just been doing what I loved and wanted to do. Then I realized the effect I have on other lives, whether I like it or not. I have been doing this Twitter stuff now for the last six months, and that made me realize the extent of it all. In a position like mine, you really have to take giving back and contributing seriously. I have contributed to my family for the last 26 years and that’s all good because it is my first priority, of course, but that doesn’t mean I should exclude the people who are in need. This is something I have been doing for the last ten years, but an event like Wrestlemania provides an opportunity to help people on a much bigger level, and with the help of the WWE, that’s what I’m trying to do. One half of my life is over, what am I going to do with the next half of it? Retirement doesn’t mean I am done working. I have something to offer and a lot of help is needed. I will do the best I can to give back. There is a lot of need out there and I know I can’t do it all by myself, heck I don’t think we could collectively take care of it all, but the least we can do is try.

Q: You had a reputation for being a “disgruntled person” in the early stages of your career; did the changes you went though help you realize that you wanted to give back more?

A: I think using the word “disgruntled” is a pretty drastic understatement. The change was that Jesus Christ came into my life. It really is that simple. It is not fun to look in the mirror and admit that you are a no-good SOB. I did what I could to help and contributed when I felt my heart got tugged at. I give where I can and I feel proud of that.

Q: In one of your WWE DVD releases, there was a situation where you paid off a family’s house after the mother passed. Can you talk about that and other instances where you have given back?

A: We joke about it and say it’s not anonymous anymore. It was made known many years before the DVD came out. By that point the family and others knew, so we as a family felt comfortable putting it out. We have done a number of these types of things. It doesn’t really make me anything it just speaks to the change that happened, which has all to do with him (Jesus Christ). There are times I do things that I really don’t want to do. Sometimes my wife and I write checks that make us say, “Holy cow”, because it’s hard to give it away (laughs). Again, it doesn’t make me a saint!

Q: Kevin Nash recently told me he was a big NBA fan, and you are known to go to a Spurs game here and there. What are your feelings about the Spurs and being a fan with Kevin?

A: Kevin was a basketball player and he has all the knowledge. I can honestly say there is not much of an argument between us when it comes to basketball. When he and I traveled together, the Spurs were not the powerhouse franchise they are today. Right now they look very strong and Ginobilli is the key; if he plays like a mad man they are a tough team to stop. They are in the West though and they must deal with Dallas and LA. The West is a powerhouse conference; I know the East writers are pushing Miami and Boston but I think the championship goes through the West.

Q: Didn’t I read that you had season tickets at one point? Didn’t you kick the Mascot at a game?

A: When my wife and I first got married we had season tickets, but once we had kids we had to let them go. As the kids have gotten older we wanted to see if that was something they wanted to explore. I still keep up with them and go when I can. Every time we go, we have some sort of interaction with mascots. I find it flattering when you are recognized and have the opportunity to meet reporters or officials and they asked to be kicked. I prefer a handshake but they would want some sweet chin music. My son has developed a passion for football so we are going to make a trip up to Dallas for a game or two, next season.

Q: How do you feel about being inducted to the WWE Hall Of Fame?

A: I’m thrilled. I am very honored and surprised that it happened so quickly. Obviously I feel like it’s a huge compliment. It’s a similar feeling to winning the WWE championship. I have that little giddy school-kid feeling and I know I should handle it with composure. To say I am honored is an understatement. I have had an amazing career full of opportunities I had never dreamed of. I have a lot of respect for this line of work and this industry. My buddies are going to be there too, and that alone will make this special.

Q: Did you find it hard to try and re-create DX with your beliefs being what they are today?

A: We wanted to show the real me, a forty year old dad who is out of touch with reality and popular culture. Of course, we did it with a little more sarcasm, but there is no pleasing everyone. Some would love it and others would hate it. Not to sound ‘too biblical” but the bible speaks of futility and says never to get caught up in it, that’s what I do. I try not to get caught up with things I can’t control. I learned a long time ago that it is a waste of time. I know I am not the symbol of “Christian wrestling”. I am just the guy who went out there and did the best he could.

Q: Can you talk about some of your favorite matches?

A: There are so many good ones it’s hard to narrow them down to just one or two. I loved the match with Randy Orton where I couldn’t use the Super Kick because it challenged me to be creative. The funny thing is that some of the best matches I had were done in the house shows and not shown on TV. People thought my Wrestlemania match with Razor was something amazing, and it was, but we had been doing that for months in the house shows.

Q: What was the most enjoyable part of your career?

A: Probably when I came back in 2002. Getting a second chance at another great run was amazing. After my first match back, Vince asked me if I remembered him saying “When you won your first championship I said I wanted you to enjoy this, did you?” I said no, and this time around I did and it was a great story all the way to the end.