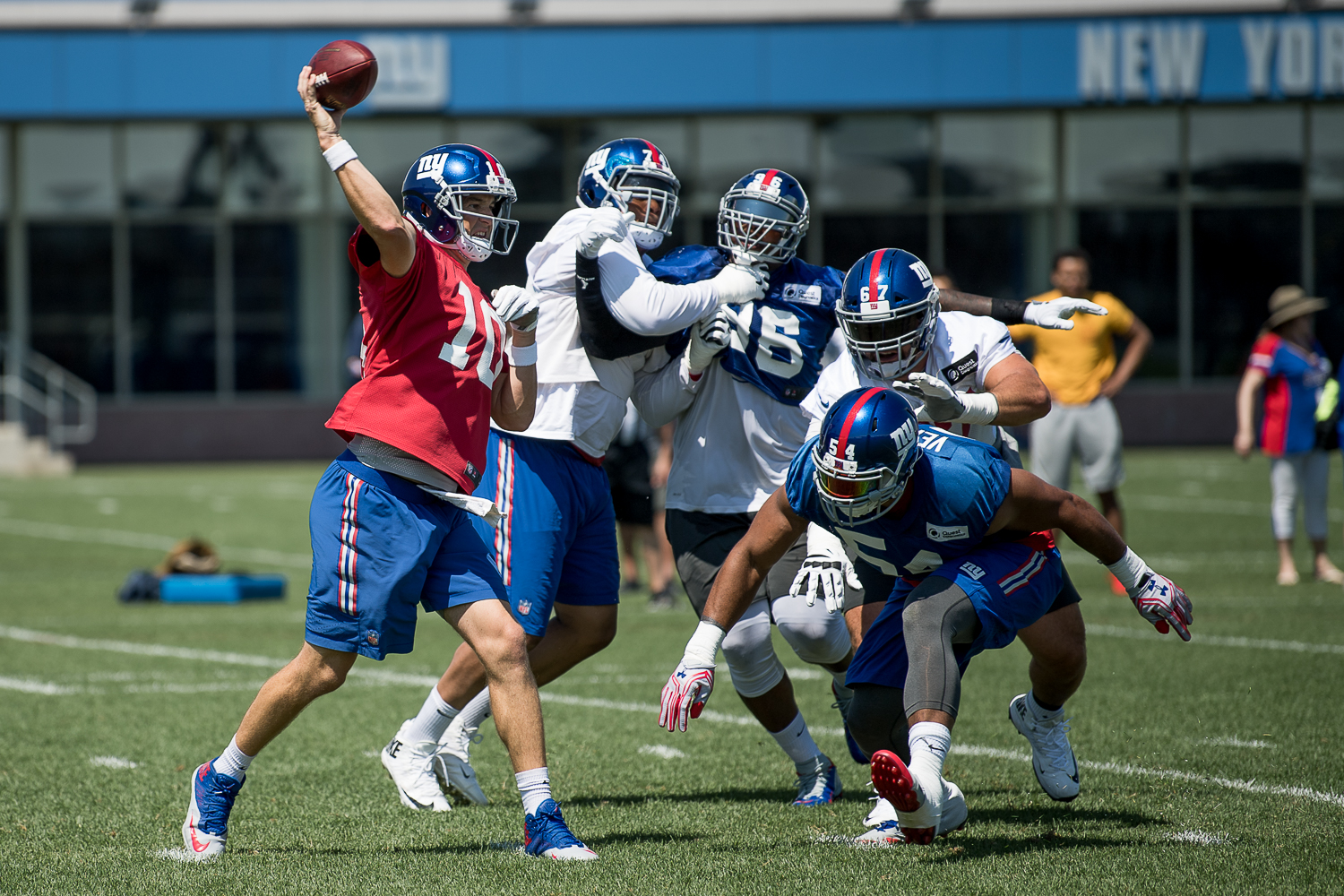 East Rutherford, NJ- The New York Giants have been waiting since January to get back on the field to play a game with meaning. The wait is almost over as the team leaves to head to Texas to play the Cowboys in the featured NBC game on Sunday night.

Big Blue went through training camp hearing the same questions about Odell’s injury, the offensive line struggles, the ability of putting points on the board, and can this defense repeat on it success from last season.

Lets ask them to address these issues. The media approached the team about the offseason as well as gearing up for Eziekel Elliot filled Cowboys back field.

Lets Start with the defense:

Damon Harrison was asked about this team being better then last season and he was quite frank about it. “ Because we’ve got a bunch of guys who aren’t comfortable with what they’ve done last year. Whether it be [defensive tackle] Robert Thomas, or [safety] Landon Collins. Nobody is happy, or satisfied, or content – whichever word you want to use – with what they’ve done last year. Last year doesn’t matter anymore.”

Harrison was also asked about the possible pressure that playing against this tough Dallas offensive line brings. “Well, it starts up front. We know about their all-world offensive line. You’ve got to give credit where credit is due, those guys work excellent together and they’re all so great individual players. So, anytime you have that – and [quarterback] Dak Prescott did an excellent job last year. He didn’t play like he was a rookie. And [running back] Ezekiel Elliott – I saw a stat, he runs for like almost 1,200 yards on first down? Wow, that’s crazy. On first down. That’s amazing.”

Jonathan Casillas explained to the press about how to prepare for an offense like the Cowboys. “Well, you’ve got to be prepared for everything. A running back like Ezekiel Elliott, he’s a downhill runner, but he can bounce outside. That doesn’t really make sense, but it does because he’s very versatile. He can be aggressive, he can duck his head and get those grind it out yards. But then he can beat everyone to the edge because he’s that skilled, he’s that fast, he’s that explosive. So, you know, we do have to be on point, everybody has to take care of their job and do their job on every single play. Or they will expose us. That’s point-blank, period. I feel like we’ve done a good job last year playing against these guys. The one touchdown they got in the second game, our eyes weren’t right and they got a free play because there was no one covering that guy. It wasn’t even a challenge and he just caught it. We can’t allow those. If we allow them to beat us by making mental errors and miscues and stuff like that, there’s a chance we can go down there and get blown out because we’re not on point, because they’re that good. We’ve got to be on our A-game – dot all of our i’s and cross all of our t’s – and go down there and play a perfect game, basically, to beat this team because they’re that good.”

Defense Coordinator Steve Spagnuolo stated he was preparing since day as if running back Ezekiel Elliot would be available and ready to play for Dallas. “I always go into any game – in a situation like that, to be honest with you – I went into the game three weeks, or whatever it was, expecting him to play. When it was unknown, where there’s a chance he could play or couldn’t play, we just expected him to play and prepared that way. Now, that’s what’s going to happen. So, we play Dallas and away we go.”

Finally Coach McAdoo was not surprised that Elliot was cleared to play. He was more focused on his own team. “No reaction. He is a tremendous ball carrier and we want to play against the best. So, we are excited for the opportunity.’

The Offensive Side of the Football

At Wednesdays practice, the members of media spoke with Sterling Shepard on if the two wins from last season gives the team an emotional edge. “No, I mean it’s a different season. Two different teams than we were last year. So, you kind of have to flush that down the toilet and move on. I mean, this is a new year for us and they have some new players there, we have new players here so, like I said, that’s all behind us. “

The Giants have had their own injuries to worry about starting in their receiving room starting with Brandon Marshall and Odell Beckham Jr.

Brandon Marshal opened up to the media this past week to the media on a host of topics including his health and it did not take long for Marshall to let us all know that he will be ready to go on Sunday. “Yeah. I’ll be out there. I feel good other than that hit I had in Cleveland, the body feels amazing. This is probably the only camp that I’ve had where I really didn’t have anything. So, that’s kind of encouraging being 33 and trying to be aware of where I’m at. My body – I try to keep track and try to be mindful of that so I know how to treat it, but I feel amazing.”

Marshall discussed on how surprised on how humble and approachable that Eli Manning was on the field. “I think the number one thing that stands out now after being here a couple of months is Eli being approachable. There was a play last week and I was just trying to gauge what I was dealing with. I’ve had a lot of situations like, ‘Wow, this guy is humble and he’s an amazing leader, amazing teammate.’ But, we had a route last week where we hit it, we were in the red zone, we scored and I went to him and I was like, ‘What did you think about it?’ He told me how he felt and he was like, ‘What do you think?’ I said, ‘I think it was off a little bit. I think we were a second late,’ and he was like, ‘Yeah. I could have done this and this and that,’ and I was like, ‘Wow.’ That was impressive for me to be able to give him that feedback and him receive that. He’s just awesome.”

You do not have to ask QB Ei Manning if he is ready for Dallas this Sunday night. Eli had a very limited schedule during the preseason and is very anxious to get on the field this weekend. “Well, I’ve had a lot of time to prepare for Dallas. Really all of last week, they told me don’t even look at New England and start prepping for Dallas. So, watched a lot of film and had some ideas. Coach McAdoo has told me some ideas, so I knew a decent amount of the plays that might be going in today. So, had a good feel for it and made some good plays. We have to keep that going.”

The Giants and Cowboys play on opening day for the third year in a row on NBC. Coverage starts at 8:30pm est.

Odell Beckham Jr is ready to go. But will he be medically cleared to play? He met with the media Wednesday and discussed wanting to be with his teammates on the field. “I’m itching to get out there. Let me just say that. We have a very good matchup. We have a very good game plan. It’s going to be a very good game. I know on this side – I don’t know what’s going on over there – but I know the Giants are coming with it. Set the tone for the season and really start things off the way we want and get us on the right path. So, I know for sure we’re coming with it and we look to take advantage of the mismatches and the opportunities they do have in their defense.”

Big Blue Report: The Next Steps..
FAN or FRAUD?