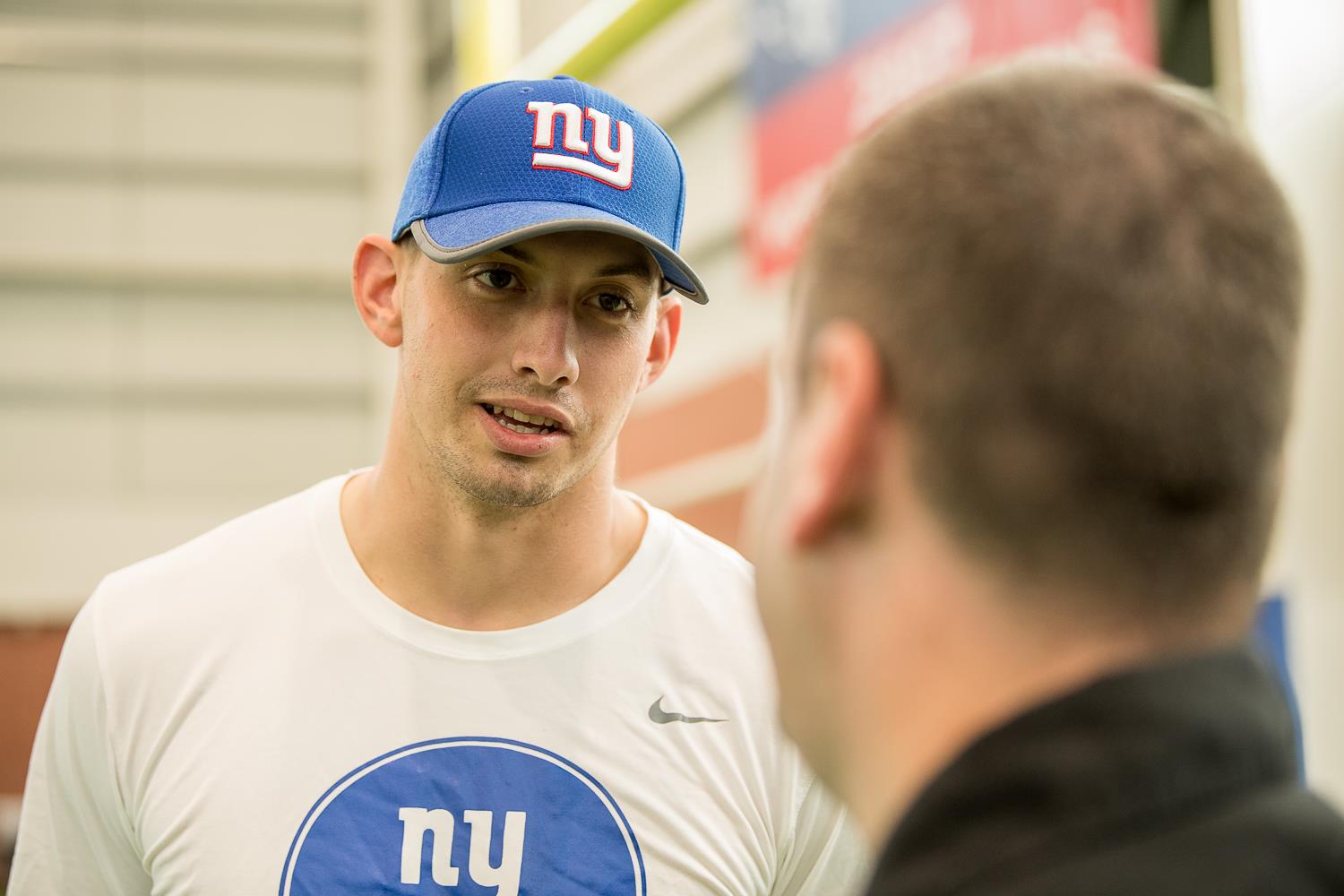 With the preseason upon us, the Giants decided to rest Eli Manning for the first preseason game against the Steelers on Friday night. With Manning resting this opened the door for the other three quarterbacks who want the role of Eli’s back up.

During the fourth quarter of Friday nights game against Pittsburgh, rookie QB Davis Webb took the field in his first NFL game. Webb who was chosen 87th overall in the third round of this years draft got a small taste of his future. He was 8/16 for 67 yards and took one sack.

With Manning’s career winding down, Webb has the opportunity to fill the shoes of the two time Super Bowl MVP while learning from him. The preseason continues on Monday against the Browns on Monday where the rookie might get his next opportunity.

Randy Zellea of Back Sports Page caught up with Davis Webb after practice on Sunday to discuss his first training camp experience, his first preseason game and much more.

Q: When you spoke with us on Friday you said you wanted to watch the tape before you can truly evaluate your performance from Friday. What did you see on the tape?

A:I have a lot of room for improvement obviously. I think I did some nice things and threw some good balls but I could be more consistent with progressions and my footwork especially. I think I did a pretty decent job and I was a little more consistent and it is something to build off of. I have not gotten a ton of reps in live situations so that was my first showing on film that I could see myself and I could work of the film I have now and I could dive in and get better for next week.

Q: Any nerves going out for your first game as a pro?

A: No, just really excited . I was really amped up. I think you were able to see it through that first throw. I was very excited to let one go but It was a little high so no nerves. Just a little excited to get out there and play with my teammates and we wish we won the game. Now we are on to Cleveland for the next game and I hope to improve on this one as well.

Q: You had us going in the press box a little bit with those first few throws..

A: Yeah, I came out swinging and we were not afraid to do that at all. It was exciting. I think I threw a nice fade ball and a few nice passes but I just have to gain consistency.

Q: What do you feel you still have to improve on with your game?

A: Obviously I have to work on quite a few things. I have not gotten a ton of physical reps or be in the huddle, take drops with live action. Mentally, I feel very strong and I fell like I have picked up the calls very well and shown confidence in the huddle to orchestrate plays. I feel that my understanding of the offense gets better and better every single day. Its a process because its an NFL offense.

Q: Do you find any frustration with this?

A: I wouldn’t say its frustration. I understand its a process and I know I have a ways to go but I know I could get there. I don’t think there is a doubt in anybody’s mind that I can be a great quarterback for this team. But right now, I know its a process and I just have to get better every single day.

Q:How has training camp been for you so far?

A:Just trying to steal reps after practice and get that footwork going. Just trying to throw the ball as much as I can to receivers, tight ends and anybody I can so could keep stealing reps. I am getting everything mentally but physically I have to make sure I match up my footwork with the throws to gain a rhythm so I could be ready to go at anytime. I feel like I have done that and I feel that translated into an OK game and now we head to Cleveland.

Q: Last time we spoke, you were still adjusting to the NY/NJ area. Are you acclimated now?

A: I’m all moved in. I don’t go home much right now but I think we knocked out the four main restaurants in edgewater area. That’s sort of where I am moving around in that area code. I get back to the hotel pretty late at night.

Q:Are you active on social media?

A:I try to be off the grid and if they could find me they find me. Giants fans are everywhere. Doesn’t matter if they are a valet, waiters and waitresses, people in elevators, to tables next to us. They are everywhere. Its been a lot of fun to communicate with them about the up coming season. They are excited and we are too. If someone comes up to me wants to meet me I oblige them. I have been here for a few months and to get the recognition from this great fan base is awesome.

Q:What advice has Eli given you during this process?

A:I learn stuff from Eli every day. He has been telling me to just be myself and right now its all about football. The playbook is good enough and that is where your head needs to be. I have no issue with that I just have to put in the hours to make sure when I go in, I could run the offense successfully. That’s all I am about right now is football 24/7.