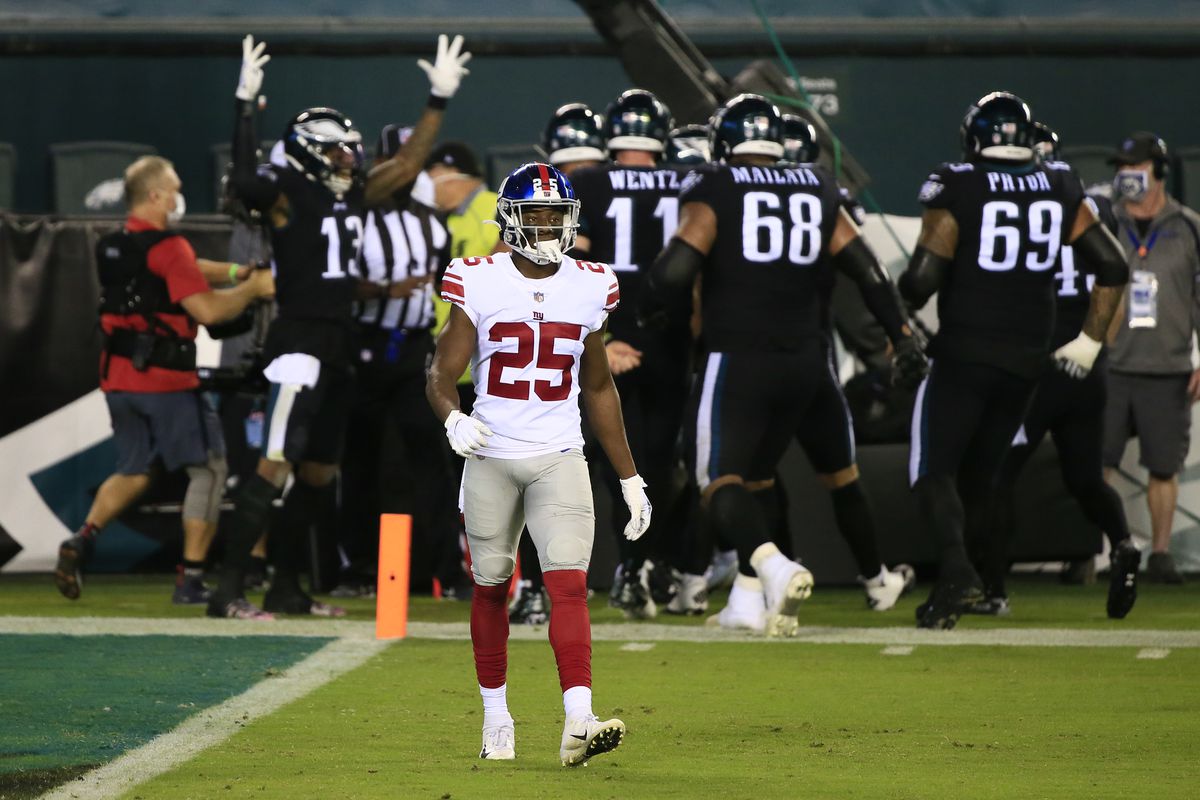 The tagline of this article could have been the New York Giants just ran out of gas in their 22-21 loss against the NFC East Division Rival Philadelphia Eagles. Big Blue gave up an 11 point fourth quarter lead to Philly as the NFC Least ..I mean NFC East has been up in the air in futility.

The Giants lost their eighth consecutive game to the Eagles and their seventh in a row in Philadelphia. To put the streak in perspective, only Sterling Shepard is the only Giant who was on the roster for the list win against the Eagles.

“Yeah, it’s a division rival” said Evan Engram. “That streak is definitely too long. We were close to getting one today. We’re not really worried about the past, but today was one we had and just didn’t finish.”

The Giants led in the fourth quarter, 21-10. This was the second game this season in which they lost after leading by at least 11 points. The previous game was two weeks ago against the Cowboys.

Daniel Jones made his first career start in Philadelphia, completed 20 of 30 passes for 187 yards, two touchdowns and one interception. Jones led the Giants with 92 yards rushing on four carries.

Jones had the longest run by a quarterback in Giants’ history when he scampered for an 80-yard gain to set up a touchdown in the third quarter. Jones could have had an 88-yard run, but he stumbled and fell at the Eagles’ eight-yard line. Wayne Gallman scored three plays later to give the Giants a 14-10 lead.

“I just tried to run faster than I was running and I got caught up” Said Daniel Jones. “We finished the drive and scored a touchdown. That was a relief to me for sure.”

The Giants had chances and Evan Engram dropped a ball which could have kept a late 4th quarter drive alive. With the missed pass, Big Blue gave the Eagles the ball back with enough time for the game winning score.

“Obviously it sucked not making that play” said Engram. “The defense was out on the field. Whether they got the stop or the Eagles scored, we were going to get the ball back. So I was staying in the game, being ready for whatever. But, obviously, it’s frustrating, it’s not a good feeling not making that play and possibly putting the game on ice.”

The Eagles were led by Carson Wentz who was 25/43 for 359 yards, Two touchdowns and one interception. Wentz threw a 18 yard touchdown pass to Boston Scott with 40 seconds left to take a one point lead.

The Giants have had a number of heartbreaking losses this season as the Big Blue falls to 1-6 and the bottom of the lowly NFC East. But Joe Judge gave a great message to the Giants fan base after the game, sking them not to feel discouraged.

“We’re going to work hard for you guys, I promise you that” Said Judge. “I have nothing I can say right now that is going to make you feel better about how the game turned out, and we’re not going to make any excuses to the fans. We want to be out there on the field and put out a product that the fans can be proud of. Our guys are working for that and our players embrace the city. This is where we live now. This is our home. We want to make sure we represent this place the right way. We’re putting together a foundation for a team that we hope lasts.”

We want to play the right type of football for a long time” Judge Continued. “We’ve got a culture being built right now that is moving in the right direction. We have a lot of good football being played. Obviously, we have to clean up a lot of things. We have to eliminate mistakes and maximize our opportunities. In terms of the fans, I’m not going to ask you to be patient, that’s not your job to be patient. Your job is to go ahead and be entertained by us and what we put on the field. It’s our job to go out there and work and improve and give you something to cheer about on Sundays or Thursday night, whatever comes up. We’re going to keep working hard for the fans.”

The Giants are taking the attitude of learning not loosing as much as this was a tough pill to swallow, its important for a team to struggle to gain the proper experience. That goes for the coach as well.

This Giants team had to learn a new system on the fly with no Spring practices, a limited training camp and no preseason. The first quarter of the season is always fools gold in the NFL.

Now we are seeing what this team really is and the results maybe negative in the win now column but will lead to victories down the road. .