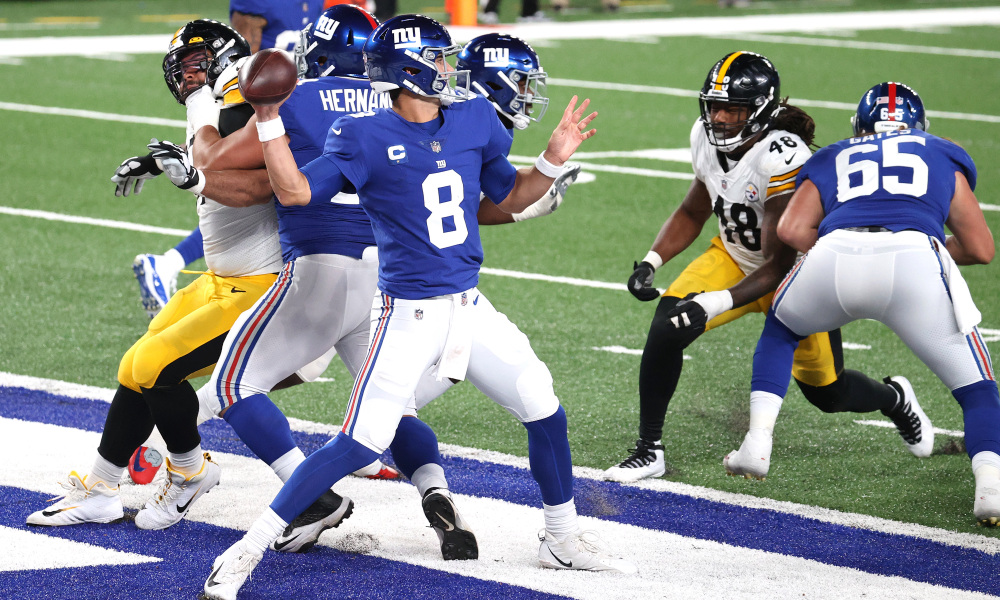 The New York Giants have lived by the motto improve 1% each day. If that was the case they should look at the loss against the Steelers on Monday night a 50% improvement as there were signs of hope for the future.

The Giants fell to 0-1 with the 26-16 loss with a solid performance from second year QB Daniel Jones. Jones finished 26/41 for 279 yards with two touchdown passes and two interceptions including a crucial throw in the thrd quarter on the tail end of a 19 play drivee.

“That’s definitely something you can’t have, 19-play drive and come away with no points, especially down there in the low red” said Head Coach Joe Judge. “That’s not acceptable, but I’m proud of the way he played aggressive, I’m proud of the way this team stuck together.”

The Giants recovered a punt on the three yard and only put three points on the board. Hoping to have third year star running back Saquon Barkley punch in the touchdown, the Steelers were able to keep Barkley in check.

Barkley had a tough start with 15 carries for only six yards. It was his second-lowest rushing total in a full game (he ran for one yard at the Jets last season). Barkley did tie Darius Slayton and Sterling Shepard for the team lead with six receptions, for 60 yards.

“I’m not really too concerned with the stats” said Barkley. “You have to give credit where credit is due. They have a great defense, especially their defensive front. They made some plays and we weren’t able to win the game today.”

Slayton, the second-year wide receiver, gained 102 yards and scored both of the Giants’ touchdowns, on passes of 41 and seven yards. It was the third 100-yard game of Slayton’s 15-game career and his fourth two-touchdown outing.

Daniel Jones was asked during his post game press conference about the chemestry with the second year receiver and was honest that it just works between the two of them.

“I thought Darius did a good job tonight, and he’s had a good camp and came in ready to go” said Jones. “I certainly have a lot of faith in him, I got a lot of faith in all those guys. We got out there, and I thought guys stepped up and made plays across the board”

Giants will be looking to bounce back this week as they hit the practice field on Wednesday to start prepping for the Bears this upcoming Sunday.

-Prior to the game, the entire Giants team lined up on the goal line nearest their locker room. The stadium’s four video boards showed a clip highlighting the organization’s #TogetherBlue campaign before a video of “Lift Every Voice and Sing” was shown. During the national anthem, approximately 15 Giants players kneeled. Joe Judge stood between two captains who kneeled – Jabrill Peppers and Dalvin Tomlinson – and placed a hand on the shoulder of each of them.

Steelers Prevail Over Giants In Opening Night Win
Heat vs. Celtics: Who’s Really Going to Come Out on Top