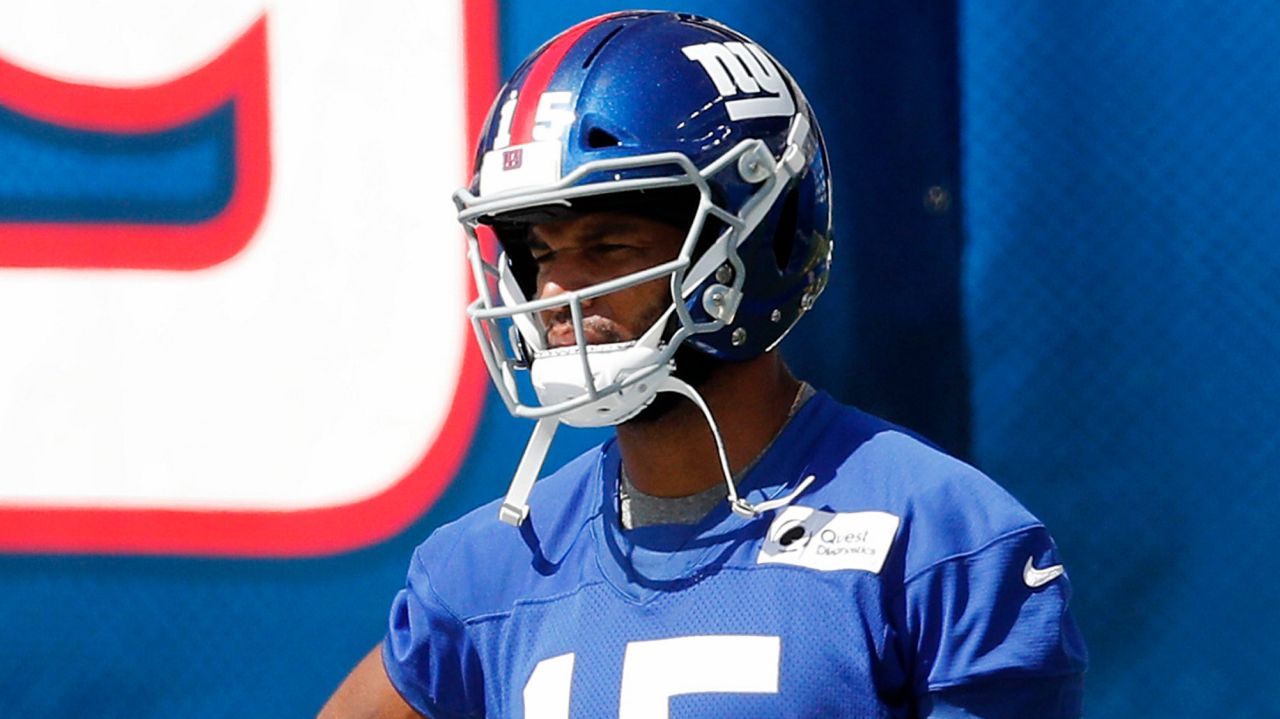 New York Giants Wide Receiver Golden Tate met with the media yesterday afternoon from his home to discuss the Saquon Barkely injury, the final OPI call made on Sunday, Daniel Jones’s progress and much more.

On the final OPI call at the end of Sunday’s Game:

“Just a very competitive play. I went back and watched the film. I think it was a close call. But the refs called what they called and it is what it is. I’m a believer in just not leaving it up to anyone but ourselves. If we handle business earlier in that game, then maybe we don’t have to even get to that point.”

If Joe Judge or his Teammates discussed the final play with him:

No, I didn’t have any conversations about that particular play with anyone really. Everything happens so fast. I kind of saw it as I was being competitive with Buster (Skrine) and just trying to find a way to get open. I don’t know what you guys think. What do you all think about that call?

The Frustration of not having all of the offensive weapons on the field:

“I know all of our guys, especially the guys that you mentioned, love the game of football, love competing and want to be out there every play of the game. I just know how important it is and how much we all were looking forward to playing together. For it to happen the way it did yesterday, I know we’re all kind of bummed because we are brothers. We love each other so much. It’s unfortunate, but that is the nature of the game. There are injuries that happen in this game every game unfortunately. It always hurts when you have guys like Saquon and Shep deal with an injury. But we’re just going to keep chugging. We can’t dwell on this. We have to just keep working hard and find a way.”

On Sterling Shepard and Saquon Barkley going down with injuries:

“I think we will be critical of this film. I know the receivers have watched it and have been very critical of what we could do better. I think everyone just must be accountable, and everyone must know our assignments very, very well. You look back at this game yesterday. If you give us a few plays back and maybe the outcome is different. Just dialing in, doing our jobs, play after play after play, and all 11 men on the field doing their jobs collectively. I think that’s where we’re going to take it. We’re going to have a great week of practice. We have great coaches. We have a bunch of really good players and we’re just going to find a way. Wins are never perfect. You never go back and look at a game and say ‘we played perfect.’ No. We’re just going to find a way. We’re competitive, and that’s it”

The guy’s love for the game is… I love it. I love to see it. It’s the most important thing in his life and he puts in the time. When we see him here, he’s always putting in the time. But also when he goes home, whenever I text him and have a question, he gets back to me quickly. If there’s ever a play that I want to look at on the film, he gets it right up and gives me his perspective. He’s one of those guys that’s just built to do this. He’s getting more comfortable in the huddle, commanding the offense and leading us. As you can see yesterday, he seemed completely comfortable late in the game. When we had a critical third down, he puts a ball on a covered receiver low so only he can get it and we make that play. Or on the fourth down, he takes off running to get the first down. The guy is growing each and every day, including during the week at practice. That’s what you want to see out of the leader of your offense and really the leader of the team. We’re all behind DJ. DJ can’t do this by himself. We all have to do our part, from top to bottom, consistently. When we do that, it’s going to take pressure off of him, it’s going to take pressure off of the offensive line, it’s going to take pressure off of the receivers, running backs, tight ends. It’s going to make it I think a little bit easier once we’re all just doing our jobs, play in and play out, and starting fast.

On The 49ers Not Liking The Turf at MetlIfe Stadium:

I’ve been ok over the years I’ve played at MetLife. I don’t have any problems with it. You can’t help but to think about where we are now two weeks into the NFL season and where we were three-four months ago, not having any OTAs, no time to be with the team. You can’t help but think that has something to do with it. But as far as MetLife’s field, I think it’s fine. But again, also personally, I haven’t played a game on it this year. But our guys last week did well, I thought.

The Trifecta – The NBA’s Eastern Conference Finals Confusion
Jose, Jose, Jose, Jose: Ramirez Walks it off in the Bottom of the Tenth to Clinch Playoff Birth