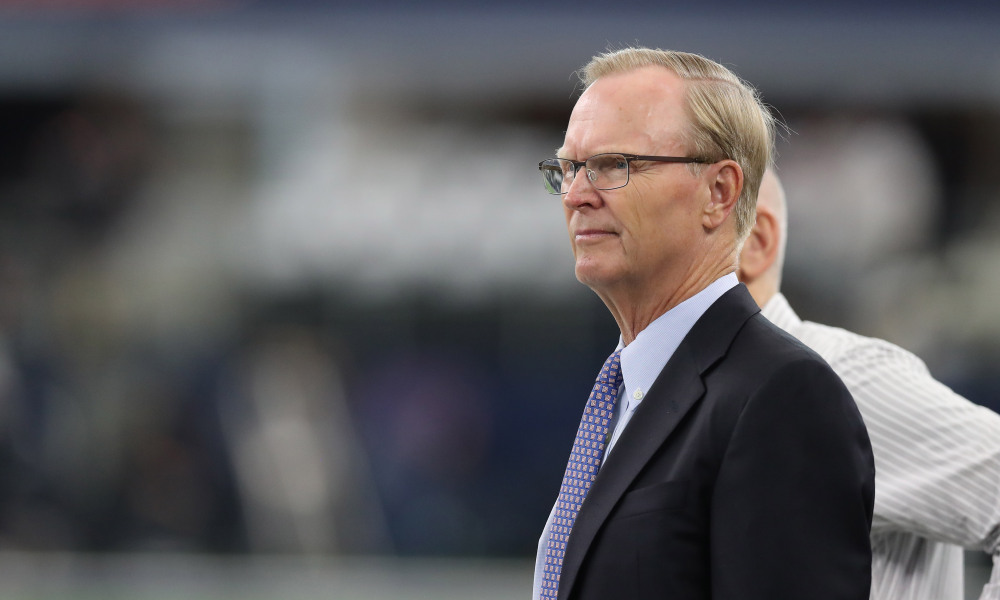 The Giants are in familiar spot. Like 2004, the veteran Super Bowl QB is showing the young kid the ropes for the future and Giants Jon Mara knows and understands it.

Mara met with reporters yesterday and addressed many issues including the QB situation with a veteran and a rookie. There was no surprise to anyone that Mara still supports and has faith in Eli Manning.

“I hope Eli has a great year and Daniel never sees the field” Said Mara. “That would be an ideal world. You’d like to see that. Again, at the end of the day, it’s going to be a decision by the head coach as to when or if Daniel ends up playing this year.”

Mara is still high on Rookie Daniel Jones as he does feel that the Duke product will eventually evolve in to the QB of the future for Big Blue. Patience is the key but he has promise.

“So far, so good. He’s everything that we thought he would be. He’s been terrific on the practice field, did a good job the other night. I think people need to temper their enthusiasm a little bit. It’s one preseason game, one series, but so far, so good.”

Exactly what many of us in the media has said that we all have to lower the expectation levels as it has only been one series down the field and a portion of the fan base want to prep the Hall Of Fame statute for young Mr.Jones.

The similarities between the two QB’s was a little odd to the owner though.though he looked at it as a positive. “When I first sat down with Daniel, it was eerie to me how similar. It was like talking to a 22-year-old Eli, which is a good thing. “

Though the questions were focused in the on the QB situation, Mara addressed his faith in his GM and Head Coach. Though he know improvements have to be made.

“I’m not satisfied with winning five games, but I think he (Shurmer) has us headed in the right direction. I think the players believe in him and we have a lot of confidence in him.”

When the moves were made this off season to move Odell Beckham Jr. and Landon Collins, Mara appreciated the guts of Dave Gettleman to make an unpopular move like that.

“You don’t like to see all that talent go out the door, but let’s face it, we had one winning season in ’16 and the other five or six years, nothing, not since we won the last Super Bowl, so we needed some drastic changes. Again, he had the courage of his convictions, he knew they would be unpopular moves, but he went and made them anyway. “

“I think the best thing for me about Dave is he makes decisions that he feels are in the best interest of the franchise and he doesn’t give a damn what people think about it, be it the media, or be it fans, or anybody” Mara continued. “He has the courage of his convictions, and you have to have that. He’s set about to try and rebuild this team and change the culture a bit in the locker room.”

“I think, as I said before, our last two draft classes were pretty strong, and that’s what gives me confidence going forward” he said. “I think we’re moving in the right direction. Again, until we start winning games, it’s hard to sell people on that notion, but that’s what I believe.”

The Giants are back in Pre-season action against Chicago this Friday night starting at 7pm!