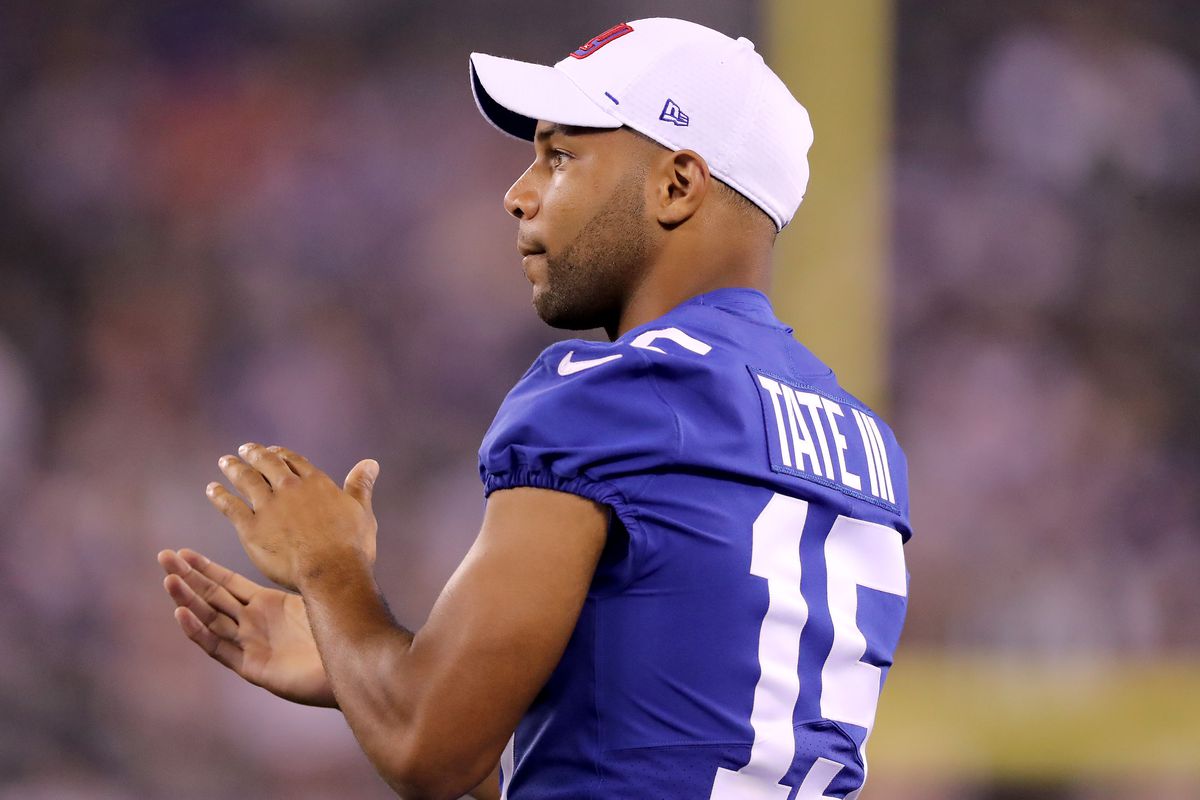 Golden Tate is entering his 10th season in the NFL. The 31 year old wide receiver is in his first year with the New York Giants. Tate will not be able to suit up until week 5 though as he has been suspended by the NFL for testing positive for PED’s.
Tate appealed the suspension, but the ruling was not overturned. The suspension was upheld. “I just thought after we looked at the facts and the situation that the NFL would be understanding. It’s kind of a non-tolerance policy. They upheld the suspension.” Tate on why he seemed surprised about the ruling.
The drug that Tate took was called Clomiphene. Clomiphene helps with producing kids. When asked how he found out that it wasn’t allowed, Tate said “A few weeks after my test, I went back and spoke to the doctor. Initially, the doctor said it was not a banned substance. In fact, he had given it to other NFL players, which is why I trusted it and kept living my life. I was out to dinner one night with a guy who worked for me and he started talking about another player who was getting suspended for something completely different. A light went off in my head and I said let me call the doctor to make sure, to make myself feel better. I asked him what the active ingredient was and he looked it up right then and there and sure enough it was a banned substance.”
Tate is very honest and open about the whole situation. He trusted his doctor because he did say that the drug was not banned, and that other guys have taken it. He said he would have checked with the league first if the doctor was unsure. ”I think ultimately because the doctor had said no, it’s not a banned substance and I have prescribed it to other NFL guys. If the doctor says I’m not sure, I would have 100 percent looked into it.  If the doctor never said he had never given it to other NFL players, I 1,000 percent would have looked into it. I’ve gone through the TUE process for a couple medicines and I completely understand it.”
Tate might take action against his doctor, but he is still gathering information and trying to get through training camp with his team for the time being. His statement about that, “We are definitely looking into it, we are kind of examining all of our options. This all came out a few days ago, so I’m still trying to get through camp, trying my best to focus and continue to be a leader for this organization, and practice hard.”
Tate is allowed to finish training camp, but once week 1 begins he is not allowed with the team until the start of week 5. This is tough for a veteran, but he is looking forward to his return more than ever. Tate said there is no doubt that this will fuel him even more when he returns to the field.
As for the mental aspect of this whole thing Tate is pretty much over the whole thing as it has been lingering for a couple of months. “I think you just take it day-by-day. I honestly think the hardest part is just about over. I’ve been thinking about this since April or May. This has been on my mind. I’ve lost a lot of sleep. It has kind of hurt me to my core having to explain to the organization what’s going on. I’m just ready to move forward. I just want to play football. Look at me, I’m not trying to cheat. I think I have represented the NFL shield pretty well in my career. I have achieved a lot of things, and I hope this doesn’t smear that reputation that I have worked very hard for.”